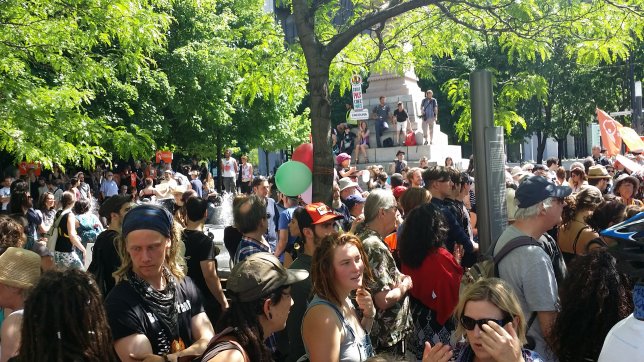 Federal Leaders Must Come Up With a Substitute for Oil

The longest election campaign in recent Canadian history is an opportunity to point to the contradictions of the major parties on the question of ecology. If there is one issue that touches simultaneously on economic development, the protection of ecosystems, public health, climate warming, transportation and the legitimacy of public institutions, it is the exploitation of the tar sands and the many pipeline projects for exporting the most polluting oil in the world.

Let’s say it straightaway: No federal party at this time has a credible plan to get out of hydrocarbons. They have not said where they stand on controversial projects like Old Harry, Anticosti or shale gas.[1] As long as Quebec remains in the Canadian federation, the Québécois are entitled to demand more from the parties that hope to govern in Ottawa, and that they take decisions that measure up to the issues of the 21st century.

It is in good taste to say that economy and environment should not conflict. However, we often overlook the contradictions between the imperative of unlimited growth of tar sands operations and the fight against climate change.

A brilliant journalist of the Toronto Star, Linda McQuaig, running for the NDP in Toronto, put her finger on the problem. During a television debate, she reminded us of an obvious fact on which there is scientific consensus: a large quantity of tar sands will have to remain below the ground if Canada hopes to achieve its objectives in the fight against climate change.

This simple factual statement unleashed a media storm in which all the leaders, including [the NDP’s] Thomas Mulcair, took their distance from this position. “When men cannot change things, they change the words,” said Jean Jaurès. And that’s exactly what happened.

These leaders hurried to characterize the New Democrat candidate’s statement as extreme! And to reiterate their support for the energy industry under the pretext that it provides well-paid jobs. Of course, since no one is against virtue, sustainable development, social acceptability and renewable energies, each was quick to promise environmental assessments, forgetting that these are all too often entrusted to agencies heavily influenced by people from the industry, in particular the oil industry.

In the end, the oil interests have imposed themselves on the politicians, twisting the meaning of words and harping on “business as usual.” Canadian petropolitics requires that no one disrupt the dominant economic and energy paradigm, where powerful fortunes have an interest in ensuring that nothing changes.

Another example of ambiguity on the part of the major federal parties concerns their positions on the many pipeline projects. In Quebec, we are of course concerned about TransCanada’s Energy East project, which will convey 1.1 million barrels of oil per day for export abroad, with tiny economic benefits and increased risks to hundreds of waterways and local communities. But there are also the Northern Gateway, Keystone XL and Kinder Morgan projects, as well as the projects for exploration and drilling in the deep waters of the Arctic and the Gulf of St. Lawrence.

In the case of Energy East, it is clear that the interests of Quebec are opposed to those of the economic elite that dominates Canadian politics. From this standpoint, petroleum is not only a national issue for us as Quebec independentists, it is also an environmental and social issue affecting the people of Quebec, the people of Canada, the First Nations and the entire planet!

What is desperately lacking in this election campaign is a global vision, a desirable, viable and realizable solution that will replace the relentless exploitation of hydrocarbons. In short, a credible plan that starts from “where we are now” and shows us the path to follow “to where we want to go.” This is not utopian, but showing realism, to carry out an energy transition toward a post-carbon economy by 2050.

As the philosopher André Gorz pointed out, it is time to think from back to front, to define the changes to be made by looking at the goal to be achieved and not to set the goals by starting with the interests of those who resist change. It is necessary, therefore, to go beyond a mere papering over of the current petropolitics. We need a prosperity based on sources of sustainable and ecologically responsible energy.

Amir Khadir is a member of Québec solidaire and MNA for Mercier in the Quebec National Assembly.

This article first appeared in French on the Le Devoir website. It was translated by Richard Fidler and published on his website Life on the Left.