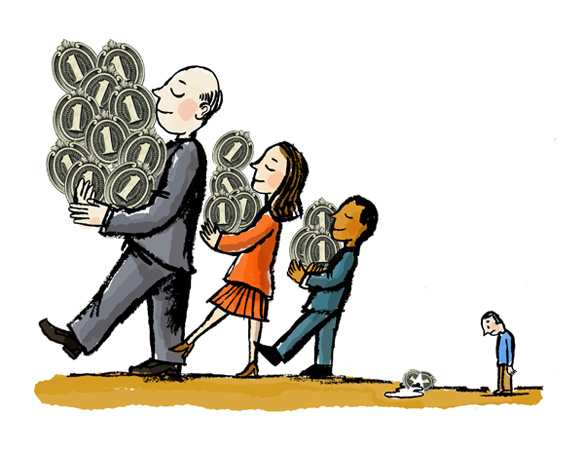 There are few areas of settled concord in economic theory. That the dynamic of power is often determinant in the limited enclaves of consent has been evident in recent times in the growth-versus-distribution debate.

Residual doubts about the tilt of current policy were laid to rest with the Economic Survey for 2014-15. In this assessment of the year gone by and prognoses for the immediate future, the Union Finance Ministry laid out the maxim that “the importance of economic growth, both for lifting up those at the bottom of the income and wealth distribution, and for providing opportunities for everyone in that distribution, cannot be overstated”. The authorities referred to were the Columbia University economist Jagdish Bhagwati and his collaborator Arvind Panagariya, now the head of Niti Aayog, which supplants an ideologically disfavoured Planning Commission.

In a book published in 2013, Bhagwati and Panagariya had stated their essential point upfront in the very title — Why Growth Matters: How Economic Growth in India Reduced Poverty and the Lessons for Other Developing Countries. This book, curiously, came out within a few weeks of another, which put the range of questions addressed in rather different perspective. In An Uncertain Glory: India and its Contradictions, the Nobel laureate economist Amartya Sen, and his long-time collaborator Jean Dreze, made a strong case for a welfare approach that would enhance human capabilities, making the poor participants in growth.

And then began the war of words. “Sen is not simply wrong; he also poses a serious danger to economic policy in India,” wrote Bhagwati. Growth was a precedent condition for distributive justice. And Sen was “with no evidence and with only wishful thinking to support his assertions (claiming that)... redistribution should precede growth”.

Sen maintained a lofty silence for a while, but then responded with an admonition against the misrepresentation of his views. Indeed, a little pause would show that the relationship Bhagwati outlines in strict logical and temporal precedence is not quite how things work. The pattern of growth is determined by income distribution, in a relationship of reciprocal reinforcement. The rural job guarantee scheme, launched in 2005, recognised this reality and sought to create a mass-market by putting purchasing power into the pockets of the poor. It may have succeeded in this quest, though without quite augmenting productive capacity in rural India, creating an inherent risk of inflation.

The fiscal burden was a cause for worry right from the beginning. But for unrelated reasons, a purple patch of growth ensued for the Indian economy since 2004, largely relieving that concern. With unprecedented revenue buoyancy, the government seemed actually emboldened to begin thinking aloud about larger ambitions, such as the rights to food and education.

It all turned sour with the global economic meltdown of 2008. For a while, the Congress-led government held its nerve, boosting its spending on welfare schemes. That may have won the ruling party another term in power in the 2009 general election. But the sense of triumph was transient, as the gains in purchasing power were eroded by rampant inflation.

When Narendra Modi rode the wave of discontent to emerge winner in 2014, there were expectations that he would cut back on welfare and restore a focus on so-called productive sectors. This intent was frontally critiqued by a group of economists who, in turn, drew Bhagwati’s ire. With a clever play on words, Bhagwati termed the “leading economists” to be “mischievous” and adept at “misleading”.

On the eve of the recent Union Budget, Prime Minister Modi showed where his sympathies lay. With heavy-handed irony, he disavowed any intent to cut back on the job guarantee scheme, since he was aware of the inherent political rewards. It was, he said, a monument to the Congress’s failures over 65 years. Though he could not envisage a future in which the youth of the country, driven by aspiration, would be sent out to dig holes in a pretence of employment, he was not about to squander an easy opportunity to gain political capital.

In seeming disregard of the PM’s disdain, Finance Minister Arun Jaitley the next day actually increased allocations for rural jobs. There was pressure on the Centre following its decision to devolve — in accordance with Finance Commission recommendations — a substantial 42 per cent of tax revenues in the divisible pool to the states, against the current 32 per cent. Despite this, said Jaitley, “adequate provision (was) being made for the schemes for the poor and the disadvantaged”.

The minister’s numbers did not quite square with the detailed expenditure breakdown for the year ahead. And that is where the accounting magic lay. While claiming a higher devolution of funds to the states, the Union Budget was still insisting on controlling how these were spent. “The significant sums that will be spent by the states on these programmes will ensure a quantum leap in expenditures in these areas,” said Jaitley, “I urge states to utilise their enhanced resources effectively in these areas.”

Difficulties could arise from states’ own perceptions of the utility of the rural employment programme. Powerful politicians such as Sharad Pawar and Parkash Singh Badal have, in recent times, spoken against the employment guarantee, terming it an inconvenience as it compels higher wage payments for essential agricultural labour. This is representative of a certain viewpoint that remains strong among agrarian elites influential in state politics. To expect an unchanged level of commitment to the rural jobs programme, despite the financial power shifting to the states, may be unrealistic. The growth-versus-distribution debate may soon be decisively settled in favour of the former, though with unpredictable political consequences.

Sukumar Muralidharan is a fellow at the Indian Institute of Advanced Study, Shimla