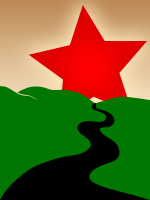 1. The history of capitalism has always been also the history of its crises. This has been so because of its self-contradictory nature, which by itself generates crises and undermines its own conditions of successful functioning. Till now, capitalism has always proved flexible enough to ensure that these crises did not lead to its end, although the price that humans and nature had to pay for its survival has been high. Today however, all over the world, capitalism is facing for the first time an insurmountable barrier, which has been set from "outside", is of geological and physical nature and is, therefore, final. This barrier consists in the limits to growth set by (1) depletion of the non-renewable resources and (2) the declining ecological carrying capacity of the earth, both of which are limited in any case. This is, so to speak, a "pincer-grip crisis," from which there is no escape.

2. The ultimate cause of the current financial, debt and economic crisis is precisely this: In many countries, growth has come to an end. In others, the growth rate is declining. The financial system as a whole rests on the expectation of steady growth. As soon as it becomes apparent that this growth expectation cannot be met, the financial system inevitably begins to falter. The conventional crisis theories (also those of Marxist, Keynesian or Schumpeterian provenance) are no longer sufficient to explain the crisis. Their recipes too are no longer effective. Those who, for example, want to cope with the current debt crisis by means of Keynesian stimulus policies – as an alternative to the prevailing austerity measures – overlook the objective limits to growth, overlook that there is little unexploited growth potential left that could be exploited.

3. In particular with the catchword "green new deal", some people are spreading the illusion that capitalist growth could be continued as before with other technical means. It is being suggested that, through the use of renewable energies and efficiency increasing technologies, "decoupling" of economic growth and resource and energy consumption could be achieved to a sufficiently high degree. This is one of the most dangerous illusions of "eco-capitalism". In all technologies, potential for efficiency increase is limited and subject to the law of diminishing marginal returns. Likewise, the potential of renewable energies is not inexhaustible. The energy density that has until now been available to us with the now dwindling fossil energy sources1, cannot even be approximately achieved with the renewable energy sources. That is, although we indeed have to use some "green technologies", at the final count, significantly less net energy will be available to us than today.

4. Not only global capitalism – which, as we know, is dependent on continuous capital accumulation on an ever higher scale and on a globally functioning strongly differentiated division of labor – but also industrial society as a whole has reached a crisis point! Viewed from the perspective of human history, industrial society is a singularity that cannot be generalized – an exceptional situation of short duration enjoyable only for a minority of humanity. It has only been possible on the basis of massive exploitation of fossil fuels – first coal, then oil and gas. Future sustainable societies will have to manage with a very modest resource base. Mass motorized individual travel, the commonness of long-haul flights, etc. will then no longer be possible. With renewable energies much fewer blast furnaces can be fired, much less cement and aluminum can be produced etc. etc.

5. A major difference between a Marxist understanding of socialism and that of "Initiative Eco-Socialism" is: While Marx and Engels saw the world-historic role of capitalism in the highest possible development of productive forces, on the basis of which alone building a socialist (or communist) society is possible, the "Initiative Eco-Socialism" says: exactly the opposite is the case. A socialist (solidarity-based, egalitarian) society is independent of any particular level of development of productive forces. Indeed, a high level thereof can even be a hindrance to the purpose.

6. In future, the economy will not only not grow any more, but it will inevitably shrink! Politically, we are facing the choice between letting the shrinking process chaotically descend upon us or to control and shape it consciously. In our sense, that would mean to control and shape it in a just way and in the spirit of solidarity. The economy will have to shrink until it has reached a state of stable equilibrium ("steady state").

7. Such a shrinking process cannot however be managed within the framework of capitalist relations. In standard economic terms, as we know, it would be tantamount to a deep depression. That is, there would be large-scale destruction of capital, whole industries would decline, and falling profit rates would prevent private investment. A shrinking economy is in contradiction to the immanent growth imperative of capitalism. That is, the process of gradual dismantling of the industrial structure could only be organized beyond capitalism – and probably defying its expected resistance.

8. Under the condition of scarce and dwindling resources, market mechanisms no longer work effectively. A market economy works effectively – if at all – only on condition that all market participants can react flexibly and adequately to market signals. But dwindling resource availability would entail that, in this area, we would have to do with sellers’ markets. Then there would be serious misallocation of resources. Scarce resources would not then flow to areas of the economy we as society consider to be essential and desirable, but to those where sufficient purchasing power exists. Under scarcity conditions, the market would not be able to ensure a minimum level of social justice. This means that we would need, instead of market mechanisms, conscious planning, quantitative controls, price controls, a quota system etc.

9. In the first phase of transformation of the economy – the shrinking phase – the state must necessarily be a strong player. This is of course not an ideal solution. Ideally, planning should be as decentralized as possible, with maximum participation of the stakeholders, and it should aim at a high degree of self-sufficiency of local communities. That is why bottom-up approaches in the sense of a solidarity-based economy would be of central importance for the transition period.

10. An eco-socialist economy would be characterized by a strong emphasis on the local and the regional, and it would strongly restrict long-distance trade.2 It would be characterized by a much higher use of labor-intensive technologies (today’s high labor productivity is essentially the result of undesirably high resource consumption in capital-intensive technologies)3, a much lower level of division of labor,4 and a high degree of self-sufficiency.

11. In the light of this perspective on the future, what is important now is (a) to develop concrete exit strategies. That is, to see with which political steps a future eco-socialist government could begin the process of dismantling the industrial structure in a spirit of solidarity. (b) In this connection, we have to examine whether some popular "leftist" policy proposals (such as a guaranteed basic income paid out to all without condition) are compatible with an eco-socialist perspective.