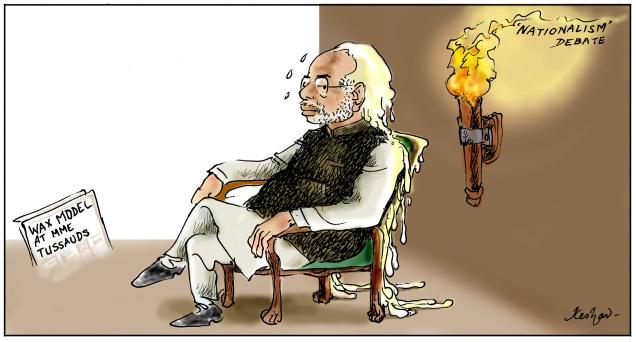 Can An Indian Spring Be Far Behind?

The past winter months in India were grimly overcast, with gathering dark clouds. A deeply divisive manufactured binary sought to pit youthful idealism and dissent against love for the country. In this darkness, light and warmth defiantly cast by both the pain and words of three extraordinary young men marked the arrival of spring.

One of them, tragically, is no longer with us, his ambition to become a science writer like Carl Sagan unrealised. Mourning Rohith Vemula’s death and lost promise, astronomer Sagan’s wife Ann Druyan wrote: “To read his suicide note and to learn the details of his predicament is to get a vivid inkling of the actual cost of bias to our civilisation”. The second, Umar Khalid, is still in prison at the time of writing, charged with sedition, along with several university mates. The third, Kanhaiya Kumar, was released from prison again on charges of sedition, on interim bail by a judge who severely admonished him to “not participate actively or passively in any activity which may be termed as anti-national”.

From these three young men, there are many lessons that people of our country can learn. When those of us whose hair has greyed or fallen begin learning from the young, there is then hope for the future of our country.

We learn from the actions and words of these three young men the imperative of speaking truth to power, of courage of convictions, of equality — social and economic — and justice. But probably the most worthy lesson we learn from them in a country that is today more divided than ever in its independent history is of the paramount value of solidarity.

The immediate battles that all three young people fought that led to their labelling as “anti-national” were battles not connected with their immediate identity, but rather those that reflected their broader solidarity with peoples living with injustice. Rohith agitated against the violent blocking by ABVP students of a film that documented the suffering and injustice endured by Muslim survivors of targeted hate violence in Muzaffarnagar since 2013. Both he and Kanhaiya organised student meetings to debate the justice of the death penalty to two men convicted for terror crimes, Yakub Memon and Afzal Guru, respectively. And Umar’s passion was to study and fight injustice not against Muslims — that some may presume natural because he was born into a Muslim family — but against Adivasis, the most historically deprived peoples of India today. In so doing, they lived the words of Nelson Mandela, “Freedom is indivisible; the chains on any one of my people were the chains on all of them, the chains on all of my people were the chains on me”.

In his first and last letter to the world, Rohith spoke of every human being as “a glorious thing made up of stardust. In every field, in studies, in streets, in politics, and in dying and living.” His solidarity knew no bounds. Karthik Bittu, the first transgender teacher in the University of Hyderabad, recalls that Rohith was the first to reach out to her in precious support and camaraderie, as he tried hard to understand the humiliations and exclusions of the lives of sexual minorities. He worked hardest to prepare for the May Day rally in support of workers’ rights. She wrote that despite his pain, he “still loved the world, the universe… You were pricked by every injustice, and this is what I want people to know.”

Umar’s teacher Sangeeta Dasgupta writes, ‘Umar Khalid, My Student’ (The Indian Express, February 26) affectionately of his passionate engagement with Adivasi history and politics. She recalls that he tried to understand conflicts and struggles of the Adivasis in the past in order to help him understand the injustice of Adivasi societies today. The country’s political and security establishment, as well as mainstream media, saw him only as a Muslim and could not comprehend his wider solidarities. That he was an atheist and communist committed to Adivasi justice was irrelevant to them. He was reduced, as Rohith said, to his “immediate identity”, to the “accident of his birth”. When he was accused of being a Jaish-e-Mohammed terrorist, his family and friends joked sadly that he would first have to be a follower of Mohammed before he could be a follower of the Jaish-e-Mohammed.

The evening Kanhaiya was released from jail, my daughter and I decided to join the JNU students in their victory rally and hear Kanhaiya’s speech. We found a place on the ground quite far from where Kanhaiya spoke. I could not see him much of the time, and the battery mike was often muted. But I was entranced to watch the rapt, shining faces of thousands of the assembled students who hung on to his every word, cheering, laughing, raising resounding slogans to socialism and freedom.

Like the students, I found Kanhaiya’s speech deeply stirring. I enjoyed his polemics against Hindu nationalism, his feisty challenges to the politics and policies of the country’s prime minister and the Sangh. I was moved when he reminded us that a country is not an abstract idea, it is its people, especially its oppressed people; and for them he declared that he sought azadi not from India but in India.

But the most endearing moments of his speech were when he recalled his conversations with his jail guards, who he discovered were “just like me. Think, who takes up a police job inside a jail — someone whose father is either a farmer or a labourer, someone whose father is from a disadvantaged community… I too come from a poor family, a farmer’s family.” The jail guards and he discuss many things — revolution, hunger, corruption. And the Ram temple. A guard agreed that if god is everywhere, it is the height of foolishness to try to create something for god. Kanhaiya railed also against the false binary being erected between soldiers and others. My father is a farmer, my brother a soldier, and I a student in a public university.

Kanhaiya says he does not want to make a career in politics. I wish he would: I cannot think of a single national leader from any party who can match his love for his country, its oppressed people and its Constitution. But I am delighted that he wishes to be a teacher.

He says he longs for normalcy, for the chance to watch the flowers of Delhi’s spring. As I sit in my office and see a tree laden with flaming orange palash flowers, I think of Kanhaiya. I think of solidarity. And I encounter hope.

Mander is a human rights worker and writer.