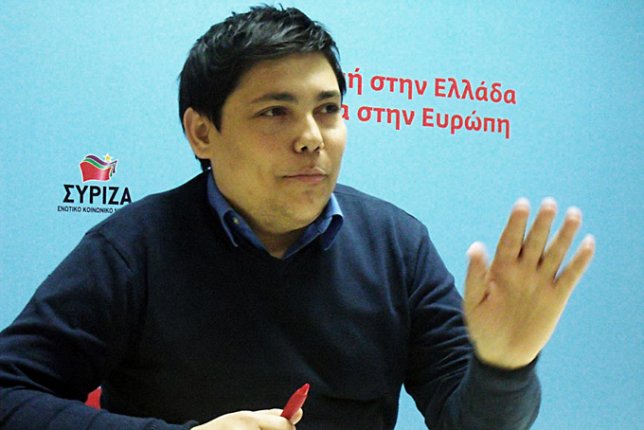 Yiannis Bournous, member of the Political Secretariat of Syriza was invited by Alternatives to its Festival of Solidarity held in Montreal on June 13, 2015. This speech has been transcribed by Jennifer Geleff, contributer to the Alternatives International Journal

Some of you know many aspects of the consequences of the barbaric neoliberal austerity policies that have been imposed on my country. These policies have been imposed by foreign lenders consisting of the European Union Commission, the European Union Central Bank, and the IMF and internally, from the parties that used to rule our country for the last forty decades: the Conservatives and the Social Democrats.

Since 2010 and since the agreement of the first Memorandum of Understanding between the socialist government of Mr. Papandreou and the institutions formally known as Troika, our country has been used as a big experimentation field for the elaboration of the most barbaric neoliberal structural reforms that Europe has seen since the end of World War II. They have used the debt crisis as an excuse in order to impose an offensive elaboration of neoliberal adjustments and policies. In previous years, they have been unable to fully impose these policies because of social resistance; not only in Greece but in many other European countries.

The last five years of the memorandum policy, an extreme austerity policy, has resulted in dramatic economic and social figures. We must first demolish the myth that these policies are applied to over-indebted countries in order to reduce public debt. In 2010 when the first memorandum of austerity was signed for Greece, the public debt was 120% of the GDP. After five years of destructive policy, when our new government took the country into our own hands, the public debt exceeded 175% of the GDP.

Greece has a general unemployment rate of approximately 30%. Amongst the youth, the unemployment rate is 60%. What are the results of this youth unemployment? In the last five years, Greece has been suffering from the biggest brain drain that any European country has seen since WWII. In the last four years, Greece, a country of 11 million inhabitants, has lost 300,000 people. These people have migrated at any cost in order to find any kind of job. Among them are more than 130,000 young specialized scientists who hold Master’s and PhD degrees.

Suicide rates have reached sky high numbers in the years of the memorandums of austerity. Homelessness has become a newly unprecedented trend. In cities we are seeing the phenomenon of people who are working but who are also homeless. Simultaneously, the social consequences of neoliberal austerity have been even harder for marginalized categories including women, workers, employees, youth, and migrants.

The country that we took into our hands after the national elections on January 25th was a devastated country with destroyed social structures and infrastructure, and with collapsing public schools and hospitals. Neoliberal fundamentalists insist that despite the verdict expressed by the Greek people, the new government should follow exactly the same policy. This means, the continuation of the violent internal devaluation of labour and the continuation of cuts to salaries. The minimum wage in the private sector has dropped to 580 euro. This number is even smaller for young workers under the age of 25. A basic pension in Greece is 380 euro. People have worked all of their lives no longer have the ability to survive and often, must depend on their unemployed children.

Since January 25th, the institutions known as Troika finally have somebody at the table of negotiations who says “no”. Aside from the political aspects of this whole process, it is psychologically unbearable to come from a country which has been victimized not only economically but also socially, ethically, and culturally. In order to justify the unprecedented redistribution of wealth from bottom to top that has been happening in the last five years, they have employed an unbelievable smear campaign against the Greek people. The campaign slanders the Greek people as a population that is lazy, not working enough, and living on expensive European taxpayers. Enough is enough.

Through these loan agreements, 92-93% of the money offered to Greece in the last five years went back to German, French, and other foreign banks as repayment to previous loans. In this sense, the private banks profited from loans to Greece because they did not only receive their money back, but also interest.

Now we are in a process of negotiation. Greece continues to repay our obligations until the end of this month. But this cannot continue because we have used up all of the existing resources and means as a state. So now, the dilemma I put on the table is very clear. We refuse to pay the installment on June 1st. We have transferred three installments to June 30th and the IMF has agreed because they are afraid of a Greek default. We stated that if we don’t have an agreement June 30th, we will prefer to pay pensions and salaries, instead of continuing to repay lenders.

Our government has started implementing programs against the attempt to institutionalize neoliberal barbarity.

1. Loan for the Humanitarian Crisis: free electricity, housing allowance, and food coupons to families and households who live under extreme poverty.

2. Loan for the Restructuring of Cities: this constitutes cities that are in debt to the state and social security funds and contributes to two things. First, restart the economy so that small and medium businesses can begin repaying debt and get their business running again. Second, increase state revenue. Through these measures, 200,000 citizens have rearranged their debt with the state. In the first month, this has already brought 150 million euro to the state and it has rearranged a total amount of 4.2 billion euro.

3. The Return of 4,500 Civil Servants: this includes the heroic cleaning ladies of the Ministry of Finance, teachers, professors, doctors, and nurses who were illegally fired by the previous government. These people are already back to their work. I should tell you that in a country with collapsing hospitals, two weeks ago it was the first time since 2009 that we announced that we are hiring doctors and nurses. You cannot begin to imagine the situation in public hospitals. Surgeries are delayed because hospitals are asking patients to bring their own surgery materials from home.

4. The Reopening of the Greek Public Radio Television: the public radio television was reopened on June 11th on the two year commemoration of its illegal closure by the right wing government of Mr. Samaras. With us today, there are many people from the Greek diaspora in the room. For the moment, 2/3 of the national channels are back in operation and very soon we will reinstall broadcasting of ERT satellite which has been so dramatically missed by the Greek diaspora.

5. Granting Citizenship to 2nd Generation Immigrants: this concerns about 200,000 children who have been born or raised in Greece and who have enjoyed Greek education. So, it their lawful right to have Greek citizenship. They are paying taxes, they contribute to the national economy, and they are part of our culture.

6. Special Alternate Minister Against Corruption: it is the first time in Greece that there is a special Alternate Minister against Corruption. This is very important for foreign journalists to know because they seem to be forgetting it. All the lists of big tax evaders have been opened and are under investigation. In the first two months of the investigation, 5,000 names of big tax evaders who have illegally transferred their money abroad or still owe money to the state have been taken to justice. After the end of the investigation, the total number of names is calculated to be 24,000. The list consists of oligarch families who traditionally, have supported the social democrats and right wing government through the past four decades.

7. Multidimensional Foreign Policy: there is a new concept of multidimensional foreign policy. Greece respects each obligation as a member state of the European Union. But at the same time, we are making use of the powerful geopolitical and geostrategic position of our country. We have started a debate with Russie. We have started a debate with China. We are here to play a peaceful role as a mediator for the resolution of four open conflicts in our region including the Middle Eastern conflict and the conflict in the Ukraine.

8. President of Parliament: it is the first time that the Greek parliament has a left women as its president. Three committees have already been instituted: First, a committee to audit the debt; to see where it came from, which part of it is illegal, and which part of it is unethical. Second, a committee for the investigation of the conditions that submitted our country to the memorandum of austerity. People must see solid proof that justice, transparency, and democracy are returning to this country. Ex-ministers and even ex-prime ministers must explain to people under which conditions the IMF made its first entrance to the eurozone member states. Third, the committee for the German war reparations to Greece. This is sensitive issue and we do not wish to show that the Greek people are turning against the German people. That is not the character of the crisis. This is not a controversy between countries. The crisis is a class controversy between the interests of the capitalists and the interests of the workers of Europe.

It is the first Greek government that dares to bring this historical and ethical issue into the foreground of the discussion. I want to thank our comrades from the German left, not only for their support for this demand but in general, for their overall stance in the German parliament. They are the only political force in Germany that since the beginning of the crisis, has dared to speak up and say that it is not a fault of the Greek people.

9. Restoration of Minimum Wage in the Private Sector: we wish to make gradual reinstallments until summer 2016 and restore the minimum wage in the private sector from 580 to 741 euro. This will restore the wage to what it was before the first memorandum. We believe that we will be victorious in this demand.

I should remind you of the political fate of the Greek Socialist Party. It was once a party of 48% of the votes. In the polls today, they have 3.5%. This is because they gave the wrong answer over the last two decades. They chose the neoliberal camp and neoliberal theory and practice as an answer to the global crisis. So, in the face of this harsh and historical polarization, we have a window of hope that opened with the Greek elections in 2012. This window of hope became even bigger with the Greek elections in 2015. It opened widely with the victory of the Spaniards in the local elections of Madrid and Barcelona. It became even bigger in Turkey, a non-EU country, where the Peoples’ Democratic Party managed to be the first left party in Turkish history. Two weeks ago, the party took 13% and became the fourth force in the Turkish National Assembly.

Regardless of our country, we must keep this window open as a historical opportunity. This is not a revenge but a chance to change the fate of our peoples. This struggle is not only a struggle for Greece. It is a struggle for the future of European people and it is a struggle that will determine the fate of global neoliberal forces for the next period. For this reason, we are determined to succeed.