Home > English > Alternatives International Journal > 2015 > December 2015 > Which Side Will Prevail? 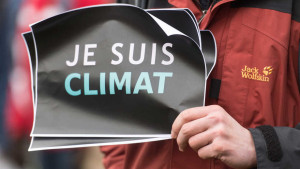 Which Side Will Prevail?

In this chilly evening of November the 27th, a few hundred people are on the Place de la République. Many are meditating, praying, or just silent around the big statue of the Republic in the middle of the square, surrounded with candles, messages of peace, children’s drawing, flags of different countries, and banners. An Arab is selling French flags. International TV channels have parked their vans nearby.

After the massacre, people look for ways to express sympathy for the victims, who were mostly young, under 35 years old, as well as ethnically and nationally diverse: 23 nationalities represented, all kinds of people from middle-class hedonists to practicing believers of Islam: the typical gathering on Friday night in the XIth district of Paris.

Parisians made a point of returning to the terraces of cafes where the shootings took place, to concerts, theatres, cinemas, and football matches. A strong feeling of the need to stand together, to avoid division, was expressed all over the nation. Gatherings took place in several big cities, with significant participation by all kinds of people, including Muslim minorities. In Bordeaux, the mayor of the town and potential conservative candidate Alain Juppé marched with the local imam, rabbi, and bishop, as well as representatives of political parties and human rights NGOs. The media didn’t talk too much of such events, since in the name of the state of emergency most demonstrations were forbidden by the authorities, and none allowed in Paris.

After the attack the authorities have proclaimed a state of emergency. The parliament has tightened the emergency law of 1955 (a law promulgated during the bloody Algerian war at the time of French colonialism). Only a handful of MPs (some of the Greens and leftists) did not vote for the decree that allows putting under arrest people whose “behavior” could threaten public order.

A first victory for the terrorists?

Of course the police are looking for the fleeing terrorists. Of course all means should be implemented to arrest the murderers and prevent new attacks. And of course we should fight the causes in Europe, in the Middle East, and in Africa that move people to adopt the sectarian, jihadist ideology of movements like ISIL.

A few days after November 13th, the police arrested or killed the surviving members of the bloody attacks during a very violent assault in a house in a poor neighborhood in Saint Denis, near Paris, a few hundred meters from the basilica where the kings of France are buried. The 71 inhabitants living there have not yet been relocated, and sleep in a sports hall. The State of Emergency policy does not have time to care about such collateral victims.

But who is really targeted in the name of the state of emergency?

As Le Monde observed and as the Human Right League denounced, the state of emergency is being used to harass ecological activists and to block demonstrations denouncing the irresponsibility of governments facing climate change and expressing the demands of civil societies during the COP21 meeting. Even an organic farm was raided by the gendarmes, perhaps looking for bombs in the cabbages, and placards denouncing environment policies were seized as “terrorist” materials.

It must be underlined that French leaders are not all on the same page. Some think that expressions of civil society should not be banned during the COP21. But among hardliners is the Prime Minister Manuel Valls, who clearly targeted ecological activists, even before the attacks, as “troublemakers” and now has the occasion to repress them.

In addition to the “ecowarrior danger,” the events of November 13th are being used to whip up fear of “foreigners,” especially the “migrants” who are refugees from Middle East and African hells. The “invasion” must be stopped! Or as Mark Rutte, the Dutch Prime Minister warned, Europe will suffer the same fate as the collapsing Roman Empire. The “barbarian danger” justifies the necessity of control at the borders, a purely rhetorical gesture given that internal European borders cannot be closed, unless you build a wall. The Prime Minister also threatens to withdraw French nationality from “delinquents” who have a double nationality, thus creating a climate of insecurity for maybe two million French citizens.

All this rhetoric of war, and nationalist and xenophobic statements, will not stop terrorism. In a way this is a first victory for the ISIL murderers themselves because this was explicitly one of the goals of their attacks: to create a climate of fear and hysterical reactions, and promote fractures within Europe by putting Muslims minorities under pressure and developing insecurities for migrants, as well as recruiting new members.

On the one hand, we have the very positive attitude of most French people, not falling into the fear trap, staying together, and opposing anti-liberty measures. On the other hand, several organizations and a large sector of the political elite are reacting with fear, adopting the demands of the extreme right to target foreigners, migrants, and all kind of “interior enemies,” including ecological activists. The polls indicate a rise in support of the xenophobic and racist National Front in the coming regional elections, while a sector of the right-wing conservative parties and left-wing Socialist Party have already de facto adopted National Front positions. Which side will prevail is the question for France, for Europe, in the coming months.

This evening (November 27th) I leave the Place de la République to go to a meeting in a little room, not far from the Bataclan, the music hall where the biggest massacre took place. Here I talk to Louai Abo Al Joud and Youssef Sedik, two courageous members of the Aleppo Media Centre, in northern Syria, who are fighting both the Assad regime and ISIL. They’re opposed to fighting ISIL via US and French airstrikes and Russian bombing. But that’s another story. For now, we prepare for the COP21 in Paris and, despite all difficulties, we will organize our civil society initiatives!

Bernard Dreano, a civic activist since the 1960s, is active in the “alterglobalist” movement, member of the international council of the World Social Forum. He is president of the Paris-based Center of International Solidarity Studies and Initiatives (CEDETIM) and founding member of the Assemblée Européenne des Citoyens (Helsinki Citizen’s Assembly – France). He is the author or editor of several books (in French), recently The Pearl and the Colonel, Reflection on the Arab Revolutions (Non Lieu, Paris 2011), and Human (In)security, the Struggles for Peace in the XXIst Century (Non Lieu 2015).