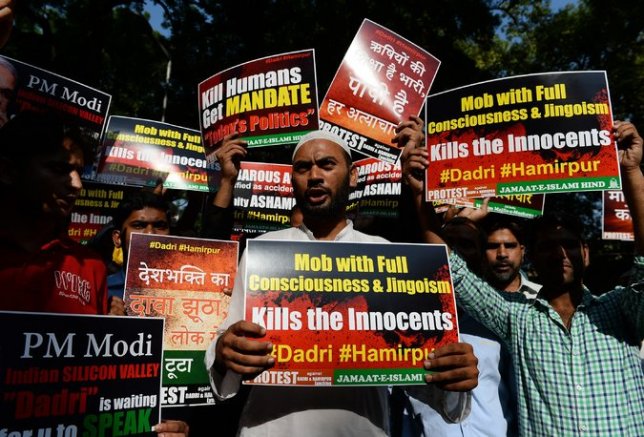 Intellectuals, writers, and artists have banded together in response to aggressive and violent political tactics that have been employed since the landslide election of Prime Minister Narendra Modi last year. During his election campaign, Modi made promises that he would be prime minister for all of India and guaranteed protection for minorities, however, this promise has carried little weight during his administration. Two hundred writers, as well as prominent Bollywood figures have actively criticized the growing intolerance in India and have urged others to express solidarity for the protection of freedom of expression and religion.

Salman Rushdie, the writer of the extremely controversial novel The Satanic Verses, has supported writers who have returned their Sahitya Akademi awards in protest against the rising culture of fear and censorship under the Modi administration. The Indian intelligentsia has remarked on the general silence from both Akademi and from the Modi government following a series of murders of both secular activists and Muslims. The murder of MM Kalburgi rocked the Indian literary world. He was a renowned Kannada writer, Sahitya Akademi award winner, research scholar, and rationalist who was shot dead at point blank range in his home. Though the police have not issued an official statement, initial reports have suggested that he was murdered by right-wing activists due to his views on idol worship and Hindu rituals.

In September, a 50-year-old Muslim man was killed in a mob lynching in Uttar Pradesh. The lynching of this Muslim laborer was a horrific response by Hindu extremists to rumors that his family had been consuming beef at home. The deaths of MM Kalburgi, the Muslim laborer, as well as rationalists Govind Pansare and Narendra Dabholkar, have demonstrated the intolerance of Hindu extremists towards anyone perceived as dissenting from Hindu beliefs. The novelist Arundhati Roy, author of the Booker prize-winning novel called The God of Small Things, has joined in protest by returning her top Indian national award in protest against violence encouraged and perpetrated by right-wing groups. Roy expressed her horror and shame in an editorial in the Indian Express that minorities in India are being forced to live in a constant state of terror. The protests of significant cultural figures in India has articulated the mounting fears of millions of Indians and has put the Modi government under a spotlight of criticism for its lack of response to the growing violence.

Many intellectuals have argued that the inaction of the government has encouraged Hindu extremists to justify violence and assert Hindu superiority. Rushdie has expressed concerns that the BJP is fostering a ‘new doctrinaire Hinduism’. Statements have been made by Modi supporters that the reaction and criticism of the Modi government by the intelligentsia is an attempt to slander the Modi government, rather than focusing on achieving unity, progress, and growth under Modi’s leadership. Yet it seems that the cause of unity comes at the price of lives of anyone who does not fit into a strictly Hindu form of national unity. In this way, the distinction between national unity and communalism has become blurred. Rushdie has made comments about the difference between race and religion, stating that, “the colour of skin is a fact. Religious belief is an opinion”. The current reality in India, however, is that this distinction is not quite so clear. The complex relationship between ethnicity and religion in India has contributed to a rise of nationalism in which religion and ethnicity are markers for what defines a “true” Indian citizen. Religious belief should not be branded as communal, however, the collective assertion of religious identity in India can be taken as an important indicator of communalism.

In the case of concerns for the rising ‘doctrinaire Hinduism’ employed by the BJP, the potential for communalism is bolstered by the huge Hindu majority, as well as consideration for the electoral system. The “Modi toadies”—a mocking term for Modi’s supporters coined by Rushdie—have claimed that the “failure in the elections is sought to be avenged by other means”. This failure in the elections may potentially be attributed to the fact that in areas where the representatives of the majority community have electoral dominance there is little electoral incentive to moderate communal appeals from their own community, suppress anti-minority polarization, or order the administration to take firm action to prevent communal violence.

In the wake of criticism, Modi toadies have questioned how the central government could be held responsible for the lynching of the Muslim laborer in Uttar Pradesh by referring to the history of communal violence in the region. Yet the history of violence is the area has largely been encouraged by members of the BJP. The BJP played an active role in encouraging communal violence in the 1990s when they called for the destruction of the Babri Masjid, a mosque in Uttar Pradesh. Though the violence that ensued in the 1990s temporarily disbanded state governments led by members of the BJP, the extremely right-wing party has steadily risen to power in India, as evidenced by Modi’s landslide election. Thus the government’s unwillingness to condemn the growing intolerance and violence is unsurprising, since the support for the Prime minister is largely grounded in the BJP’s Hindu majority. Modi gained political traction through the militant Hindu organization, the Rashtriya Swayamsevak Sangh (RSS). Both the BJP and the RSS have a violent and antagonistic history with regard to the treatment of religious minorities and its skewed perception of Indian nationalism. Despite the fact that India constitutionally has no official state religion, the BJP has been known for employing nationalist rhetoric that defines Indian nationalism in terms of Hinduism and by positioning the Hindu identity against the ‘foreign’ Muslim other.

In this way, despite the fact that Modi supporters have criticized the intelligentsia for using cultural means to criticize the government, the involvement of culturally important figures has drawn considerable attention to the growing state of censorship and violence under Modi’s administration. The unwillingness of the government to condemn the violence perpetrated by Hindu extremists is an indirect way of condoning it. Just as the police stood passively by in the 1990s in Uttar Pradesh while Hindus slaughtered Muslims, the government now stands passively by as its citizens live in a state of fear. Modi is held to the promise he made to protect minorities. He cannot hide behind the argument of ‘unity’ when blood is shed in its name. The literary figures have given a voice of protest to the secularists and minorities whose government has remained silent, in order to let those who live in fear know that they are not alone.