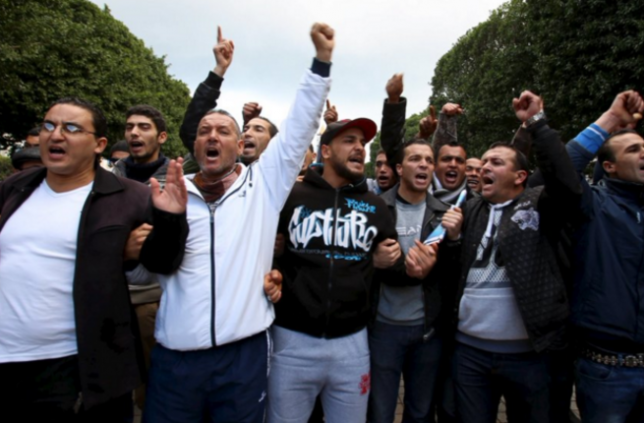 When History Repeats Itself

There is no big difference between what happened in Sidi Bouzid, December 17th, 2010 when the street vendor Mohamed Bouazizi self-immolated after being harassed by some officials, inspiring wide protests all over Tunisia, mainly in deprived area and, what happened this January 2016 in Kasserine, five years after the Tunisian revolution, “the revolution of dignity”. Protests were set off when an unemployed youth, Ridha Yahioui, deliberately climbed an electric pole and died electrocuted while taking part in a protest staged by a group of unemployed. And once again, social protests have been triggered, mainly by unemployed university undergraduates. And with the same slogans: employment, freedom and dignity.

What has changed in the last five years? Two years ago, the work of the Constituent Assembly ended with the adoption of a constitution that contains important human rights guarantees, stipulating, among other things, that "the State shall strive to achieve social justice, sustainable development and balance between different regions."

However, nothing much has changed on the ground. The social grievances that inspired the Tunisian revolution remain unsolved. Worse still, the gulf between the regions has widened, the unemployment problem has been aggravated, mainly among university graduates, who make up a third of the whole unemployed population (242,000 out of 620,000), with 60,000 new graduates every university year. One specific characteristic, though: most of those who are unemployed come from the underprivileged areas of Beja, Jendouba, Kasserine, Sidi Bouzid , gabes, Mednine, Tataouine , Gafsa and Kebili.

In fact, during the last decades, higher education, “Tunisia’s pride” has suffered serious deficiencies: a decline in quality, lack of any strategic vision and absence of job opportunities after graduation. For instance, jobs created in the last few years have not absorbed more than 9% of the graduates, and most of them are working in small businesses along the coastal line, having a capacity of employment of no more than 120 workers.

Not only have successive governments fallen short in addressing unemployment, trying to put out the fire of social protests here and there like firefighters; without a long-term strategy, creating sometimes temporary low-waged jobs without any security or legal framework and without any significant productivity, but they have also continued with the same political orientations in line with the neoliberal policies of Ben Ali, ignoring the impact of such policies on poor and middle-classes and the constitutional social benefits enshrined in the new constitutions.

In fact, what really enrages these young protesters is the widening gap between the social urgencies of the revolution reflected later in the new constitution and the market-driven approach which has never been modified for decades, an approach that is based on unfettered liberalism, marginalization of inland regions, widespread corruption and patronage and cronyism whether in the public or private sector.

It is for these reasons that protests by unemployed youth were triggered in Kasserine and other deprived areas, repeating the same slogans chanted at the time of the revolution: as nothing has changed, these youths have nothing but continue to protest. Adding insult to injury, the political situation is getting worse as leaders in the majority party are more engaged in a turf war about their personal ambitions than in trying to solve the acute social and economic problems, tarnishing not only their own image and that of their party, but also that of the State whose credibility and legitimate prestige are fading away and amplifying the feelings of despair and frustration.

Five years after a revolution with a social background, we, once again, insist on the need to take concrete measures that take into consideration equities between different regions, address the rising demand of employment, limit the growing corruption and rethink the role of the State as a regulator in development, supervision and planning. Without this, protests will break out again, and they will probably grow more and more violent.

Tunisia, we think, is now at the crossroads: carry on down with the path of democracy, freedoms and human rights, the ideals for which so many people of different backgrounds laid down their lives and if so, we need to enhance a national dialogue on the economic and social situation with the participation of all actors: experts, political parties, civil society organizations, unions… so as to shape a long-term strategy or, carry on ignoring the urgent demands of poor populations with all the ensuing consequences , not the least of which putting the whole transitional process and the democratic assets in jeopardy.