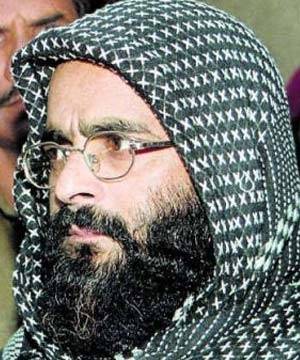 Afzal Guru, convicted of conspiracy to wage war against India and murder in December 2001, was hanged on February 9, 2013, has reemerged as a martyr. The Democratic Students Union (DSU) had decided to hold a cultural meeting inside the campus of Jawaharlal Nehru University (JNU) to protest against what they called “the judicial killing of Afzal Guru and Maqbool Bhat” and in solidarity with “the struggle of Kashmiri people for their democratic right to self-determination.” The University having given permission for the event earlier, decided to withdraw it about 20 minutes before the meeting was to be held. This was done apparently, under pressure of the ABVP, the students’ body of the BJP.

What happened next is well known. The police arrested the JNUSU president, Kanhaiya Kumar on charges of “sedition”. Several others have also been taken into custody and the police are still looking for more students. The prompt police action against ‘anti-national’ students and its deliberate inaction in the case of assault on JNU students, teachers and journalists inside the Patiala House court and the statements by the Home Minister and other members of the government and ruling party alleging links between JNU students and Pakistani Jihadi organisations, clearly shows that the government believes that the students of the JNU were indulging in activities aimed at destroying the integrity and sovereignty of the country. Clearly, in this atmosphere of heightened indignation of the self-righteous nationalists, some of whom have said they would not hesitate to kill people who raised anti-national slogans, the JNU students have little chance of escaping being sacrificed at the altar of nationalism.

Let me move away from what is happening and the debate about whether the JNU students should be charged with sedition. Let me get back to the issue of the protest against the execution of Afzal Guru. More critically why is the execution of Afzal Guru still seen as unjust by so many people of this country, and not just only Kashmiris. The slogan, "Tum kitne Afzal maaroge, har ghar se Afzal niklega!" (How many Afzals can you kill, Afzal will be born in every home) is significant as it shows that in the eyes of several people Afzal become a martyr.

Afzal was convicted by the highest court of the land. His mercy petition filed by his wife, Tabassum was rejected by the President of India. The information about the rejection of the clemency petition was not communicated to Tabassum in time, denying Afzal the opportunity to appeal for a review of his case, a right granted to convicted persons by the judiciary of India. The government executed Afzal without informing his family and his lawyers. The clandestine execution of Afzal violating all procedures and even the law as laid down by the Supreme Court of the land has been seen by many as desperate attempts of ruling parties like the Congress and the BJP to pander to the frenzy of jingoism and appeal for votes.

Afzal was too poor to be able to afford a lawyer, and had asked for legal aid from the state and the court. The Supreme Court has held in 1956 that the every accused has an inalienable right to be defended by a lawyer of his choice, and such representation and defence must be ‘effective’ (Hansraj and Ors vs State, AIR, 1956, p. 641). Afzal never got a lawyer of his choice. The court appointed lawyers, Seema Gulati and then Niraj Bansal.

At the very beginning of the trail, Seema Gulati conceded that the prosecution had prima facie evidence to frame charges. She admitted all the crucial documents and recovered items presented by the prosecution without demanding any formal proof. Later, all these were used as the basis for Afzal’s conviction. After Gulati’s departure midway through the trial, the court appointed Niraj Bansal, Gulati’s junior as Afzal’s lawyer. Afzal’s repeated plea to the court that he did not have confidence in Bansal were ignored. It is evident that Niraj Bansal made virtually no efforts to oppose the prosecution’s case either on question of facts and law. The importance of the right to effective counsel was underlined by the Supreme Court when it said “judicial justice with procedural intricacies, legal submissions and critical examination of evidence leans upon professional expertise; and a failure of equal justice under the law is on the cards where such supportive skill is absent for one side”(Madhav Hayawadanrao Hoskot vs State of Maharashtra, AIR 1978, SC 1548, para 3). The manner in which the court appointed lawyers had defended Afzal, leaves little doubt it was a case of failure of equal justice. As Afzal had said, “I am Afzal for Kashmiris, and I am Afzal for Indians as well, but the two groups have an entirely conflicting perception of my being”. He was a Kashmiri Muslim in Delhi, liable at any point of time to be confronted, attacked, tortured and imprisoned.

Death penalty has little to do with guilt or deterrence. Prosecution of conspiracy cases which involve allegations of attempts to overthrow the government by waging war against the state is essentially a political trial. Justice in such political trials is not always guided by criminal procedure or substantive law, it is often influenced by majoritarian political considerations dressed in the garb of “democratic values”. The Supreme Court of India while ruling in Afzal Guru’s case confirmed this when it decided that a life had to be sacrificed to satisfy the “collective conscience of the people”. After the terrorist attack on the Indian parliament the nation needed a sacrifice for safeguarding itself against its enemies, particularly after the Operation Parakram, India’s first attempt at using military coercion against Pakistan, achieved only limited success. Afzal Guru embodied the perfect enemy. And the media, the military, the intelligence establishment and the politicians – all were agreed. He was a Kashmiri Muslim, a self-confessed failed militant, who had refused to become an informer for the security agencies. A lonely figure who was trying to make a living out of small business and feed his family – a virtual nobody. The court dispensed with its own rules and convicted him on the basis of circumstantial evidence.

In anthropological theory, “sacrifice”, is ritualized violence concerned with marking and safeguarding social boundaries. The sacrifice is also of course a scapegoat. It is the ideal cultural spectacle for the disposal of bodies which threatens the edifice of the community itself. In modern times the community has been substituted by the “nation state”. As if in recognition of the importance of rites of sacrifice, the Supreme Court in 2006 had declared that Afzal Guru was to be executed on the day of the Hindu festival of Diwali, when the Hindus in north India celebrate the triumph of Ram over Ravana by burning his effigies. Annoyed by the appeals that were filed against the execution order and its stay, Swapan Dasgupta, an ideologue of the Hindu nationalists, wrote, “this is the time of the year when India celebrates the triumph of good over evil … … it is ironic that this should be the time when the country was confronted with disagreeable demand aimed at puncturing our sense of Dharma”. Execution of the evil is necessary to uphold Dharma. Already a line has been drawn between the people who are for upholding the Dharma and those who are against the Dharma. The death penalty has become the quintessential expression of the power of the nation and destruction of its enemy. In this scheme of things, the judicial system and the media have taken on the role of identifying the terrorists, who threaten the sovereignty and integrity of India.

The Indian state sees the movement in Kashmir as Pakistan’s proxy war. It refuses to accept that there is popular support for the movement for self-determination in Kashmir. Yet it has tied down nearly half a million members of its armed forces in crushing the movement in the valley for more than two and a half decades. All popular struggles for freedom have a deep moral core. In these movements there is a strong tradition of self-sacrifice for the cause of freedom. Through his execution, Afzal Guru, the failed freedom fighter has returned as a martyr. We are witnessing the unfolding of story of his martyrdom. It is the martyrdom of Afzal that has given birth to the slogan, "Tum kitne Afzal maaroge, har ghar se Afzal niklega!" (How many Afzals can you kill, Afzal will be born in every home).