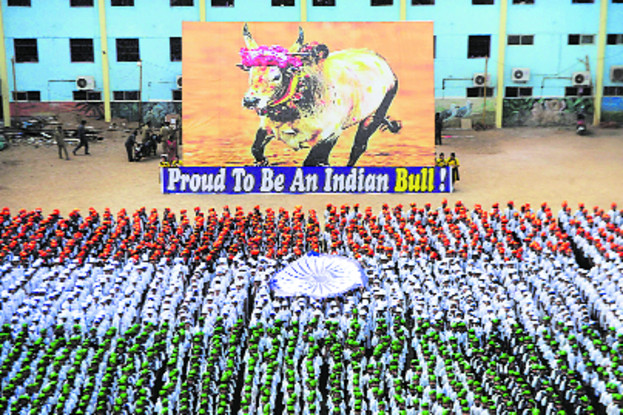 “The Only Problem is the People…”

If the Tamils were ever to threaten secession, they would have nowhere to go but the Ocean, and even if they were to swim across, the Sri Lankans won’t have them!

What’s a little bull between man and sport, especially if it’s presented as a marker of identity and film stars say so? People of Kashmir please note what the people of Tamil Nadu have done. They have protested on a beach in balmy weather, got the attention of Centre and state, got a Supreme Court order effectively nullified and the media is calling it a spontaneous movement. Even their police force has committed arson in the spirit of things but no one is calling them traitors who deserve to be shot with pellet guns and put under house arrest.

It helps that if the Tamils were ever to threaten secession (as they once did in their history) they would have nowhere to go but the Ocean and even if they were to swim across the seas, now even the Sri Lankans won’t have them!

Besides, they were smart in not agitating about livelihood, land or complicated issues such as the dislocation of people for the Kudankulam nuclear plant that’s hardly generating electricity worth the human cost. They knew better, so went with bulls.

As for the people of Kashmir who may wonder about double standards, please note that anti-nationals are anti nationals, traitors are traitors and Pakistanis are Pakistanis. So we have our pellet guns and tanks ready. Thankfully, the Valley is frozen now so the people are relatively quiet (although our soldiers must be suffering more in the cold and some of them have unfortunately taken to complaining publicly these days).

Briefly, the people of Kashmir must understand this simple maxim: Cows are holy, bulls are sport, buffaloes give milk and human beings don’t count. They may count if they were patriots but if they protest too much, they stop being patriots unless the protest has something to do with quotas, culture and identity involving animals. As reasonable people, we are okay with bullfights, but not fights against the nation-state.

There are some patriotic communities who have misbehaved in recent years, but they have a licence to commit arson. This includes the Patels of Gujarat, some of whom may be misguided but can never be traitors because that state only produces true nationalists. Hence if the supporters of Hardik Patel went around burning vehicles and disrupting life, it was only after authorities had given them permission to have protests. So what if things went a little out of hand. Ditto for the Jats of Haryana who may have blocked roads and water supply to the national capital but we are indulgent towards such people, who just have to let off steam every now and then. Now those stone-throwing children of Kashmir are an altogether different matter. They have no business fighting us with such lethal weapons. And we have no space in our hearts to ask what we could have done wrong to make children so fierce that they are ready to die or kill. Never mind that they were peaceful before, but now that they are not peaceful, it’s because they are like that only while we are a great nation that can do no wrong. It’s impossible we made mistakes such as rigged elections, manipulated regimes and overuse of armed forces in Kashmir. Why, people forget that we also shot such lovely Hindi film songs in the Valley. We love the Valley. It belongs to us. The only problem is the people…

Of course, we are a secular nation that gives equal rights to all religions, but we know what some people are like (we suspect in our hearts that it’s because Kashmiris are Muslims and we know what Muslims are like). So if five of them protest, they are more dangerous than thousands gathered on a beach. We are quite clear about who deserve to be hit by pellets. It’s not as if we have no fresh ideas for Kashmir. Now that US President Donald Trump has begun to build a wall with Mexico, the real inside scoop is that when he spoke to our Dear Leader on the phone, he advised him to build a wall with Pakistan too on the border with J&K. That’s the secret plan the Indian government is working on, so people in Kashmir should not believe that Delhi doesn’t care and is clueless. We just have different strokes for different folks.

Maybe, the protestors in Kashmir too need a fresh approach to protests. They can’t make it about Azadi as that won’t happen and we will have no choice but to repeat 2016. So I’m just throwing some ideas into the hat: something about a ritual involving mountain goats or the snow leopard and the fact that it may be extinct and a protest on why it is so. Or, how about the musk deer, also in the endangered list? Better to stay off cows, bulls and buffaloes as that generates a lot of crap and there’s loads of that in the way we handle Kashmir anyway.