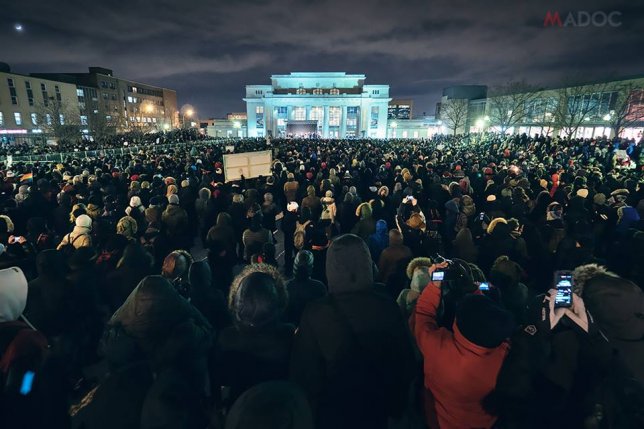 The Dangers Of White Supremacy And Xenophobia

Before shutting down my computer after a long Sunday, I read the news. News I did not imagine I would ever read, although, looking back, it was months and years in the making and clear signs were there, yet we, individuals and society tend to deny dangers till we become its victim or see blood flowing in our backyard.

Despite the hate graffiti on the walls of mosques and of Muslim schools in Quebec for years. Despite the insults hurled against Muslims on the streets of Canadian cities and the pulling of hijabs of the heads of Muslim girls, all which started decades ago. Despite Hérouxville and Pauline Marois’ charter. Despite all this I never seriously considered the possibility of a murderous attack against Muslims in Canada or Quebec. In the United States, maybe, but not here. Now it is here.

I did not pray at a mosque last night, but I easily could have. I am not Quebec City, but a sick minded xenophobe from Montreal could have attacked a mosque here. So close is it now and so blind I was. We were!

For years, Canadian security forces have been busy entrapping Muslim youth, following faint tracks and turning them into full-fledged criminal cases to please their political masters, over the ten dark Harper years, that they did not pay attention to protecting the real vulnerable segment of society.

That segment of society that was demonized for decades and negatively portrayed by the media and by politicians. Politicians some of whom sometimes paid lip service and talked about equality, human rights and protection of minorities, but it feels now that it was all only to save face.

And now, we see the result. It is not only he who pulled the trigger who is to blame. It is not only those around him (or her) who may have heard or read something alarming and did not react, who are to blame. More, most, of the blame falls on the media and the politicians who are followed by thousands, and sometimes millions, who used their popularity and following to fuel the flames of fear, hatred and anger to make political gains or further their career, or both.

Then came Trump and took the whole matter to new heights, or should I say lows, and it caught fire. Unfortunately the fire started in Quebec City.

It is time for them all, from Trump up (because you can hardly go lower), to look themselves in the mirror and see the consequences of their words. It is also time for other politicians and journalists who believe in liberties, rights and equality to be more vocal and take stronger positions leaving behind the urge they frequently portray to "balance" between security and rights. We are beyond this stage now. The danger is real and innocent blood was spilled on your watch.

It is still the day after, when energy and emotions are high, so voices of reason and condemnation are loud and calls to action are easy to speak. My fear is that next month, or maybe even next week, we will hear again that the danger is true and that the fear is justified and another killer will start to plan his or her attack.

Don’t let it happen. We should not let it happen. It is a responsibility upon us all but the burden on each of us is proportional to the visibility they enjoy and the power they wield.

May those who were murdered without justification rest in peace and our hearts go to their families and loved ones, especially children who lost their dads. The best way to honor those memories is to assert, sincerely: "Never Again!"