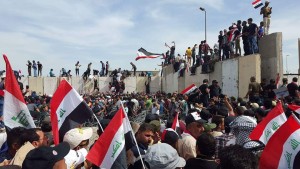 The Iraqi Intifada, a Weekend of Popular Nonviolent Uprising

On the 1st of May 2016, Baghdad looked much safer, without separation walls between the government and the Iraqi people. Those concrete walls built to protect politicians in the Green Zone, to allow them to shut eyes and ears to the legitimate requests of the people, have been torn down by nonviolent activists with their naked hands, while police watched. No explosives were involved, no weapon has been used. People were offering watermelon to the police while waiting to break into the Green Zone, and members of the army took activists inside on their jeeps.

On the 30th of April, after the long and tormented political struggle to end sectarianism in the political system came to a stalemate, people decided to access the Green Zone and thousands entered the Parliament building, but they let parliamentarians of all fronts escape without attacking them. Afterwards people took a rest on the green fields of the International Zone (how it is still called, as a signal of how little has improved in the Iraqi democracy since the American occupation), some played football there, and decided what would be their next move.

In the evening they left the Parliament building and occupied the Grand Festivities Square inside the Green Zone, which has been closed for 13 years since Saddam was making his speeches from there, and authorities feared that people would not use peacefully that public space. Instead, tens of thousands gathered there without clashes. People chanted slogans against the government, but also against interference of Iran in Iraqi politics, and against the Iranian general Qasem Soleimani.

In the morning of the International Workers’ Day, people gathered again at the Grand Festivities Square, which will be the base for demonstrations in the coming days, and activities of all sorts were organized. Workers’ unions brought their banners to celebrate the day, technicians reactivated the audio system of the square, young people re-opened the big fountain and were swimming in its waters. Security forces lifted the state of emergency in Baghdad, since the demonstrations proved not to cause incidents, while Iran suspended all flights between the country and Baghdad as a protest, while maintaining flights to Najaf.

During the day about 70 Members of Parliament left Baghdad to return to their cities, and the three Iraqi Presidents (Abadi, Masum and Jabori) met to discuss the fact, but they made no progress and simply agreed that demonstrations need to be stopped. They also tried to depict the demonstrators as violent, and media published pictures of several politicians looking at the same sofa soiled after people broke into their building. Activists responded with a campaign on social media, satirizing the episode and taking pictures of themselves in front of their dirty sofas, certainly a huge problem in Iraq today.

In the evening of the 1st of May, the Coordination Committee of the Protests (made of secular and Sadrist civil activists) read a statement from the podium of the Square, announcing the following political plan:

1. The demonstrators would withdrawal from the Green Zone in an organized manner, in order to give more time to politicians to apply reforms; 2. As a first phase, the Iraqi parliament will have to vote on the government cabin of technocrats and approve it as soon as possible; 3. In case of failure to achieve this goal, protestors will move to the second phase demanding the three presidencies to resign; 4. If they refuse to resign, the third phase will follow: either Iraq goes to early elections or the protest will move to the headquarters of the three presidencies to prevent them from working, calling for general civil disobedience or a general strike.

While Daesh (IS) keeps targeting civilians with suicide bombers and car bombs, like those which killed at least 14 people today in and around Baghdad, as revenge for the killing of their leaders and for the liberation of areas previously under their control, the Iraqi people fight against the underlying problems of Iraqi politics and society through nonviolent means. International media should pay more attention to such positive dynamics, which need to be fully understood and strongly supported.