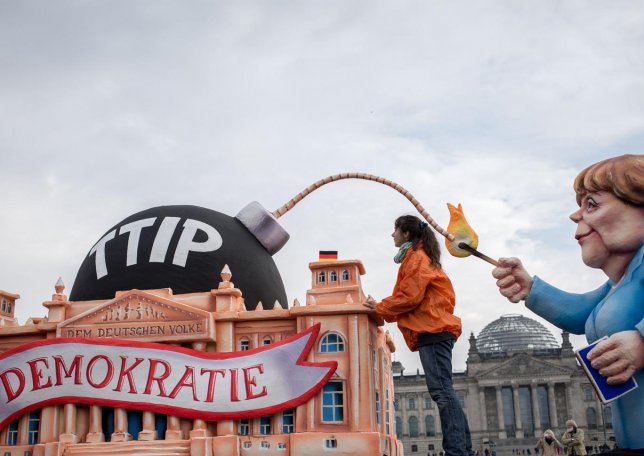 The documents show that US corporations will be granted unprecedented powers over any new public health or safety regulations to be introduced in future. If any European government does dare to bring in laws to raise social or environmental standards, TTIP will grant US investors the right to sue for loss of profits

Today’s shock leak of the text of the Transatlantic Trade and Investment Partnership (TTIP) marks the beginning of the end for the hated EU-US trade deal, and a key moment in the Brexit debate. The unelected negotiators have kept the talks going until now by means of a fanatical level of secrecy, with threats of criminal prosecution for anyone divulging the treaty’s contents.

Now, for the first time, the people of Europe can see for themselves what the European Commission has been doing under cover of darkness - and it is not pretty.

The leaked TTIP documents, published by Greenpeace this morning, run to 248 pages and cover 13 of the 17 chapters where the final agreement has begun to take shape. The texts include highly controversial subjects such as EU food safety standards, already known to be at risk from TTIP, as well as details of specific threats such as the US plan to end Europe’s ban on genetically modified foods.

The documents show that US corporations will be granted unprecedented powers over any new public health or safety regulations to be introduced in future. If any European government does dare to bring in laws to raise social or environmental standards, TTIP will grant US investors the right to sue for loss of profits in their own corporate court system that is unavailable to domestic firms, governments or anyone else.

For all those who said that we were scaremongering and that the EU would never allow this to happen, we were right and you were wrong.

The leaked texts also reveal how the European Commission is preparing to open up the European economy to unfair competition from giant US corporations, despite acknowledging the disastrous consequences this will bring to European producers, who have to meet far higher standards than pertain in the USA. According to official statistics, at least one million jobs will be lost as a direct result of TTIP – and twice that many if the full deal is allowed to go through. Yet we can now see that EU negotiators are preparing to trade away whole sectors of our economies in TTIP, with no care for the human consequences.

The European Commission slapped a 30-year ban on public access to the TTIP negotiating texts at the beginning of the talks in 2013, in the full knowledge that they would not be able to survive the outcry if people were given sight of the deal. In response, campaigners called for a ‘Dracula strategy’ against the agreement: expose the vampire to sunlight and it will die. Today the door has been flung open and the first rays of sunlight shone on TTIP. The EU negotiators will never be able to crawl back into the shadows again.

The leak of the TTIP text comes at a time when senior politicians across Europe have already begun to distance themselves from the increasingly toxic deal. President Hollande announced this weekend that France will veto any TTIP agreement that could endanger the country’s agricultural sector. Germany’s economy minister Sigmar Gabriel has also spoken publicly of TTIP collapsing, and has pointed the finger at US intransigence as the cause. When politicians start playing the blame game in this way, you know they are already preparing their exit strategies. The writing is on the wall.

For those of us in the thick of the EU referendum debate, the contempt shown by the TTIP negotiators to the people of Europe is the most potent reminder of the democratic deficit at the heart of the EU institutions. Today’s leak of the TTIP text leaves the leaders of the European Union with a choice. Either they abandon the TTIP negotiations immediately or they risk seeing the entire European project come crashing down about their ears. They have until 23rd June to decide.

John Hilary is Executive Director of War on Want and author ofThe Transatlantic Trade and Investment Partnership: A Charter for Deregulation, An Attack on Jobs, An End to Democracy, now available in 12 European languages