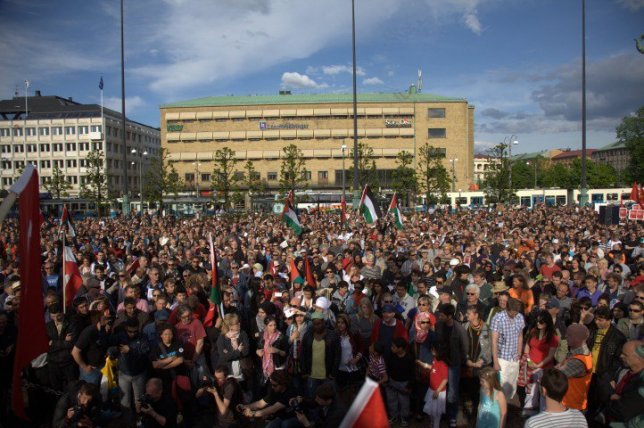 As more European governments line up to recognize a Palestinian state, Israel (and the U.S.) look more isolated than ever.

In his recent meeting with President Obama, Israeli Prime Minister Benjamin Netanyahu saidthat he was “committed to the vision of peace for two states for two peoples.” That sounds nice. But if he’d been pressed, Netanyahu might have admitted that the two states he had in mind were Israel and the United States, not Israel and Palestine.

After all, Netanyahu has done everything possible to demonstrate that he’s not interested in negotiating a two-state solution with Palestinian representatives. The most recent example is the go-ahead given to new construction in the Givat Hamatos neighborhood of Jerusalem, across the Green Line, which will make it more difficult to share the city with a Palestinian state. Over the summer, the Netanyahu government annexed nearly 1,000 acres of West Bank territory. And then there was the disproportionate use of force against Gaza, which left more than 2,000 people dead and the equivalent of the population of Boston homeless.

Netanyahu aside, most Israelis are fervent pragmatists. They don’t support a two-state solution out of idealistic sympathy for the Palestinian cause. Rather, Israelis understand that the laws of demographics—a higher birth rate among Palestinians than Israeli Jews—will make Jews a minority in their own state by 2025. Allowing Palestinians to form a separate state is, to put it bluntly, an internationally legitimate form of ethnic cleansing. It would achieve what partition did for India and Pakistan: create two more homogenous entities. Israel’s survival as a Jewish state depends on the negotiation of a two-state solution.

And yet, despite this obvious self-interest, the Netanyahu government has refused to compromise, in part because there are political actors in his administration even more intransigent than Netanyahu himself. The sticking points include the status of Jerusalem, land swaps that would compensate Palestine for the territory seized by Israeli settlers, and the right of Palestinians to return to land that they owned before the expulsion in 1948. As the more powerful side in the negotiations, Israel has been playing hardball, waiting for the Palestinians to buckle.

It’s absurd, of course, to imagine that a state and a non-state can engage in fair negotiations—unless the non-state has some additional leverage that can compensate for all the advantages the state enjoys. Kosovo, for instance, had the support of the United States and, as importantly, a European Union that could use membership as a carrot to push Serbia to the table to make concessions. Kurdistan, the northern part of Iraq, has used its relative stability and its current role in the fight against ISIS to achieve de facto statehood.

Palestine does not enjoy any of those advantages. But its weakness, paradoxically, has been a kind of strength. The Palestinians have been perpetual underdogs, even as they have acquired quasi-control in Gaza and with the Palestinian Authority in the West Bank. Palestinians who live in those areas have at least some semblance of self-determination, even if it is illusory. Palestinians elsewhere don’t even have that. Without a real state, no one will stand up for all the Palestinians scattered throughout the region—in Israel, Jordan, Lebanon, Egypt, and elsewhere.

For the last couple decades, the most likely route to statehood for Palestine was through negotiations with Israel, usually brokered by third parties like Norway or the United States. But there is another path to statehood that does not go through Israel. Quite a few countries have already recognized Palestine as a state—134 of them, actually. That’s a lot more than Taiwan (21), more even than Kosovo (108). But most of the countries that have recognized Palestine don’t have much economic or diplomatic pull.

That’s about to change.

A new center-left government recently took over in Sweden and immediately announced its intention to recognize Palestine. If it follows through on this pledge, which is likely, it will be the first European country, as a member of the EU, to recognize Palestine. The Swedish foreign minister was blunt in anticipating objections from Washington: “The USA doesn’t decide our policy,” Margot Wallström said. A conservative member of the Swedish parliament has countered that the government must go through the country’s advisory council on foreign affairs. But the new government hadn’t made a unilateral declaration—it had simply signaled a future action, which would follow the necessary protocol.

Even before the international media had digested the Swedish announcement, the UK parliament voted by a large margin—274 to 12—to recommend recognition as well. The UK government isn’t likely to take that step under its current political leadership, but the Labor Party might well be in charge after the May 2015 elections.

Lest you think this was a purely partisan effort, listen to Richard Ottaway, the Conservative chairman of the foreign affairs select committee. He told his parliamentary colleaguesthat Israel’s annexation of 950 acres of the West Bank this summer “outraged me more than anything else in my political life. It has made me look a fool and that is something I deeply resent.” Even the British ambassador to Israel, Matthew Gold, took pains to warn the Netanyahu government indirectly “about the direction of public opinion in Britain and beyond Britain in the absence of progress towards peace.”

Meanwhile, the French government is reportedly mulling a recognition move of its own.

Israel might ultimately care as little about the attitudes of “old Europe” as Donald Rumsfeld did around the invasion of Iraq. But Israel can’t ignore the increasing impatience of its chief supporter, the United States. Immediately after Netanyahu’s meeting last week with Obama, the White House issued a statement declaring that the prime minister’s recent moves “call into question Israel’s commitment to a peaceful negotiated settlement with the Palestinians.”

European recognition won’t magically transform the Palestinian state into a universally recognized entity any time soon. But it does strengthen Palestinian moves to strike off on their own.

One of the first signs of Palestinian unilateralism came two years ago when Mahmoud Abbas, the head of the Palestinian Authority, called on the United Nations to “issue a birth certificate of the reality of the State of Palestine.” The UN General Assembly voted by a large margin to grant Palestine non-member observer status. Only nine countries voted against the resolution: Canada, the Czech Republic, Israel, Marshall Islands, Micronesia, Nauru, Panama, Palau, and the United States.

This win at the UN opened up a wide variety of options for the Palestinians: they could suddenly join 60 UN organizations and agencies. But instead of pushing for these perquisites of UN membership, the Palestinians decided instead not to overly irritate Israel so that they could secure the release of more than 100 long-term prisoners. Last April, however, Abbas changed tactics and announced his intention to join 15 conventions and treaties, including the Geneva Conventions, conventions against torture and genocide, and conventions guaranteeing the rights of women and the disabled.

But even this effort to circumvent Israel and acquire all the trappings of a state is, after the recent Gaza war, not enough to satisfy an increasingly radicalized population. A post-war poll indicates that 72 percent of Palestinians favor an armed intifada against Israel. Meanwhile, a number of analysts have urged the Palestinian Authority to dissolve itself—and stop playing a role in policing Palestinians on behalf of Israel. Frustration with the Netanyahu government is generating a range of different responses.

At the moment, the United States and much of the world is focused on the threat of ISIS. As a result, Secretary of State John Kerry doesn’t have time to devote to yet another round of pleading with Israelis and Palestinians. But if anything, ISIS is a reminder of what happens when legitimate grievances—those of Sunnis in Syria and in Iraq—are ignored. Strong, democratic states are an antidote to ISIS-style extremism. As such, a strong Palestinian state is in the interests of Israel, the United States, and the entire Middle East.

At his meeting with Obama, Netanyahu said that it was time to “think outside the box.” The Palestinians, by pursuing statehood by all means necessary, are doing just that, as are several European countries. It’s time for Israel to do the same.

John Feffer is the director of Foreign Policy In Focus.