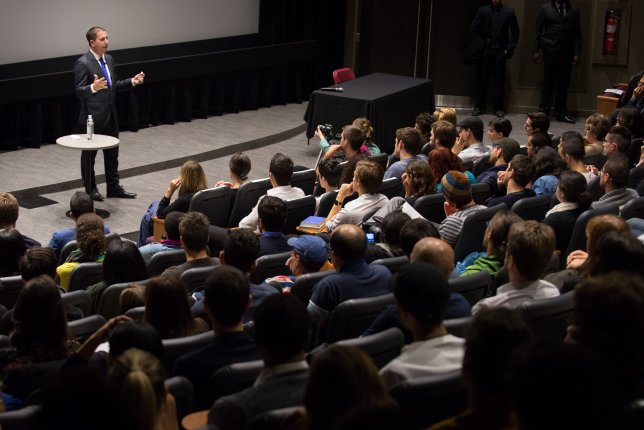 This past month, Glenn Greenwald stopped by Montreal on his Canadian speaking tour. The Concordia University event was a fundraiser for the Freedom of the Press Foundation and began with a trailer of CITIZENFOUR, a film portrait of Edward Snowden, which is being screened on the November 13 by Rencontres Internationales du Documentaire de Montreal (RIDM). Greenwald stood in front of an audience of close to 700 people on the Friday of a week that will become a part of contemporary Canadian history. He was travelling with several bodyguards, more than one would initially think is necessary , however given his role in the publication of top secret documents in recent years, the need for security is not an imaginary one. Greenwald’s visit to Canada coincided with the death of a Canadian soldier in Saint Jean sur Richelieu and the shootings in Ottawa which led to the death of Cpl. Nathan Cirillo.

These incidents were quickly linked to terrorist ideology, validating the fears many hold that Canada is a target for extremists. The talk was supposed to be solely on the state of surveillance and the assault on civil liberties, however given the relevance of the events to issues of security/civil liberties, Greenwald began his talk by discussing how events such as these are used to manipulate the emotions of the public to justify the expansion of government powers. The language used and how events are framed are important to recognize; Greenwald noted how often the word terrorism is used and how its use serves a particular purpose. By branding the events in Saint Jean sur Richelieu and Ottawa as acts of terrorism, it invokes certain emotional responses from the public that can then be manipulated to justify the expansion of government powers.

It also serves to legitimize the endless state of war Canada has now found itself in. The decision to join the airstrikes against ISIS in Iraq and Syria earlier in the month was not a unanimous one; the branding of the shooting in Ottawa as terrorism can function to generate more support among those who are skeptical. Greenwald also remarks how the word terrorism is used to put an end to debate and how despite it being a word that is used quite often, there exists very little discussion about what it means exactly.

Following the events in Saint Jean sur Richelieu, Greenwald wrote an article that sparked outrage among many Canadians. He responded to the shock many felt of such an act occurring on Canadian soil by pointing out the devastation that Canadian policies have caused in other parts of the world and that an act of “retaliation” should therefore not have come as such a surprise. The response he got to that article was that it was too soon to make such comments and that it was not only inappropriate but insensitive. Greenwald addresses what he refers to as the “too soon fallacy”; he argues that it is not right to claim that “it is not time for politics” because that essentially allows the government response to be the only response. The Conservative government had no qualms about instantly politicizing the events, so Greenwald argues all that he and others like himself are doing when they are critical of the government response is providing a counter narrative. He insists on the importance of asking the right questions such as ‘what are our policies that may be perpetuating this ongoing violence?’

After having covered the week’s events, he moved on to discuss issues of surveillance and privacy. He spoke of his surprise at the media attention his story on CSEC spying on Brazil’s Ministry of Mining and Energy. He noted that usually his publication of spying stories attract more attention in the countries being spied on and not particularly in the ones carrying out the spying. Greenwald suspects Canada’s spying on Brazil garnered a lot of attention in the Canadian media primarily because many were not even aware of CSEC’s existence and also due to cognitive dissonance. Canadians seem to associate mass surveillance and the privacy violations that occur as a result as American issues, so to learn that their country was engaged in similar problematic behavior came as a surprise.

Greenwald went on to stress the importance of privacy and how we should all be concerned at the extensiveness of state surveillance. He argues against the notion that one should not be concerned if they do not have anything to hide. Threats to our privacy are threats to our freedom; people who think they’re in a state of surveillance change their behavior and act not out of their own agency but in ways adhering to social convention. A state of surveillance creates a prison of the mind as well as compliant societies. The talk came to a close with Greenwald describing the first time he met Edward Snowden and the impact that Edward Snowden has had on his life. To Greenwald, Snowden’s story highlighted the power of the individual and an ‘antidote’ to the tempting defeatist attitude one can adopt in the face of such an overwhelming injustice. A fruitful Q&A session brought to an end an event filled with timely commentary.