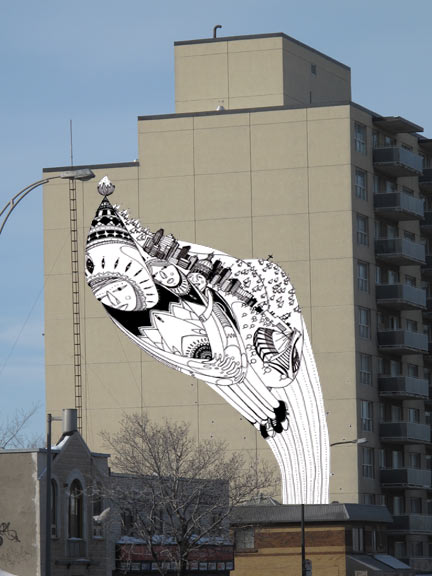 AIJ’s MR Wiseman recently read the handwriting on the wall. It belonged to artist-at-large :Peru.

For a free trip, go to www.peru143.com and explore all of his creations.

Your most recent mural is of a “Diversitree”; where are your roots? From where do you derive your energy?

That was my most recent “commercial” mural— I paint a wall almost every week. My roots are spread throughout the world; I grew up in Lima, but since then I’ve lived in Ottawa, Montreal, Vancouver and Barcelona. Peruvian culture dominates my roots but they all meet at the center. We all come from the same place and have more in common than we may think. For murals I get my energy from the people I communicate and interact with; for the rest, I get inspired by everything from my girl to a good meal or a good tune.

A rather unimaginative, but laced with deep psychological insight, follow-up: if you were a tree, what kind would you be?

Haha, I’ve probably been a few kinds of trees in past lives. I’ve always liked African Baobabs and Japanese Bonsai, I’m supposed to get one in exchange for a design soon. I’m really into these psychedelic root formations you can find from Indochina’s ruins to Mexico’s cenotes (underwater caves), or when they grow around carved rocks, or reach hundreds of feet down for water. I would love to visit the redwood forest someday as well. Does that answer your question?

Yes, just I suspected... but seriously now, will murals stop the scourge of our time that is the great graffiti menace?

There’s nothing you can do to stop it. A city might make a dent every year by wasting a million dollars cleaning it up, but it’s far from a solution. In Montreal, the Mayor’s brother has a good grasp of something more effective, which is collaborating with community centers and muralists to enhance certain areas. You create a direct dialogue with some artists that can work together in the hopes of getting some legal walls for younger kids to learn on, but not everyone sees murals as reclaiming space from graffiti. Some people think it proliferates graffiti and encourages others to join in the decoration— which usually means teenagers who don’t know anything about graffiti making a mess. However, graffiti does not belong on legally sanctioned walls alone, so it’s the best solution I can think of. You can build walls to protect your city from a tsunami, but everyone is still gonna get wet.

While someone would be hard- pressed to accuse you of graffiti, the word itself is derived from the Italian graffiare, “to scratch”, what is it that gives you the, ahem, itch?

I find Graffiti culture is a tightly-bound community of talented and untalented people who inevitably inspire each other for pure enjoyment. There’s an innate need for humans to write their names on walls, from the cave ages to the Egyptians. Some do it for fame and attention, some do it for the thrill, others do it because they are tired of being overwhelmed by ad campaigns that tell them they should consume instead of create. Through drawing and painting I found my voice, as well as an appreciation for myself and the world as a whole. I believe that the purpose of art in life, if there is any, is to enlarge the dimensions of our soul by exercising our creativity and lay logic and reason to rest. Not only does art have the ability to give one a means of self-expression, but through catharsis one is able to learn about what is important in life through self-actualization; the world desperately needs to get in touch with their inner art vandal. We have an obligation to ourselves to dig up our true identity which, quoting an article I read on Art Crimes.Org while growing up, gets “buried by years of acting like other people.” Not only this, but one must respond to the cultural responsibility and contribute something.

Art belongs to the people, in the streets, not in pretentious galleries and museums. At least contemporary art should be open to everyone— to be appreciated. There’s enough brick and concrete out there as is, we need to decorate it and put some colour into our environments. My “graffiti” will always stay in the streets, otherwise it couldn’t be called that. I don’t like this obsession with labeling ourselves, I just know my purpose in this life is to do art and I don’t argue with it. You don’t put yourself at risk on so many levels, or spend so much of your time doing something, unless it has a deeper meaning to you— whether you understand that meaning or not.

Photo: shopped- it is a proposed 13-story mural at Montreal’s Habitations Bourret