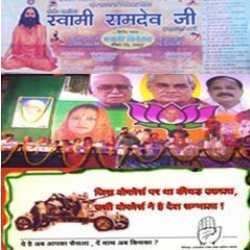 If India is not to be handed over to big business and a rabidly communal fringe, it is best to keep Narendra Modi out of the Prime Minister’s Office.

ELECTIONS 2014 are remarkable for a number of reasons. The most remarkable is that the Bharatiya Janata Party (BJP) and the opposition National Democratic Alliance (NDA) have sought to frame their campaign as a battle to make Narendra Modi Prime Minister and establish not just NDA rule but a Modi sarkar. This is not because of unanimous support for Modi either within the BJP or the NDA. Many senior leaders have been brushed aside in the drive to make Modi the face of the BJP and the NDA. L.K. Advani has been left sulking, Jaswant Singh sacrificed and Sushma Swaraj disregarded on more than one occasion. Moreover, this drive to clothe the BJP’s attempt to return to power with a cult of personality occurs despite Modi’s role in the 2002 pogrom in Gujarat and his unabashedly communal ideology. Let there be no mistake, there is no effort here to walk away from a communal past or agenda, as some analysts claim.

However, a second remarkable feature of the election is the effort to make “development”, governance and corruption-free rule a central plank of the campaign, backed by a promise to replicate a Modi-manufactured “Gujarat model” across the country. The Gujarat model is presented as a combination of growth, industrialisation, inclusiveness and rapid advance in human development indicators. The claim of being corruption-free is nothing less than hogwash. And those who have bothered to look at the evidence will find that Gujarat’s human development record ranges from poor to dismal, its growth record is by no means the best among States in the country, and the distribution of the benefits of whatever growth has occurred points to discrimination rather than inclusiveness.

On the industrialisation front, Modi’s Gujarat has an advantage, having been heir to a legacy of industrial development which was much better than average. What Modi has done while in power is to leverage that and selectively win the support of big capital by showering concessions on them. Some big capitalists are of course Modi’s creation, the most visible being Adani. According to Forbes Asia, which is otherwise blatantly pro-business, documentary evidence shows that Adani was given on a 30-year lease 7,350 hectares of land in Mundra for a pittance of between one cent and 45 cents a square metre, which was then sublet to even public sector Indian Oil Corporation for $11 a sq m. On a part of the land, Adani has built a port, a 4,620-megawatt thermal power plant and a special economic zone (SEZ) for units that will use Adani’s port. A chunk of the surpluses of these projects come straight out of the pockets of the State government.

There are others whom Modi has wooed to win the support of big capital, with the Tatas and Reliance being prominent among them. Leaked documents showed that Modi had doled out Rs.30,000 crore in sops to Tata Motors to entice them to move the Nano project to Gujarat. The Modi government not only provided a soft loan of Rs.9,570 crore at a notional interest rate of 0.1 per cent to set up the project but also deferred repayment for 20 years, besides meeting all cost of infrastructure development, cutting power tariff rates, and subsidising expenditure of Rs.700 crore on shifting machinery and equipment from Singur in West Bengal to Sanand. According to one estimate, each Nano car costs the government Rs.60,000 in base year prices. Not surprisingly, the Tata group was not hit too badly when the project bombed, with capacity utilisation at a reported 25 per cent.

There have been many other instances of favours to big business. A recent report of the Comptroller and Auditor General of India (CAG), relating to 2012-13 alone, has indicted the Gujarat government and public sector undertakings (PSUs) in the State for extending “undue” benefits to major industrial houses, causing a loss of Rs.750 crore to the State exchequer in a single year. The major beneficiaries of government largesse included big corporate entities such as Reliance Industries Ltd (RIL), Essar Steel, and Adani Power Ltd (APL), the report said.

Such instances have won support for Modi among India’s big industrialists. Reports of big business leaders embracing Modi and praising his governance are now legion. Those cronies who have benefitted from Modi’s concessions want more. Those who have not, hope to reap benefits when the ambit of Modi’s rule is expanded from a single State to the nation as a whole. As a result, Modi is now the favoured choice of big business for Prime Minister. That would partly explain the huge expenditure under the unrestricted “party budget” for the Modi campaign, which makes nonsense of the Election Commission’s claim that it is limiting campaign expenditure. It also possibly explains the support that Modi and “his BJP” get from a media that specialises in hype.

The reason for this turn to the BJP on the part of big capital is easy to understand. Indian big business tasted blood during 2003-08, when India’s 9 per cent gross domestic product (GDP) growth was accompanied by soaring profits driven substantially by huge concessions from government in the form of infrastructural support, tax breaks, large volumes of inexpensive credit, and access to cheap natural and scarce resources (like spectrum). Neoliberalism had revealed what it was meant to be: a huge engineered redistribution of income and wealth in favour of a narrow elite.

But towards the end of its second term, a United Progressive Alliance government hobbled by restraints on fiscal spending imposed by the threat of foreign investor exit, inability to mobilise resources because of slowing growth, and a spurt of revelations on big-ticket scams was unable to meet the expectations that big business had of transfers it should receive from or mediated by the state. Slowing growth in an India that had performed relatively well during and after the global crisis also showed how much the high-growth trajectory was dependent on those concessions.

And to top it all, the neoliberal agenda of deregulating administered prices, slashing subsidies, hiking user charges and linking domestic to international prices (wherever the former were lower) unleashed cost-push inflation that the UPA-II government was unable to control.

Need for an authoritarian hand

Blinded by its ideological blinkers and fearing a backlash against neoliberalism, big business settled for the argument that India’s economic woes and the threat to its profits were the result of the UPA’s paralysis because of divisions within its leadership on the next steps in reform, its fiscal overstretch to fund “populist” measures such as employment guarantees and food subsidies, and the debilitating effects of corruption in an undisciplined government. What was needed was a firm authoritarian hand, a commitment to neoliberal reform, and no qualms on distributing freebies and concessions to big business while slashing allocations for measures that address the worst forms of deprivation.

The problem is that India is a democracy where every adult citizen has a vote. And there is no reason whatsoever why what is seen as good for big business will be seen as good for the ordinary citizen or for India as a nation. So the individual and the party that match the requirements of big business must also have other characteristics that can exploit the anti-incumbency wave against the two-term UPA.

It is here that the toxic mix of a Hindutva agenda (that can be used to draw some votes) and the version of “development” that Modi represents comes in handy. If the issue was just demonstrated success in terms of so-called “good governance” or even growth at the State level, there are others in its fold like Shivraj Chauhan and Raman Singh and models like Madhya Pradesh and Chhattisgarh that the BJP could have turned to. But compared with them, Modi, with his record of communal polarisation and his Gujarat model, has an advantage. He can draw on the support of the Rashtriya Swayamsewak Sangh (RSS) and the communally biased sections of the Hindu majority, the ideologically neoliberal and aspirational upper-middle-class Indian and big business and rentiers with bags of ill-gotten money. Which is why he has won the battle within his party and the NDA. The election will show whether he has managed to win adequate voter support to satisfy his prime ministerial ambitions as well.

The question is: Will Modi be able to meet the expectations of big business if he does emerge the leader of an NDA government after the election? That, however, seems unlikely. If the pursuit of a neoliberal agenda is what drove the economy to stagflation under the UPA, there is no reason why the pursuit of a similar strategy by a hypothetical Modi sarkar would deliver anything different. Those who expect it to presume that all that is needed is authoritarian or “decisive” governance.

But, as even a sympathetic and neoliberal non-resident analyst (see Arvind Subramanian in Business Standard, April 5) has put it, there are constraints. The plus side, in this view, is that Modi’s objectives are those of restoring macroeconomic stability and reviving investment, especially in infrastructure. So given control over policy “he can, through executive action, reform policies in agriculture to put a lid on rapid rural wage and price rises. He can also phase out fertilizer and fuel subsidies to cut the fiscal deficit.” Moreover, in this view, to revive investment as was “his signature achievement in Gujarat, where he has been Chief Minister for 13 years”, he would on taking office “identify the 25-50 most important stalled infrastructure projects, locate the bottlenecks and authorise their removal”.

Unfortunately, our analyst argues, assuming this scenario to be true, Modi would face two challenges. The first is that “the levers of economic power affecting infrastructure projects—in power and land, for example—reside with the States”, a majority of which will be controlled by uncooperative opposition parties. Additionally, other institutions, such as the Supreme Court, the Election Commission and the office of the Comptroller and Auditor General, are likely to prove a drag. “The Supreme Court, for example, has ruled on telecommunications, taxes and coal, all of which affect project execution and investment. Mr Modi, in other words, cannot call all the shots.” So the problem is not Modi, but India’s democratic institutions.

In practice, this attempt at nuance is likely to prove wrong, and a hypothetical Modi government would seek to subvert democratic institutions and have its way. So if India is not to be handed over to big business and a rabidly communal fringe, it is best to keep Modi out.