Home > English > Alternatives International Journal > 2014 > May 2014 > India: Big Business Taking Over Will be Undoing of Democracy 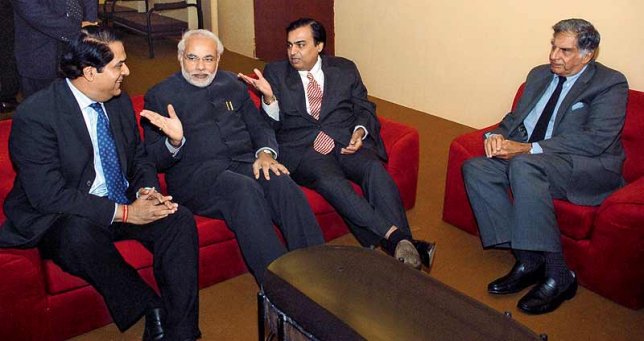 India: Big Business Taking Over Will be Undoing of Democracy

The run-up to the 2014 general elections in India has been an unprecedented demonstration of the massive infusion of money in electoral campaigning. A veritable carpet-bombing of India’s voters with the opposition BJP’s message is everywhere to be seen, from advertisements in newspapers, on TV, Youtube, Radio, Mobile Phones, CDs and the Internet, to billboards in all metropolitan cities and small towns and on transport vehicles, including inside the Delhi Metro trains. In effect, it has blocked out all other political parties as far as public advertising goes. This vast campaign has been on a scale never seen in history, estimated by some to be costing Rs 5000-6000 crores or more (from 800 to over 900 million dollars).

These are astronomical figures for any one political party to be spending in an election campaign, when its earnings just a few years ago were shown to be far more limited. So who on earth is funding such a gigantic publicity blitz? There should be no doubt in our minds that some of the biggest private corporations with deep pockets that had already publicly pledged support for the candidature of Mr Narendra Modi as the Prime Minister (even before the BJP had chosen its PM candidate) are behind this. Big Business loves Modi and his so-called “Gujarat Model” because it grants huge concessions to industrial projects (e.g. Tata’s Nano car project got a loan of Rs 9570 crores to be paid back at 0.1% interest starting only after 20 years!). Business tycoons adore Modi for his no-questions-asked clearances of industrial projects, bypassing all social and environmental checks and shutting out all opposition.

For decades questions have been asked about powerful interests with money influencing elections in India, but the 2014 elections send a very dangerous signal about where we are headed. There are strict rules that apply to election campaign spending limits for individual candidates standing in elections in India, but these rules do not apply to campaign advertising by political parties. Although political parties are required to submit details of donors who have made donations above Rs 20,000 to the Election Commission, every year, according to the Association of Democratic Reforms (ADR), 75% of the donations are unknown. The time has come now for all Indians concerned about the health of India’s electoral democracy to call for strict scrutiny, controls and public disclosure of the role of private sector funding of political parties.

Since 2012 there has been much debate about the sources of funding of India’s political parties. According to the IncomeTax returns filed by various parties and contribution reports submitted to the Election Commission, which were accessed by two organisations through the Right to Information Act, the top five parties with the highest income between 2004-05 and 2010-11 were: the Congress with Rs. 2,008 crore (333 million USD), the BJP with Rs. 994 crore (165 million USD), the BSP with Rs. 484 crore (80 million USD), the CPI(M) with Rs. 417 crore (69 million USD) and the SP with Rs. 279 crore (46 million USD).

The latest figures from the Association of Democratic Reforms (ADR) show that the BJP received the maximum donations of Rs. 192.47 crore (32 million USD) from 1,334 corporate donors, followed by Congress, which received Rs. 172.25 crore (28 million USD) from 418 donors. The inclination of corporates towards the Modi-driven BJP is very clearly reflected in the maximum number of donations to his party.

Be that as it may, we need to look at the wider picture and the bigger story: the elephant in the room that post-Nehruvian India doesn’t seem to want to hear about. This is the story of crony capitalism and concentration of power through the nexus of big business interests and politics. During the days of license-permit raj, corrupt ministers and bureaucrats got cuts and commissions on Govt contracts, but all that is peanuts compared to the capitalist Disneyland that post-1991 India has come to be. Crony capitalism version 2 has meant industrialists have entered parliament and dictate policy from the inside. Totally unviable projects have been funded in the past two decades by nationalised banks, leading to a loot of their assets and a massive accumulation of bad loans (estimated two years ago at over 16 billion US dollars). Dubious funding and skewed approval of the projects of a few oligarchs in airlines, telecom and coal are some of the big scams that we have been hearing about in the past few years, not to mention immunity for non-compliance with tax rules. What were India’s taxmen doing all these years? It took the Supreme Court of India to book the Sahara Parivar’s big boss; it’s astonishing that this gigantic corporation doesn’t even publish annual accounts, and that the flamboyant owner of Kingfisher is still flying high with full impunity!

The big private players have used widespread networks of lobbyists to influence the selection of ministers in governments and the choosing of pliant bureaucrats (we have heard those infamous Radia Tapes). And no one talks of the overarching influence exercised by the Ambanis and their Reliance empire on India’s political system. When Hamish Macdonald published his book Polyester Prince, the book was blocked and nearly disappeared from public gaze. Under the BJP’s NDA disinvestment programme, the Ambanis acquired the Indian Petrochemicals Corporation Limited, giving them huge influence over the petrochemical industry in India. They nearly got the NDA government to privatize gems of India’s public sector like Bharat Petroleum and Indian Oil. In a recent book called Gas Wars, the intrepid journalist Paranjoy Guha Thakurta has exposed the story of their control of India’s biggest oil and gas reserves known as the Krishna Godavari basin, despite incredible wrongdoing, violation of government contracts, and a huge loss to the exchequer.

An unbridled corporate bid for total control of the Indian state, (not just the economy) is underway.

It is being murmured that the big business elites now want a free hand to further reshape the economic and political landscape of India, and that is what is behind the no-holds-barred bid for power in 2014. The Ambanis are the big guys leading this pack, and have pulled out all the stops in this election campaign. This clearly isn’t about some ethical belief in India’s constitutional values, it’s all about making big bucks. Open your eyes fellow Indians and democrats. If corporates fully capture the state, we may lose the precious democratic space that exists in India. The time has come for a full and complete ban on private corporate financing of India’s political parties.