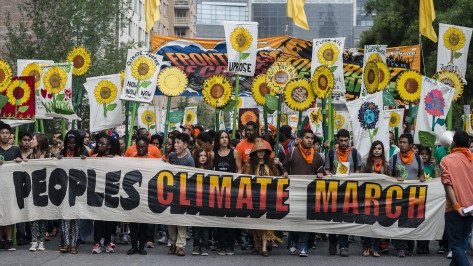 How Did Leaders Respond to the People’s Climate March?

About 400,000 people went to the streets on September 21st to ask for real actions to address climate change. It was the greatest climate march in history. The UN Climate Summit organized by Secretary General Ban Ki-Moon took place two days later with the participation of 100 heads of state and 800 leaders from business. How did this Summit react to the demands of the peoples climate march? Did it meet the expectations?

According to Ban Ki-Moon and other leaders, it was a success. To see if that is true, we should look at: 1) what science is telling us; 2) the previous commitments made by governments; and 3) how these commitments at the UN have improved in order to address the mismatch between what has to be done and what is being done.

The main point of reference for any assessment is the greenhouse gas emissions gap for this decade. What we do now is more important than what we will do in the next decade or in 2050. If we don’t close the emission gap by 2020, we will lose the possibility to catch up with the path that is needed to limit the global temperature rise to less than 2 degrees Celsius from pre-industrial levels.

But the tragedy is even bigger. After eight years of negotiation in the UN, and with the current voluntary pledges of governments, we have only reduced 3 gigatons of CO2e per year from the business-as-usual scenario, and we should have reduced at least 16 gigatons per year by 2020. So, putting aside words and speeches, governments reduced less than 20% of what is needed this decade. So that is the reality. Now, how did world leaders improve their voluntary pledges for this decade if they believe, as Ban Ki-Moon said in his summary of the Climate Summit, “that climate change is a defining issue of our time and that bold action is needed today to reduce emissions”? The United States ratified its current weak pledge of 3% of emission cuts by 2020 compared to 1990 levels, which means that they will do even less than what was agreed for the first period of the Kyoto Protocol which they never ratified and which ended in 2012. President Obama even went so far as to call on other countries to “follow US leadership” on climate! If everybody did what the United States is doing, the emissions gap would be much larger!

The European Union and all the other historical emitters didn’t increase their voluntary pledges for this decade. Also, China and the emerging countries didn’t increase their previous pledges. Nobody addressed the key issue of the gap of this decade. Some prefer to make promises for the next decade until 2030 or 2050, speaking about emissions reductions of 50 to 85% without even mentioning that, according to science, global emissions must be 30 gigatons of CO2e per year by 2030 “based on the assumption that the 2020 least-cost level of 44 GtCO2e per year will be achieved,” according to the UNEP Emissions Gap Report.

Weak Financing The other key point to assess is funding for developing countries that are suffering from climate change while being the least responsible for the problem. Almost six years ago, developed countries committed to support developing countries with $100 billion per year by 2020. At that time, the offer enticed many governments to accept the Copenhagen Accord and the Cancun agreements. The assumption was that the $100 billion per year were going to come from public sources from developed countries, since States cannot commit private or market funds that they do not control.

Several years have passed, and the $100 billion per year is still up in the air. Developed countries have re-packaged some of their development aid with the label of climate, and even so, the total amount is far from reaching that promise. Developing countries were expecting to see a great share of these $100 billion per year go to developing countries through the Green Climate Fund, but in reality, the Fund is tiny.

For Ban Ki-moon, some heads of state, the business sector and the World Bank, the Climate Summit was a success because, from the beginning, their aim was not to close the emissions gap or to fill the Green Climate Fund. Rather, they sought to use this event – which is not part of the official process of UN negotiations – to launch more initiatives and carbon markets and to use the “summary of the chair” (Ban Ki-moon) as a way to introduce these proposals in the coming official negotiations in Lima, Peru, this December.

Their two clear goals were focused on “carbon pricing” and “Climate Smart Agriculture.” “Carbon pricing” is a new name used to promote carbon markets in a new, clever way: by combining candy and poison. Under “carbon pricing,” the World Bank, which is the leading promoter of this initiative, mixes two very different things: carbon taxing and “cap and trade.” Carbon taxing penalizes companies and industries for their actual polluting emissions, while under cap and trade, governments establish an emissions cap and give stakeholders permits to pollute. After the permits have been distributed to the level of the emissions cap, they can be traded privately. The wealthiest and most polluting companies can buy from others and continue to pollute, and the market defines the price of each permit, which involves a lot of speculation and leads to the creation of new financial bubbles.

The Emissions Trading Scheme (ETS) of the European Union established the biggest carbon market in 2005. After eight years of implementation, even conservative sources estimate that between one third and two thirds of the carbon credits brought into the ETS “do not represent real carbon reductions.” Instead, the ETS has worked to subsidize polluters and pass the costs to consumers. Carbon markets are particularly susceptible to fraud. A German court jailed six people involved in a €300-million fraud scheme selling carbon permits through Deutsche Bank, and courts in London jailed 11 people. Also, the UN had to disqualify its main Clean Development Mechanism verification agency in 2009, and in 2011, it had to suspend Ukraine due to emissions under-reporting fraud. A good summary can be found in Scrap ETS.

These carbon markets move a lot of money that benefits many businesses, but certainly not the poor. According to the International Energy Agency, “The value of carbon credits produced from new CDM projects reached around $7 billion per year prior to the global financial and economic crisis.” But from all the CDM projects, “only 0.2% of the total have been designed to increase or improve energy access for households.”

To think that markets are going to solve the climate chaos is madness. But we cannot be surprised, because it is the same madness that the World Bank promoted with privatizations and “structural adjustments” all over the world with very well known bad results that have even lead to some self-criticism within that institution.

The other new market mechanism that Ban Ki-Moon highlighted in his summary, and that is also promoted by the World Bank, is Climate Smart Agriculture. La Via Campesina, a global organization with 200 million small farmer members, has rejected this initiative in these terms: “Climate Smart Agriculture, like Reducing Emissions from Deforestation and Forest Degradation (REDD), will expand the carbon market and its use for financial speculation. The possibility of big profits with investments in carbon credits generated from farmlands involved in Climate Smart Agriculture projects will increase speculation in the carbon market, leading to further “carbon land grabs” by large-scale investors and producers, and the further displacement of peasant and smallholder farmers, just as REDD displaces indigenous people. Under this Climate Smart Agriculture framework, there is little hope of reducing and removing greenhouse gases, trying to solve food insecurity or any significant rural economic and social development. The problems of poverty, food insecurity and climate change are not market failures, but rather are structural flaws that will persist and worsen with its implementation.”

After this week in New York, it is once again obvious that real solutions are not going to come from the UN, heads of state, corporations or the World Bank. Our main goal in strengthening marches like the one on September 21st is not to target the UN climate negotiations, but to build a movement that is strong enough to challenge and change the capitalist system. The main lesson from this week is that we need to make even stronger and more permanent mobilizations with much more clear messages targeting the main polluters, which are the big corporations. A march that calls for “climate action” without clearly saying what that action should be can be manipulated or used to promote wrong actions. In that sense, more than 370 organizations around the world have put forward a 10-point plan to really address the structural causes of climate change. At the next UN negotiations Lima, Peru, the challenge for social and grassroots movements is to come out with a plan of action to support clear demands to stop climate chaos.