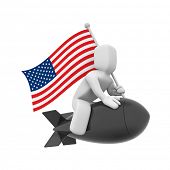 Humanitarian arguments, if consistently applied, could be used to flatten the entire Middle East

Let’s bomb the Muslim world – all of it – to save the lives of its people. Surely this is the only consistent moral course? Why stop at blowing up Islamic State, when the Syrian government has murdered and tortured so many? This, after all, was last year’s moral imperative. What’s changed?

How about blasting the Shia militias in Iraq? One of them selected 40 people from the streets of Baghdad in June and murdered them for being Sunnis(1). Another massacred 68 people at a mosque in August(2). They now talk openly of “cleansing” and “erasure”(3), once Islamic State has been defeated. As a senior Shia politician warns, “we are in the process of creating Shia al-Qaida radical groups equal in their radicalisation to the Sunni Qaida.”(4)

What humanitarian principle instructs you to stop there? In Gaza this year, 2,100 Palestinians were massacred: including people taking shelter in schools and hospitals. Surely these atrocities demand an air war against Israel? And what’s the moral basis for refusing to liquidate Iran? Mohsen Amir-Aslani was hanged there last week for making “innovations in the religion” (suggesting that the story of Jonah in the Qu’ran was symbolic rather than literal)(5). Surely that should inspire humanitarian action from above? Pakistan is crying out for friendly bombs: an elderly British man, Mohammed Asghar, who suffers from paranoid schizophrenia, is, like other blasphemers, awaiting execution there after claiming to be a holy prophet(6). One of his prison guards has already shot him in the back.

Is there not an urgent duty to blow up Saudi Arabia? It has beheaded 59 people so far this year, for offences that include adultery, sorcery and witchcraft(7). It has long presented a far greater threat to the west than Isis now poses. In 2009 Hillary Clinton warned in a secret memo that “Saudi Arabia remains a critical financial support base for al-Qa’ida, the Taliban … and other terrorist groups.”(8) In July, the former head of MI6, Sir Richard Dearlove, revealed that Prince Bandar bin Sultan, until recently the head of Saudi intelligence, told him: “The time is not far off in the Middle East, Richard, when it will be literally ‘God help the Shia’. More than a billion Sunnis have simply had enough of them.”(9) Saudi support for extreme Sunni militias in Syria during Bandar’s tenure is widely blamed for the rapid rise of Isis(10,11). Why take out the subsidiary and spare the headquarters?

The humanitarian arguments aired in parliament last week(12), if consistently applied, could be used to flatten the entire Middle East and West Asia. By this means you could end all human suffering, liberating the people of these regions from the vale of tears in which they live.

Perhaps this is the plan: Barack Obama has now bombed seven largely-Muslim countries(13), in each case citing a moral imperative. The result, as you can see in Libya, Iraq, Pakistan, Afghanistan,Yemen, Somalia and Syria, has been the eradication of jihadi groups, of conflict, chaos, murder, oppression and torture. Evil has been driven from the face of the earth by the destroying angels of the west.

Now we have a new target, and a new reason to dispense mercy from the sky, with similar prospects of success. Yes, the agenda and practices of Isis are disgusting. It murders and tortures, terrorises and threatens. As Obama says, it is a “network of death”(14). But it’s one of many networks of death. Worse still, a western crusade appears to be exactly what it wants(15).

Already Obama’s bombings have brought Isis and Jabhat al-Nusra, a rival militia affiliated to Al Qaeda, together(16). More than 6,000 fighters have joined Isis since the bombardment began(17). They dangled the heads of their victims in front of the cameras as bait for war planes. And our governments were stupid enough to take it.

And if the bombing succeeds? If – and it’s a big if – it manages to tilt the balance against Isis, what then? Then we’ll start hearing once more about Shia death squads and the moral imperative to destroy them too – and any civilians who happen to get in the way. The targets change; the policy doesn’t. Never mind the question, the answer is bombs. In the name of peace and the preservation of life, our governments wage perpetual war.

While the bombs fall, our states befriend and defend other networks of death. The US government still refuses – despite Obama’s promise – to release the 28 redacted pages from the Joint Congressional Inquiry into 9/11, which document Saudi Arabian complicity in the attack on America(18). In the UK, in 2004 the Serious Fraud Office began investigating allegations of massive bribes paid by the British weapons company BAE to Saudi ministers and middlemen. Just as the crucial evidence was about to be released, Tony Blair intervened to stop the investigation(19). The biggest alleged beneficiary was Prince Bandar, mentioned above. The Serious Fraud Office was investigating a claim that, with the approval of the British government, he received £1bn in secret payments from BAE(20).

And still it goes on. Last week’s Private Eye, drawing on a dossier of recordings and emails, alleges that a British company has paid £300m in bribes to facilitate weapons sales to the Saudi National Guard(21). When a whistleblower in the company reported these payments to the British ministry of defence, instead of taking action it alerted his bosses. He had to flee the country to avoid being thrown into a Saudi jail. Smirking, lying, two-faced bastards – this scarcely begins to touch it.

There are no good solutions that military intervention by the UK or the US can engineer. There are political solutions in which our governments could play a minor role: supporting the development of effective states that don’t rely on murder and militias, building civic institutions that don’t depend on terror, helping to create safe passage and aid for people at risk. Oh, and ceasing to protect and sponsor and arm selected networks of death. Whenever our armed forces have bombed or invaded Muslims nations, they have made life worse for those who live there. The regions in which our governments have intervened most are those which suffer most from terrorism and war. That is neither coincidental nor surprising.

Yet our politicians affect to learn nothing. Insisting that more killing will magically resolve deep-rooted conflicts, they scatter bombs like fairy dust.

Published in the Guardian 1st October 2014