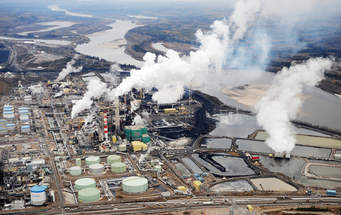 80,000 people were evacuated from Fort McMurray during and following the forest fire that ravaged the city last month. Among these 80,000 were hundreds of temporary foreign workers, who have been left in a precarious position given their lack of social services support system in Canada, but also because many of them were tied to single employers who no longer have work to offer. In this case, the work permit has the name of the employer on it and is only valid so long as the person continues to be employed by the listed employer. Moreover, temporary foreign workers and migrant workers with permanent resident status often send remittances home to families.

Initially many evacuees were sent to the evacuation centres and told to register at the Red Cross. The evacuation centres did not discriminate on the basis of status, so migrant workers were lumped in with permanent residents and citizens, Marco Luciano, the spokesperson for Migrant Workers Alliance (MWA), explained to Alternatives International in an email. He went on to say that they were able to find over 300 temporary foreign workers at the centres within the first five days, many of whom, he said, had immigration status issues.

Marisa Méndez of the Canadian Council for Refugees (CCR) explained to Alternatives International in an email the CCR has recommended to the federal government that affected migrant workers should have their work permits opened so that they are no longer tied to one employer. This would allow workers to find work in the case that their employer had let them go, or that they could not find work due to the fire. While Immigration, Refugees and Citizenship Canada has released special measures as of May 27 to try and address the issues faced by temporary foreign workers, these measures do not fully tackle the issue.

The special measures by Immigration, Refugees and Citizenship Canada stipulate that an extension fee for work permits will be waived until August 3 of this year, that any documents destroyed will be replaced free of charge and that temporary foreign workers tied to employer specific permits whose employers have been affected by the fire will be able to apply for new jobs with new employers once their names have been given to Labour Market Impact Assessment. Only after this process can workers apply for a permit to work for the new employer. Workers will be unable to work until a new permit is approved.

The special measures for employment insurance (EI), to provide workers with security in the interim, are minimal. The Coalition for Migrant Workers Right Canada (CMWRC) outlines that under current laws in Fort McMurray workers need 630 work hours in the previous 52 weeks to qualify for EI. Workers qualifying for EI would receive a base of 55% of their weekly salary. However, many workers have not accumulated the required hours, as many foreign workers arrived in Alberta just before the fire erupted.

For the workers supporting families, 55% of their income will not be enough to provide.

As a result of the ineffectiveness of these special measures, Luciano (MWA), in reference to the response of the federal and provincial governments, stated: “these are all band-aid solutions. The temporary foreign worker victims of the Fort McMurray tragedy put a magnifying glass on the broken system of the Temporary Foreign Worker Program. Thus, we continue to campaign for permanent residency upon arrival”.

CMWC also calls for the removal of restriction hours required for EI so that all evacuees of Fort McMurray can have immediate income.

CMWC reported on the parliamentary review sessions of the Temporary Foreign Worker Program (TFWP) which started on May 11th. The review compromises six three-hour sessions in front of a parliamentary subcommittee, however migrant workers have been largely excluded from the process. Only four migrant workers have spoken to the subcommittee, and one caregiver was turned away on May 18.

In response, the CMWRC is calling for a comprehensive multi-ministry consultation with migrant workers at a time and place they can attend following these review sessions. The exclusion of the migrant workers from the parliamentary review points to bigger problems within Canada’s parliamentary system wherein decisions seem to continue to be made without consulting those directly impacted.

The CCR told Alternatives International that one of their member organisations in Edmonton, Catholic Social Services, has collaborated with Migrant Alberta (a grassroots Filipino migrants rights group) to organize a meeting of displaced migrant workers to ascertain their issues in order to advocate with the government for further emergency measures.