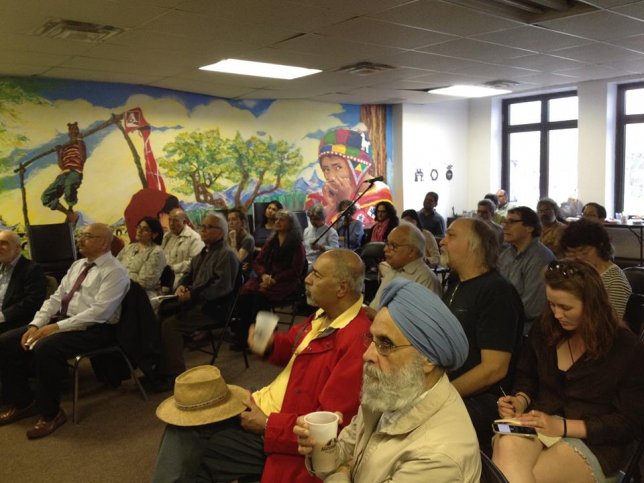 In the midst of the Legislative Assembly (Vidhan Sabha) elections in India, activist Noor Zaheer gave a talk at Alternatives on May 12 entitled ‘Nationalism and Intolerance in India Today’. Zaheer is a feminist, journalist, author, and militant activist who has long struggled for women’s equality, workers’ rights, and for a secular and socialist India.

During her talk, Zaheer expressed concerns about the rise of “fascist nationalism” promoted by the Sangh Parivar. The Sangh Parivar is the umbrella term used for the family of Hindu nationalist organizations in India, which includes the Bharatiya Janata Party (BJP) and other parties.

Zaheer noted that post-Independence India had moved toward strengthening democratic institutions. This trend has stagnated in the past 65 years. After Narendra Modi was elected as Prime Minister in 2014, Indian politics grew increasingly intolerant.

After Modi’s election, any criticism of the Modi government is interpreted as an attack on the nation. Violence carried out by Hindutva fringe groups has increased since Modi’s rise to power, and not only have there been attacks on Muslims, but there have also been violent attacks against proponents of secularism.

Most notable for Zaheer in the rise of fascist nationalism in India were the Gujarat riots of 2002. What was so big about 2002 and moving on from it?

In 2002, from February 27 through June, mass-scale killings of Muslims were carried out in Gujarat under the guise of Hindu-Muslim riots. Members of the BJP, under the leadership of Chief Minister Narendra Modi, were involved in promoting violent attacks on Muslims throughout this period in 2002. More than 2,000 Muslims were murdered in the riots.

According to scholar Paul Brass, all available evidence indicates that the Sangh Parivar planned, prepared, and promoted the brutal violence that was carried out against Muslims in 2002. By mid-April that year, there were nearly 150,000 Muslims in relief camps.

What has been most striking for Zaheer is that “there has been no sign of regret.” Rather, members of the BJP, Modi included, boast prideful attitudes about the attacks and the mass bloodshed of Muslims.

The BJP actively promotes the belief that India is essentially a Hindu Rashtra, a Hindu nation, and mocks the secular nature of the Indian constitution, leaving religious minorities incredibly vulnerable.

Amidst the intolerance and violence of the Modi government, however, Zaheer expressed a hopeful attitude for the future of Indian politics, as she has observed a decline in support for Modi. Zaheer recounted that even devout Hindus have expressed a desire to practice their religion freely. She recounts the popular sentiment: “I am a good Hindu, I love my religion, but I do not want anyone to tell me how to practice it”.

Resistance to the intolerance of the Modi government has not only come in the form of a shift in popular opinion, but also in the form of protests. Zaheer expressed her support for the student hunger strike at Jawaharlal Nehru University (JNU).

According to Zaheer, the student hunger strike has been more than just a student movement. The JNU students have been supported by their educators, and this support has expanded beyond the university gates.

On May Day, Zaheer witnessed how the contract workers of JNU—involved in their own struggle—ended their demonstration by joining in solidarity with the students on hunger strike at Freedom Square. Zaheer recounted that the workers stated, “the students have always stood by us, it is time now that we stand by them”.

In Kerala, Hindu, Muslim, and Christian women also united together in order to gain political representation, after both their trade union and their company failed to address grievances of sexual harassment in the workplace and poor working conditions. Employees of Kaylan Silks in Kerala banded together in order to gain the right to sit and to be given toilet breaks during their 10-12 hour long shifts.

In another powerful movement in Kerala, 6, 000 women from lower-caste backgrounds united under the name “Pempilai Orumai” or “Women’s Unity” and took to the streets to protest the poor working conditions they experience. After a nine-day protest, the women won their rights to bring their 20% bonus back.

These movements demonstrate the capacity for women to mobilize without the support of trade unions and how religious difference cannot stop people from unifying behind a common cause.

This resistance and unity demonstrated by these movements have occurred despite the repression of the Modi government and its attempts to divide Indian society along religious lines. For the upcoming elections, it is important to question the BJP’s 31% majority and struggle to challenge it.

So far, the elections in Assam, Kerala, Tamil Nadu, and West Bengal have revealed staggering support for the BJP, except in Assam where the BJP won a total of 86 seats. Despite boasting a majority, the stronghold of the BJP seems to be in the midst of losing its grip.

However, Zaheer expressed her simultaneous hope and concern if the BJP continues to lose seats. She noted that in the wake of loses in Bihar and Delhi, there have been surges of violence. Will there be more organized violence to attack minorities in the aftermath of the BJP’s probable losses in the upcoming elections? As Zaheer stated, “This is not a government that when it loses an election will go away quietly”.

According to Zaheer, the response must be a united challenge to fascism. Little unions must be formed wherever there is support, in order to work towards defeat the Modi in the 2019 general elections. There must be more grassroots movements like those of the students, workers, and women, in order to lead organized parties on the Left into a position that not only represents the people without repression, but defeats the fascist nationalism of the Sangh Parivar. The battle that India faces is not between temples and mosques, but it is the fight between democracy and fascism.