Home > English > Alternatives International Journal > 2015 > May 2015 > Colonialism and Austerity: The Crisis of Missing and Murdered Indigenous (...) 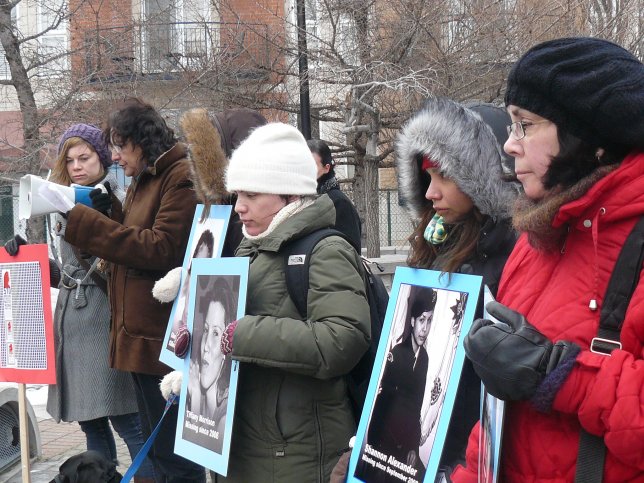 Colonialism and Austerity: The Crisis of Missing and Murdered Indigenous Women in Canada

The situation of missing and murdered indigenous women in Canada, Harper’s failure to respond to demands for a national inquiry into the issue, and intensifying federal and provincial austerity measures amount to a violent crisis that will not be resolved until Canada addresses its colonial reality.

In May 2014, the RCMP reported that the number of homicides and missing person’s cases involving indigenous women totaled 1,181 between 1980 and 2012. Although this statistic is higher than previously estimated figures, it is contested as under-representative due to the 32 year long period of review, the hundreds of unreported cases, and inconsistency in data collection. Underlying these statistical errors, however, is an oppressive system of colonial violence. The RCMP’s report lists intoxicants, involvement in the sex trade, and unemployment as defining characteristics of the cases. However, the report does not address the colonial policies that led to unemployment, impoverishment, and alcohol dependence in indigenous communities. Such laws and programmes include: the Indian Act, the residential schools system, the (mis)management of reserve lands, and the bifurcation of jurisdiction whereby the federal government is responsible for the provision of services to populations ‘on reserve’ and the provincial government to those ‘off reserve’. These colonial policies continue to plague indigenous communities, and until they are addressed, any attempt to mitigate the crisis through superficial short-term measures will remain inadequate.

Indigenous women and girls are three to four times likely to be murdered than their proportion of the population. The thousands of homicides and missing people’s cases involving indigenous women have been neglected by police forces, received insufficient media attention, and are categorically ignored by the government. A large percentage of the cases occurred in British Columbia along the so-called Highway of Tears, or Highway 16, which stretches between Prince George and Prince Rupert in Northern British Columbia. Although indigenous women were repeatedly disappearing and being killed along the Highway of Tears for decades, it was the disappearance of 25 year-old Nicole Hoar on 21 June 2002 that drew widespread media attention and alerted the general public to the crisis. Indigenous communities expressed frustration at the unprecedented media coverage of Hoar’s disappearance; the RCMP often failed to respond to reports placed by indigenous families. However, since her disappearance, the British Columbia First Nation Leadership Council has demanded an inquiry into the cases, communities have mobilized to raise awareness through calls for direct action, and international organizations, including Amnesty International, have spoken against the crisis.

In the wake of Nicole Hoar’s disappearance, the organizations and attendees of the Highway of Tears Symposium produced a Recommendations Report that was sent to the provincial government. The report contained both long- and short-term suggestions for developing victim prevention, emergency planning and team response, victim family counseling, and community development programs. Long-term recommendations include breaking down barriers between the RCMP and indigenous communities, establishing counseling services, addressing inter-generational poverty, bettering transportation services, and increasing accessibility to essential health and social services. These long-term, preventative measures work in tandem with short-term recommendations that include: forbidding RCMP officers to drive by hitchhikers who meet the victim profiles, establishing a shuttle bus service, and building safe houses along the highway. The report emphasizes both the systemic (read: colonial) factors that created and perpetuate the crisis, and simultaneously provides concrete ways whereby the government and RCMP can begin to address the situation and, as such, Canada’s colonial reality. Neither the RCMP nor the provincial or federal government have undertaken the necessary steps to implement any of the recommendations.

In 2005, the RCMP took action, and created the E-PANA Task Force, which was the result of “E” Division Criminal Operations that ordered the review of several of the murders and disappearances along the Highway of Tears. Initially, the E-PANA Task Force was limited to nine investigations, and in 2007 the number of cases doubled to eighteen. Currently, E-PANA consists of thirteen homicide and five missing people’s cases that range from 1969 to 2006. Of the eighteen cases, there has only been one major breakthrough; the task force identified 16-year-old Colleen MacMillen’s murderer as Bobby Jack Fowler by linking his DNA to her case.

Despite problems with E-PANA that families of the victims have expressed, such as the limited number of cases the RCMP has taken on and the narrow criteria that the cases were required to meet, the E-PANA investigation is a crucial step for Canada. A formal police investigation into the murders demonstrates that the provincial government takes seriously the crisis and is committed to preventing future cases.

However, austerity measures in British Columbia have threatened the viability of the E-PANA investigation. This February, the Canadian Press reported that RCMP Deputy Commissioner Craig Callens, the commanding officer and highest-ranking member of the RCMP in British Columbia, sent a memo to the provincial government warning that budget cuts would undermine the E-PANA investigation. Callens states, “the termination of funding for project E-PANA would impair the ability to effectively conduct historical homicide investigations within (B.C.).” The E-PANA budget was slashed to $1.8-million in 2012-2013, down from approximately $5-million from previous years’ budgets. The 2014-2015 budget was slashed by $1.4-million, which effectively cut six officers from the task force and further constrained the investigation. At the height of the investigation, there were up to 70 officers on the task force. Currently, only 12 officers are assigned to E-PANA.

The impacts of austerity budgets on the provincial and federal levels are not limited to obstructing the E-PANA investigation. Cuts to health and social services affect indigenous communities who rely on public services directly. In an interview, the NDP’s public safety critic, Mike Farnworth, remarked "I think it’s pretty awful that, given how high profile the Highway of Tears has been, how high profile the issue around the number of murdered and missing aboriginal women in this province has been, that we would see cuts like this," He continued, "they made these cuts at the same time they’re trying to say, ’We take the issue seriously.’” In an interview with the Globe and Mail, Mary Teegee, executive director of Carrier-Sekani Family Services, the host agency for the Highway of Tears Initiative on Safety, stated “austerity is not, in some cases, the most important bottom line. We’re dealing with human beings here.”

Austerity and colonialism go hand in hand, and slashing the budget for the E-PANA investigation is a drastic example of Canada’s continued oppression of indigenous communities. Neither the provincial nor federal government have adequately addressed the relationship between austerity and the crisis. In an interview, Matt Smiley, the director and producer of documentary Highway of Tears (2014), stated that austerity measures are “a definite blow, because they show that this issue is not a priority at all for the government.” In a statement issued to The Globe and Mail in December 2014, Harper stated, “we have dozens of reports on this phenomenon, including pretty comprehensive reports from the RCMP, and others, on the nature of the crimes involved.” Harper’s apathetic refusal to initiate a federal inquiry demonstrates Canada’s failure to confront its colonial reality.

The E-PANA investigation initially aimed to determine if a serial killer was responsible for the murders and disappearances along the Highway of Tears. The officers on the investigation quickly ruled out this possibility, however, they missed one suspect: the Canadian government. Until the government holds itself responsible for the system of colonial violence that underlies the murders, these cases will never be closed.