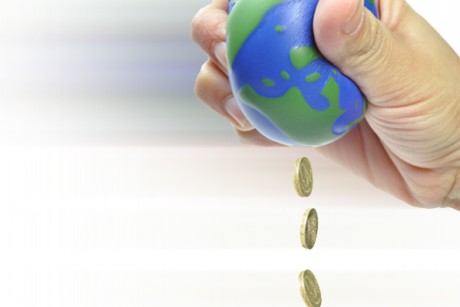 The unfortunately named grexit looms unenviably. Caught between the hardline dictates of the IMF Managing Director Christine Lagarde and the uncertain plans of Prime Minister Alexis Tsipras and the the Syriza party, Greece stands alert for a moment of national default and international intrigue. A bankrupt first-world nation obviously carries historical import, but the subtle predatory quality to which other Europeans powers inverted Greek debt should draw special attention. The IMF has never had to cannibalize one of its own.

The drastic predictions of Greek Eurozone withdrawal were not so recently guaranteed. A New Yorker profile written by Anand Gopal shortly after the Syriza electoral victory described a vaguely hopeful, if overwhelmed, political ecosystem. Full government cooperation with strict austerity measures had been defeated - or at least stalled. The problematic history of rampant corruption and tax evasion would no longer continue - at least at such ridiculous levels. While not wholly pyrrhic, the Syriza victory was one of contingencies and momentary reprieves.

Gopal’s piece covers a myriad of national and local efforts to combat the economic ills of a failing economy further impeded by massive cuts to social spending. Ranging from bread-lines to various volunteer and support positions for unemployed Greeks to anti-Fascist flyering, groundswells of community organization looked to inspire and involve the wide base of citizens affected by economic collapse. Such bottom up strategies clearly failed the strict IMF policies of limited social spending, along with defying even normative approaches to economic reinvigoration. Openly unsustainable creations, the communal plans, as described by Solidarity for All’s Christos Giavanopoulos, were “laboratories for reimagining how to meet people’s needs.” Such egalitarian tactics to combat austerity clearly ran contrary to the financial strictures of Eurozone debt repayment.

Not with an aim to infantilize, the laboratory quickly becomes a sandbox with the IMF playing the role of the domineering, destructive toddler. Instead of portioning off the play-area and sanctioning the novel and unconventional broad base tactics Gopal’s piece outlined, the IMF simply asked for Greek lunch money with interest. Detailed within a Guardian article compiled merely two weeks after Gopal’s optimistic evaluation, Lagarde and the rest of the European financial sector clamored for sensible (that is, conservative) political and economic reforms. Rebuttals by Syriza that threw away earlier plans to “privatise state assets and cut welfare” now leave Greece at the mercy of loan repayment extensions for 2010 and 2012 Eurozone bailout plans. Faced with a chance default on May welfare payments, Syriza and the Greek economy face an unwavering opponent in Lagarde’s IMF.

Friendly – and Western European – nation or not, economic sympathy does not appear likely for Greece, as the IMF has maintained its traditional rigidity against debt readjustment. Choice Lagarde quotations belie strict adherence to the rules while covering a particular interest in recapitalizing European foreign banking investments. While “[p]ayment delays have not been granted … in the last 30 years,” the major reason stems from the owners of the Greek bailout debt – namely the European Comission and European Central Bank amongst other continental financial institutions – demanding a return on the capital invested to maintain the rudiments of Greek society without an actual concern for the citizenry affected by austerity practices. When Lagarde tasks the Greek political system with “improving short and medium-term economic prospects,” the implied rapidity disregards the potential solvency of ideas from Solidarity for All and other communal efforts to redistribute the brunt of Greece’s economic trauma. Carnivorous in its demands for repayment, the IMF buffers its resolve through other member nations’ simplified defenses of near-exploitation masked as lending.

There is no support for a Greek loan extension. German Finance Minister Wolfgang Schäuble, again detailed in the Guardian, was quick to refute new payment packages from his Greek counterpart as lacking in substantive planning. Chief IMF economist Olivier Blanchard went further, claiming that the Eurozone could survive a potential grexit with careful maneuvering. Forced into a defensive stance, Greek Finance Minister Yanis Varoufakis walked back various claims and “informal approach[es]” that he had requested a delayed repayment schedule. Apparently full of disinterest, financial bloodlust, or both, the remainder of stable Western Europe seems content to dash the experiment of Leftist Greek anti-austerity politics.

Almost haunted, unseen and unspoken narratives dominate the future of Greece’s economic plight. Apparitions, taking the form of major European financial interests, inform the hardline IMF tactics more than actual economic forecasting. The old specters of Greek corruption problematize any formal or informal requests for leniency. Austerity presupposes the historical consciousness of the IMF, where loan schedules are stolid and Greek financial policies endemic with corruption, regardless of new leadership. The static nature of limited spending seems extended to the potential for change. Most troublingly, as Gopal observed in even the more optimistic portions of unemployed Greece, the alarming shadow of fascism and the Golden Dawn trails the grexit. While ghosts may not exist, invisibility does not refute the suspect motives of the IMF nor the disastrous consequences that live in close proximity to Greek economic instability. There may even be a worse fate than disappearing, embodied by the more classic, recognizable evils empowered when all other economic and political opportunities are dashed.