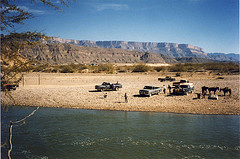 A first person review on customs and immigration in the Americas

"We went through the same routine at the El Salvador border, and since there were a few other buses travelling the same route I met a tourist from Iceland who was on a volunteer mission. He ran into trouble when the customs official didn’t believe that Iceland was a real country."

It was a hot and muggy day in San Jose, Costa Rica and I was waiting for the bus to Mexico. I had a return ticket to Canada leaving from Mexico City. There was only one other North American on the bus, a journalist named George, who said he was working for an English language weekly newspaper based in Mexico City. He had been covering the 2006 Costa Rican presidential election.

“Can’t wait to get back to Mexico, you know you and I, we’re probably the only two guys on this bus with a chance in life. Look around you; half of these guys are going to die in the desert, they want a better life. Americans like us, I mean me,” he laughed, “You’re Canadian I forgot. Well anyway we were both pretty damn lucky to have been born north of the Rio Grande, I’ll say that much.”

I looked around and saw what he meant, men and women in their early twenties with sombre looks on their faces. A couple of them looked over at us, having noticed that we were speaking English. My new friend was right. They were heading for the Mexican/American border. Once there they would find a guide or “Coyote” to whom they would pay a fee in exchange for passage into the United States. This was only the first part of their journey, and it was by far the easier part.

The first border we crossed was the Costa Rica/Nicaragua border. I knew the routine and it wasn’t much of a hassle, the bus stopped overnight in Managua I visited my father and had a drink with a friend. The bus left in the evening of the next day for Honduras.

At the Honduran border I showed my documents to the customs official and he smiled “I have a cousin in Canada, don’t worry about anything” and he ushered me past the caged German shepherd which snarled at every passenger who walked by. “That dog is there to sniff for cocaine, George told me, if it stops at you, you get some extra attention.” He pointed at a cement cell behind the grimacing dog.

We went through the same routine at the El Salvador border, and since there were a few other buses travelling the same route I met a tourist from Iceland who was on a volunteer mission. He ran into trouble when the customs official didn’t believe that Iceland was a real country. The customs official suspected the passport was a fake and gave the Icelander an amused look while scrutinizing his documents “You think you’re funny Gringo? Just show me your American passport and you’ll save us both a lot of time.” Finally the man was shown a map, Iceland was found and the only Icelander in El Salvador was given a Visa.

Crossing from El Salvador into Guatemala was surprisingly trouble free, but the lines at customs were noticeably longer. “Closer to Mexico, closer to North America” I thought. Once in Guatemala things changed drastically and the bus was stopped several times by police checking our papers. They checked at random based on who they thought looked like an illegal. I was asked for my passport once and the policeman laughed “not what I expected” he said in Spanish, “You look more Cuban than Canadian to me.” The man sitting next to me explained that there were a lot of Cubans trying to get into Mexico and the U.S through Guatemala. In Guatemala City we were joined by a young French couple who seemed terrified of me until I spoke to them in French. George made fun of them for this the entire way, “You never can be too careful with these Latino looking Canadians,” he warned mockingly.

We arrived at the Mexico, Guatemala border at night. Men were standing around the cement compound in cowboy hats smoking. Directly inside the building there was a sign in Spanish “Please leave your guns here” and a follow up sign reading “no guns past this point.” George assured me that their guns would be returned on the other side of the border. “They bring the guns through separately, check them and give them back on the other side.” The sign might as well read, “Have Gun Will Travel.” Everyone who looked like tourists were escorted through customs by two armed Mexican guards who looked worried about our safety, our bags were opened and closed as a matter of protocol and our passports stamped.

It was a long day on the bus between the border and Mexico City; I was checked a few times for my papers, eliciting the same bemused reaction from police officers. Upon arrival I saw a few of my fellow passengers get onto the backs of pickup trucks and drive away. On their way to find a trail to the United States, a younger woman came up to me and said “I will see you in your country one day, I don’t care how many times I have to try, it is my only hope.”

I wanted to warn her about the coyotes, tell her that they were more likely to leave her in the desert alone than guide her safely to the U.S. I wanted to tell her that even if she made it, without papers she would be treated as a second-class citizen. But she already knew all this.

After three days in Mexico City I got on a plane headed for GW Bush international airport in Houston Texas. The plane landed and I stood in the airport at the back of a long line waiting to go through customs, talking to a Mexican couple who were going to Miami on business.

A voice came over the loudspeaker, “All Canadians please move to the second line.” There were a total of six Canadians. We were ushered to a second line, created spontaneously on our behalf, and had our passports stamped. A friendly staff member apologized for any inconvenience. The other line didn’t look as comfortable.

Michael Bramadat-Willcock is a filmmaker and student journalist at Concordia University.