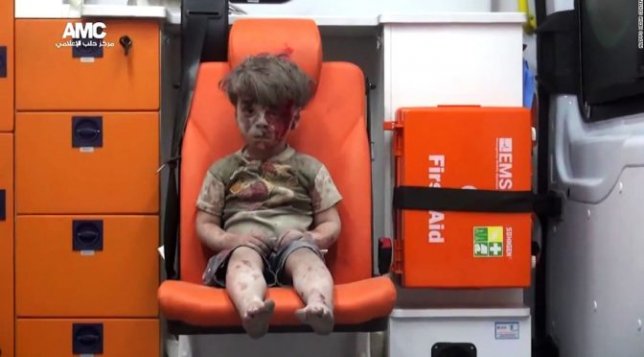 The ash-covered child seemed terrified. Omran Daqneesh was not crying as the medical worker carried him to the back of an ambulance. In shock, the boy was sitting on the orange chair. For weeks, Omran remains the face of Aleppo, unveiling the cruelty of the conflict in Syria and its impact on children. Omran also is the red warning light and the siren calling governments to help displaced Syrians and refugees around the world. I still notice people in my network sharing the video of Omran in the ambulance in Aleppo, marking the emergency and urgency of the situation in Syria.

At a time when governments and, sadly, activists are turning a blind eye to the crisis in Yemen, it is important to break the code of silence. The war has already happened and the conflict is ongoing, but what remain globally unheard of are the civilian causalities. What are the reasons behind the global code of silence on the conflict in Yemen? The graphic photos of injured and killed Yemeni children seem to be not enough to pierce the hearts of concerned international groups.

If the video of Aleppo’s Omran moved you, then the Saudi Arabia-led coalition attacks on schools in Yemen must be of a concern. Since 2015, Saudi Arabia has been leading a coalition of Arab nations raging a war against the Houthi rebel group. It does not matter which side of the conflict you take, schools are not military establishments. Neither are hospitals or people’s homes.

As of June 2016, UN reported that Saudi Arabia-led coalition was responsible for 60 per cent of child deaths and injuries in the Yemen conflict last year. Around 2,000 children were reportedly killed in 2015. The coalition is accused of carrying airstrikes indiscriminately. Last month, tens of children were killed and injured by an airstrike attacking a school in Sa’ada in Yemen. Photos that are far more graphic than Omran’s video have been circulated, but yet never trend globally on social media. Why is that the case?

I would assume that a number of Arab mainstream media outlets are either owned or financed by Saudi Arabia, Saudi corporations, or other Gulf governments that are part of the coalition. There must exist an incentive to not show the true picture of the conflict and the civilian causalities. Those are the same mainstream media outlets highlighting the deteriorating human rights situation in Syria— because it is politically safe and encouraged to do so.

On the other hand, Western media outlets are falling in the same trap. If Arab mainstream media benefits from the silence, what excuse does Western media have? If Omran’s video is going viral on my Facebook newsfeed, why do videos of Yemeni children killed, injured and displaced everyday not show up? This is a call to not only people of authority and the mainstream media, but to activists who campaign everyday on behalf of children in Syria and other parts of the world to pay an attention to the crisis in Yemen. There is no reason to be vocal about one issue while perpetuating silence on another.