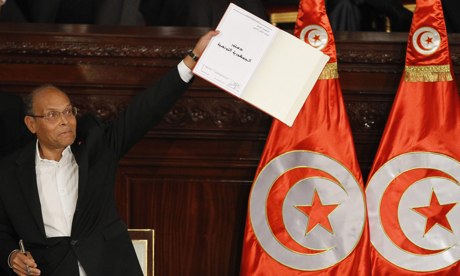 The New Constitution: The Text and the Old Biases

After a delay of fifteen months and intense controversies between Islamists on the one hand, and other liberal groups and civil society associations on the other, over several issues such as, the status of women, the place of Sharia and religion in the text, the National Constituent Assembly adopted the new constitution with an absolute majority of votes.

Such adoption has been welcomed by the majority of observers in and outside Tunisia. The new text will help put an end to dictatorship and reinforce the building up of democracy in a country that pioneered the Arab spring.

It upholds basic and civil rights, clarifies the relationship between the State and religion, guarantees the freedom of belief and conscience, the independence of the judiciary, the neutrality of the security system and the army. Also, the new constitution includes stronger protection for women’s rights, incorporating recommendations to ensure “equal opportunities between women and men “in all domains” and works to achieve gender parity in “elected assemblies.”

While welcoming this new constitution which contains clear language in favor of basic human rights, we would like to stress the following limits that would trample on certain rights:

• The new constitutional text does not contain solid provisions to protect ethnic and religious minorities;

• Despite calls from civil society and human rights groups, death penalty is not abolished;

• Some articles could give way to equivocal interpretation. Here, we are not only speaking of article one, where it is not clear whether Islam is the religion of the State or that of Tunisians but also, the ambiguity related to the prohibition of “attacks on the sacred”, a vague notion that does not define “the sacred” and could consequently, allow to sentence any criticism of religion;

• Contradiction still persists between the text and its application. Despite having clear articles that protect the right to publication and communication, freedom of conscience and the independence of the judiciary, the outgoing head of government issued a decree before his resignation, reintroducing the obligatory legal deposit of periodical and non-periodical publications. Jaber Mejri, accused of “mocking Islam” has been sentenced to seven and a half years in jail. And there is still a controversy between judges’ representative bodies and the executive authorities over the independence of the public prosecutor from the ministry of justice.

• International human rights instruments, once ratified, should be incorporated in domestic laws, and that in compliance with the principle of the primacy of international conventions over national laws. Unfortunately, this principle of primacy is not clearly entrenched in the new constitutional text, adopted lately by the National Constituent Assembly, since the international laws have a lower status than the Constitution.

Definitely, the new constitution is an important step towards strengthening democracy but, it would be ineffective if it does not go hand in hand with effective tools that would implement it. Tunisians still have in mind the 1959 constitution and how it was tailored through several amendments to secure dictatorship and the hegemony of the ruling party.

It belongs to the vibrant civil society, democratic forces and activists who followed closely the genesis of the different drafts and who exerted pressure on the Constituent Assembly so that the text complies with the requirements of democracy and human rights, to make sure that these rights are protected and no-one could turn the clock back on them.