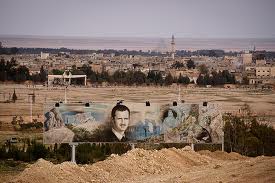 Exhausting Means of Resolution in Syria

Many were relieved when Western powers relented in their haste to intervene militarily in Syria back in September 2013. It was a chemical attack just outside of Damascus that served as the tipping point that threatened Western intervention, though such action was ultimately averted by Syria agreeing to establish a timetable through which it would eventually surrender its chemical arsenal. Since then the process to rid the country of its chemical weapons has evolved relatively slowly, though at a pace that is seemingly quicker than any progress being made at the conferences dedicated to negotiating a solution to the Syrian conflict.

Any option to resolve conflict by way of Western military intervention is usually met with suspicion of ulterior motives and misrepresented interests. This suspicion goes beyond the context of halting violence through violence; it also considers the post-conflict situation and a subsequent Western approach to state rebuilding that often lacks inclusion of those most affected by a given conflict. In the case of Syria, one of the arguments against intervention has been that Syrian problems demand Syrian solutions, and that the revolution must remain a Syrian revolution or it risks being watered down.

But with a death toll that now exceeds 140 000 people and recent reports warning that Syrians are on the verge of replacing Afghans as the world’s largest refugee population, the situation is frustrating, and something that can yield concrete results must be done. One cannot help but wonder if the human security situation in Syria would be better off by now if the West went through with its plans for intervention. Perhaps, but intervening poses many more potential complex consequences than just affecting human security, which is why the West’s decision to hold back was probably the right one.

Still, the numbers associated with violent war keep rising and the ability for Syrians to lead a life of dignity continues to decline. Surely there is more in terms of alternatives to military intervention than agreeing on the disposal of chemical weapons. The international community has a ‘responsibility to protect’ mechanism that uses various principles to determine when it should intervene in a state that cannot or refuses to protect its citizens. While it is clear that the leadership in Syria refuses to assume responsibility for the well being of its own citizens, one of the principles of the responsibility to protect mechanism is that all other means of resolution must be exhausted before intervention can be considered a legitimate option.

Coming to terms with the Syrian capacity to use chemical weapons on its own people – while important – does not reflect an exhaustion of other means of conflict resolution. Agreeing to set up talks and encourage negotiation is much of the same. Exhausting implies the complete draining of something, approaching something from every possible angle.

The Geneva II peace conference on Syria that began this past January provides a good context for resolving the Syrian conflict, but it still doesn’t reflect exhausting all means of resolution. The conference has been looked upon with a great deal of skepticism in terms of the prospective progress it can achieve. This is due to several important reasons that point to why the diplomacy avenue is not being exhausted. Firstly, there is no legitimate representative of the Syrian people within the Geneva II talks; the Syrian opposition does not adequately reflect the views of all Syrians that are opposed to the current regime. Secondly, the Syrian regime has sent diplomats, none of who are in any position to make executive decisions on behalf of the leadership. Thirdly, Iran (who was invited and then disinvited to the Geneva II conference) is not taking part, and should be considering its role in the region and its relationship with Syria.

Making space for a conference which tasks itself with resolution is a step in the right direction, but excluding the very actors that tangible resolution depends on makes the Geneva II talks a step sideways if anything. As many people - including Roger Mac Guinty - have reiterated, you negotiate peace with your enemies and not with your friends. Syrians depend on exhausting all means for resolution, and these words would serve every actor claiming their determination to peace in Syria well. Military intervention remains an unsustainable route to ending the conflict in Syria, but it will continue to be considered until all other means of resolution are genuinely exhausted. If the alternatives are genuinely considered and decisions are inclusive, then a peaceful end to the conflict may be possible, and a standard will have been set with which to approach other difficult conflicts.