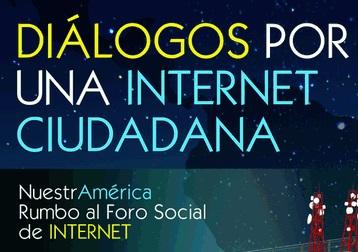 The Challenge to Rebuild a People’s Internet

It is already hard to imagine daily life without the innovations of the so-called digital technological “revolution” in spite of the fact that most of these innovations have proliferated over just one or two decades. How could we get along without mobile phones, without digital social networks or e-mail, without being able to search for information or do official or business procedures over the internet? Nevertheless, these are only the first steps of this transformation.

According to the technological utopia that big business promises us, very soon we will be able to make purchases with our mobile so a drone can deliver them to our home; we could have a self-parking car, or a robot that cleans the house and warns us if thieves break in. This supposed utopia comes hand-in-hand with a darker side: that of unlimited surveillance, vulnerable security, indiscriminate collection of personal data that further enriches mega-enterprises, massive loss of jobs through robots and automation, or the non-transparent algorithms — not always efficient or equitable —, that are ruling ever more aspects of our societies.

The fact is that in recent years, as more aspects of social and personal activity are digitalized, a good part of these innovations have been taken over by large monopolies (most of them from the United States), leading to an unprecedented concentration of power. Evidence of this is the fact that, according to the Bloomberg agency, in December of 2015, five of the 10 corporations with the highest stock-market value come from the technological sector; moreover, Apple, Alphabet/Google and Microsoft occupy the three first places, displacing the transnational oil companies.

At the same time, this consumerist utopia is very different from the one that characterized the beginnings of the Internet. Once it moved beyond its military origins, the network of networks was to a large extent developed as a collaborative initiative, controlled and designed mainly by civil society actors and academic sectors that conceived it under principals of democratization, horizontality and the free exchange of knowledge. In many areas, this focus has continued to be developed, with initiatives such as free software, open content and public platforms of interchange of knowledge and ideas. But as the Internet has gained in massiveness, it has become a terrain where the formerly public and self-managed spaces are now fenced in by private platforms, such as digital social networks, subject to the rules and algorithms imposed by Facebook, Twitter and the like.

In synthesis, one could say that there exists a central contradiction between two visions in dispute with respect to the Internet and digital technologies: on the one hand, a vision centred on the commons, on technological sovereignty, on the development of decentralized initiatives, with the defence of the public interest and the rights of citizens as key principles; and on the other, a project now underway of monopolistic concentration of technology, of spaces and platforms, of data and systems, oriented towards profit and the centralization of power. In a word, a people’s Internet vs. a corporate Internet.

Gaps in legislation and supervision favour the powerful

Last March 12th, Tim Berners-Lee, the founder of the Web, celebrating the 28th anniversary of the day on which he sent his initial proposal for a worldwide information network, published a message pointing to three present challenges of the Web. He recalls that he originally “imagined the web as an open platform that would allow everyone, everywhere to share information, access opportunities and collaborate across geographic and cultural boundaries.” He recognizes that “in many ways, the web has lived up to this vision, though it has been a recurring battle to keep it open.” Nevertheless, he indicates that over the past 12 months, “I’ve become increasingly worried about three new trends, which I believe we must tackle in order for the web to fulfill its true potential as a tool which serves all of humanity.” These are: the loss of control of personal data; the growing ease with which misinformation and ‘fake news’ spreads on the web, and the fact that political advertising on line, that demands transparency and understanding, has rapidly become a sophisticated industry.

In our understanding, the problems signalled by Berners-Lee implicitly point to this same concentration of power in the sector. Indeed, among the solutions that he poses is the need to work with the web companies to find a balance that, based on criteria of justice, gives people back a degree of control over their information; and the struggle against legislation that gives governments excessive surveillance powers. He encourages the “gatekeepers”, such as Google and Facebook, to combat the problem of fake news, while avoiding the creation of any central organ that could decide what is “true” or not. He also demands “more algorithmic transparency to understand how important decisions that affect our lives are being made, and perhaps a set of common principles to be followed”; and greater regulation of political campaigns.

Nevertheless, the risks of this model of concentrated digital technologies go way beyond what we now know as the Internet. In numerous sectors of the economy and political-social administration, internal changes are taking place – often barely visible – facilitated by the aggregation and analysis of data (what is known as big data). One problem is that, in general, only the very big entities (transnational corporations, powerful governments) have the capacity to gather and process such large quantities of data and transform them into algorithms, the basis of artificial intelligence.

It is estimated, for example, that the sophisticated algorithms that have been employed in recent years on Wall Street facilitated the mortgage bubble that unleashed the crisis of 2008 [1], since they allow for a speed and volume of transactions that was not possible with traditional methods; since then, their speed has increased exponentially, with the potential that a programming error or a malicious act could provoke a financial meltdown [2]. Another example: with the growth of cities that are constantly becoming more complex, many aspects of management can be resolved with these technologies (traffic flows, electric grid, etc.). But when technology packages are hired from – usually foreign – private companies, that privatize data from the city to feed their patented algorithms under their own criteria, a problem of democratic management arises, with potential human rights implications.

Our legal and regulatory systems have not been able to keep up to speed with these changes. Moreover, in the case international systems, there is no entity with the authority to establish norms for many aspects of data flow, and much less to oversee them. The new digital monopolies are exploiting this regulatory and supervisory gap to consolidate even more power, often putting their own interests above the public interest. Meanwhile, behind closed doors they negotiate the regulations that will decide the future of the net, with little real possibility influence by the citizenry.

Given the urgency of opening a broad public debate on these issues, a group of social and civic organizations has announced the organization of an Internet Social Forum (ISF), with the character of a thematic forum of the World Social Forum process. The ISF proposes to connect concepts, proposals and alternatives, which people and social organizations can identify with and meet around, with a view to developing the proposal of a people’s Internet.

The ISF is being planned to take place in Hyderabad, India, in late 2017 or early 2018. But there is no need to wait for this date to broaden and deepen the debate. Within the Latin American region, an initiative is underway to promote an exchange that helps to identify what is at stake in our region in various fields and for different social sectors, with a view to establishing a common agenda. One moment of this process will be the meeting Dialogues for a People’s Internet: “Our America” towards the Internet Social Forum, to take place in Quito on June 28-30 [3], for which a previous process of online interchange has begun.

As the call for the event says: “Internet represents a powerful transforming force for our societies in their multiple spheres. This new technology can be extremely useful for solving many of the problems humanity faces today; but only if its development is oriented by a concerted social and political endeavor in benefit of the broadest public interest.” It is an urgent challenge for our societies to rescue the people’s Internet, before it is too late.

(Translated for ALAI by Jordan Bishop)

- Sally Burch is a journalist with ALAI and a member of the coordinating group of the Internet Social Forum. 20/03/2017