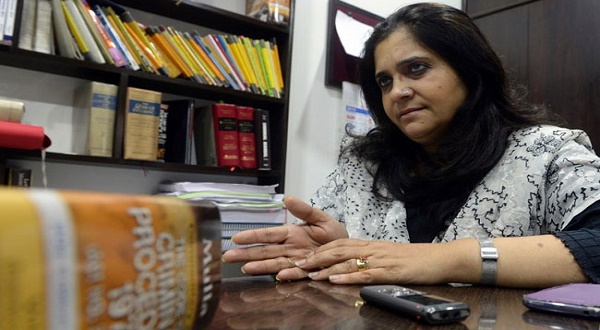 NEW DELHI – Eminent rights activist and journalist Teesta Setalvad raised the issue of worsening human rights situation in India at the UN Human Rights Council in Geneva. One of India’s most recognized activists and a strident voice against hate and sectarianism, Setalvad’s speech was part of a larger effort by the Indian American Muslim Council (IAMC) and its partner organizations that includes a joint submission to the UN Human Rights Council for India’s Universal Periodic Review (UPR) scheduled for May 4, 2017. IAMC has also made a separate joint submission with Ms.Setalvad’s organization “Citizens for Justice and Peace,” for the same UPR.

Her brief testimony was before a full session of the UN Human Rights Council, with all the UN member countries in attendance, convened to review the report of the UN Rapporteur on Minority Rights.

Ms. Setalvad noted that since the UN Special Rapporteur’s 2013 General Assembly report, the following developments have taken place in India:

1. Speeches by political leaders and members of Parliament had exacerbated the violence in Muzaffarnagar that claimed over 60 lives and left thousands homeless 2. The targeting of religious minorities accused of “improper” conversions from Hinduism 3. In the wake of state laws banning the sale of beef, mob attacks on people alleged to have beef in their possession have becoming a recurring event 4. The Special Rapporteur on extrajudicial or arbitrary executions noted that encounter killings “have become virtually a part of unofficial State policy” in India 5. The above acts are often committed with impunity stemming in part from close alignment between the government and non-state actors 6. Law enforcement agencies fabricate terrorism cases where Muslims are often targets

Ms. Setalvad went on to point that “progress in minority rights protection is under threat, including by hate speech, xenophobic rhetoric and incitement to hatred against minorities.”

She voiced the partner organizations’ position, joining the Special Rapporteur “in calling on UN Member States and the Human Rights Council to recognize that States bear the primary duty to protect the security of religious minorities with positive and preventive actions, through active engagement with religious minorities.”

“Ms. Teesta Setalvad’s testimony and the joint submissions of the partner organizations mark a turning point in international spotlight on the human rights situation in India”, said Ajit Sahi, noted journalist and Advocacy Director for the Indian American Muslim Council. Sahi, along with Jawad Khan, President of IAMC and Jennifer Presthold Vice President of AHR were also present at the Human Rights Council in Geneva.