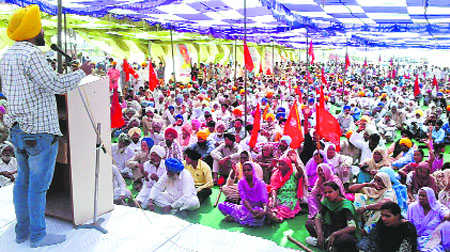 Punjab’s Dalits and Politics of Patronage

SUFI singer Hans Raj Hans joining the Bharatiya Janata Party does appear to be a surprise on the face of it. He was brought recently into the Congress party fold by Captain Amarinder Singh with fanfare. If we take a long-term historical and sociological look at Dalit politics in Punjab, it is not a surprise at all. It follows the usual pattern of accommodating leading Dalit figures into the State’s mainstream political parties. So far this process of accommodation had been confined to the two main historical contenders for hegemony in Punjab politics, that is the Shiromani Akali Dal (SAD) and the Indian National Congress. Now, the BJP has joined in. This process of accommodation seems to sit very uncomfortably with the sociological reality of the Dalits’ numerical space in Punjab’s population. The share of Dalits in Punjab population is higher than in any other state. The Dalits in some of the other states are more organised.

In Maharashtra, the imprint of B.R. Ambedkar in giving birth to the Dalit-oriented Republican Party of India is visible. Similarly, Kanshi Ram’s disciple Mayawati has made the Bahujan Samaj Party a powerful player in UP politics. Both Amdedkar and Kanshi Ram had a special relationship with Punjab. After Ambedkar realised that there was no possibility of Dalit liberation from caste hierarchy and the consequent oppression by remaining within the fold of Hindu religion, he thought of adopting and recommending to his followers Sikhism. This appeal of Sikhism for him was because theoretically, the Sikh religion in its theology was free from caste considerations. Also, it was indigenous to India, unlike Islam and Christianity. The latter were also caste free but were seen, in popular imagination, linked with origins outside India. Ambedkar came to Punjab to meet the Sikh leadership and got one of his close family members admitted to Khalsa College, Amritsar to enable him to get a first-hand experience of Sikh society.

He also commissioned a survey in Punjab villages, where Sikhism seemed to thrive to understand the nature of practical functioning of Sikh society. Ambedkar was highly disappointed. The upper caste (Khatri-Jat) Sikh leadership, instead of welcoming Ambedkar’s gesture of showing respect to the teachings of the Sikh gurus, felt threatened by the possibility of a huge number of Dalits entering the Sikh fold. His disappointment was reinforced by the results of his survey in rural Sikh society. It showed widespread practice of caste discrimination against the Dalits. Amdedkar then took refuge in Buddhism. A historical possibility of great potential was lost. Kanshi Ram was born in Punjab but instead of finding political success here, he found it in Uttar Pradesh. His successor Mayawati has converted the successful Dalit mobilisation into making the Dalit-based BSP one of the chief contenders for political power in UP.

The share of Dalits in the population of Maharashtra and UP is significantly less than that in Punjab. What distinguishes Punjab’s story of failed Dalit mobilisation from UP’s successful model and, to a lesser extent, from the Maharashtra model is the fractured nature of Dalit identity and consolidation in Punjab. There are internal differences within the Dalits in UP and Maharashtra too but these are nowhere close to the depth and scale of these internal cleavages among Punjabi Dalits. Punjabi Dalits are, at one level, fractured by Balmiki and Ravidassia differences which have religious tones. The Balmikis are considered close to the Hindus and the Ravidassias close to the Sikhs. There are problems in these perceived relationships too. Further, Ravidassias or chamars consider their main occupation (leather work) and the caste associated with this as superior to the main occupation (cleaning) and the caste associated with it, the Balmikis. Ravidassias, though considered close to Sikhism because the bani of Guru Ravi Das has the honour of being included in Guru Granth Sahib, ironically consider themselves superior to Mazhabi Sikhs. This is because of the perceived caste category with which the Mazhabi Sikhs are associated. Apart from these caste hierarchical cleavages between Ravidassias and Balmikis, the superior economic conditions of the former in comparison with the Balmikis further create tensions in building a unified Dalit identity and mobilisation. Ravidassias are educationally more advanced than the Balmikis. Due to this relative advantage, they are also more successful entrepreneurs and go abroad.

This superior economic condition of the Ravidassias is purely a regional dimension, and has nothing to do with their caste. They come from the Doaba region, while the Mazhabi Sikhs mostly come from the Malwa region. The Doaba region was historically more advanced educationally than Malwa. This enabled the people of Doaba region to be the first to take advantage of migration to the rich advanced countries in the West. The Jats of Doaba region were also historically more educated than the Jats of the Malwa region due to this regional differentiation which has nothing to do with caste.

The relative backwardness of Balmikis is seen by them as a result of the Ravidassias taking all the advantages of reservations. This perception further creates mistrust between these two major caste groups of the Dalits. The leadership of the two principal political parties in Punjab — SAD and Congress — have taken advantage of these inner differences within the Dalits though it is difficult to say whether they have consciously exacerbated them. They have used these differences to offer important party, legislative and government positions to the prominent members of these caste groups to advance their own political agendas. This accommodation mechanism, while placating the leaders of these oppressed caste groups, has acted as a dissipating factor in forging a common unified Dalit identity.

The Left leadership of Punjab has also failed the Dalits mainly because the Left has not recognised the debilitating character of caste oppression. It has tended to look upon caste as a hindrance to class solidarity. However, in practice caste and class are deeply enmeshed with each other.

One can only hope that the new generations of educated Dalits in Punjab are able to liberate themselves from the patronising accommodation that is tantalisingly thrown at them by the upper-caste leadership of mainstream political parties. They must work to resolve their inner cleavages and create the foundations for a genuine egalitarian politics in Punjab. The land of the Gurus demands nothing less than this.

The writer is Professor of Economics at Oxford Brookes University, UK