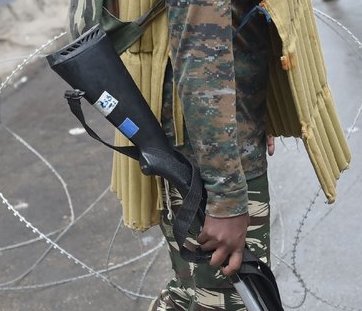 SRINAGAR, December 16: The Concerned Citizens’ Collective team that visited Kashmir from 12 to 16 December 2016, expressed deep dismay to observe that the people of the Kashmir valley have been entirely abandoned by their central and state governments, in this time of their great suffering. The only face of government that the people of the Valley encounter is of a repressive security establishment, they declared. There is no proportionality of state response as stone pelting is met by bullets and pellet guns. The high proportion of injuries on the face and above the waist demonstrate that there was official intention to shower hundreds of pellets on the agitated population, not to disperse but to kill or permanently disable.

This attitude of governments, both state and central, the members maintained, is even more regrettable because the large majority of the victims of the bullets and pellet guns are children, many of them so young that they could not have been part of any agitation. Even for those boys who were pelting stones, the response of a democratic state cannot be to disable them for life, or to kill them.

There is also no display of public compassion by the state government, which has failed to reach out to the children who are blinded and disabled, and their suffering families, many of whom are too frightened to seek medical treatment for fear of being criminalised. At the same time, the Committee greatly appreciated the doctors and public medical community, including in psychiatry and ophthalmology, who extended extraordinarily compassionate, even heroic, service and care to the victims of pellet and gun injuries.

The Committee was distressed to learn that many children are presently incarcerated in adult prisons. Others are detained in juvenile homes but without the protections of a comprehensive juvenile justice system which has not been established in J&K. Equally distressing is the finding that both children and adults are being detained under the draconian anti-democratic Public Security Act.

The Concerned Citizens’ Collective team, comprising Tapan Bose, Harsh Mander, Pamela Philipose, Dinesh Mohan and Navsharan Kaur met a wide range of the Kashmiri population over their four-day stay in Kashmir. They interacted with over 150 persons, ranging from children disabled by pellets and bullets and their caregivers, youth, women, older people, working people, farmers, doctors, human rights and civil society activists, journalists, traders, business leaders, writers, and villagers in Kulgam, Pulwama and Anantnag. This wide swathe of public opinion was nearly unanimous in expressing their anguish and alienation from the state. It was clear to the Committee this was no longer a movement of militants supported by Pakistan as is portrayed in the national media, but a broad-based movement of almost all sections of Kashmiri society.

A number of people who met the team members asked that if the Kashmiri people were indeed equal citizens of India, then why does the government and its security establishment use forms and levels of state violence in the Kashmir valley that they do not deploy in other parts of the country? Even more violent agitations in recent months, such as the Patel and Jat agitations and the protests against the sharing of Cauvery river waters have not been met with such lethal state response as in Kashmir. The Committee said it was opposed to the use of such force against the country’s people anywhere, and that it was deeply dismayed that this highly excessive use of force against Kashmiris reflects an attempt to crush their spirit and treat them as an enemy population. A large majority of people who met them also deplored the role of significant sections of the national media for purveying false and partisan information about the Kashmiri situation over the past months, contributing further to their sense of alienation.

The Concerned Citizens’ Committee expressed deep anguish at the suffering of those who they described as ‘our Kashmiri children, sisters and brothers at the hand of governments that are majoritarian, repressive and merciless’. The members observed that there is a sense of fear among minorities, liberals and the poor in other parts of India as well because of the same approach of the central government to its working people and to dissent.

They therefore stand in solidarity with all these people, and demand that pellet guns are banned forthwith. The Committee also demands that the leadership of both the central and state governments publicly express regret for their use on children and civilians; that peaceful dissent and stone pelting is met in future with democratic, proportionate and restrained response by the police and security personnel; that security personnel responsible for these excesses and violence are punished; that the state administration releases forthwith all children and youth and political prisoners; that it reaches out humanely with all support for treatment, rehabilitation, education and livelihoods of persons disabled because of bullets and pellets and their caregivers; and that a peaceful, just and humane atmosphere is created in the state to initiate political engagement and meaningful dialogue to address the widely held grievances of the people.