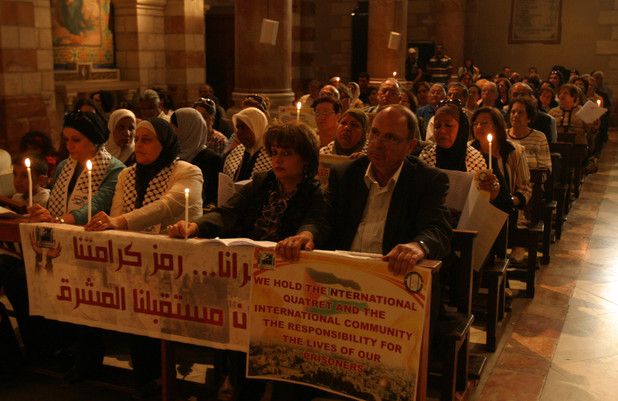 On 24 February, Israel’s parliament, the Knesset, approved a controversial law aimed at de-Arabizing Palestinian Christians. The new law identifies them as a non-Arab minority group.

The initiative is led by the extreme right-wing member of the Knesset (MK) Yariv Levinfrom the governing Likud party.

Some consider this to be only a small symbolic action but we in Baladna, the Association for Arab Youth, and in wider Palestinian civil society see this action as linked to a much larger and systematic process of “divide and conquer” as well as to attempts to destroy Palestinian identity among Arab Palestinian citizens of Israel.

In a recent interview, Levin laid the difference he perceived between “Christians” and “Muslim Arabs.” He refused to acknowledge Christians as Arab and said “I’m being careful about not calling them Arabs because they aren’t Arab.”

He described Christians as the “natural allies” of Israel and “a counterweight to the Muslims who want to destroy the country from within.”

Levin has pointed to non-existent genetic and ideological differences between Christians and Muslims in an attempt to impose sectarian identities over Palestinian identity. These legislative measures come in conjunction with a recent accelerated recruitment of Christians to military and civil service.

The legislation is part of a larger policy to fragment Palestinian identity.

Levin, supported by the governing Likud party, is advocating the approval of several laws and regulations that aim to distinguish Christians legally and practically.

The Druze underwent similar attempts to separate them from the remainder of the Palestinian community in the 1950s and 1960s.

Druze are an authentic and Arab part of this region. They have been a part of the social structure in the Greater Syria region (Palestine, Lebanon, Jordan and Syria) since the 10th century following the founding of the Druze religion in Egypt.

Druze, like most other Palestinian communities, traditionally relied primarily on agriculture and the community was severely affected by land confiscations following the founding of Israel in 1948.

Land confiscation limited the options available to maintain a livelihood so the Druze leadership looked to assimilation within the new state.

“Integration” in Israel was not unanimously decided upon by the community, as the Zionist narrative suggests. Rather, it was decided upon by a small number of Druze leaders.

Despite protests in many villages, Druze were conscripted into the Israeli military in 1956 and encouraged to be career soldiers and officers.

In 1957, Druze were recognized as a specific ethnic minority and an individualized school system and curriculum was developed. The curriculum perpetuates Druze identity as a separate nation and not only a religion.

This seems logical for a state which views its own religion as a nation. But it is necessary to emphasize that this is a foreign concept to the Middle East.

Nation-state based identity originated in Europe. Prior to the fall of the Ottoman empire, identity in the Middle East was localized with long histories of inter-religious cooperation in Damascus, Baghdad and Jerusalem — to name only a few.

In these last few years, we have witnessed an increased Druze resistance to military service and Israel has turned its attention to continuing the same process of annexation with the Christians.

Many recent articles have misleadingly said that Christians wish to integrate into Israeli society. Here, I would like to emphasize my usage of “annexation” and not “integration.”

This is because these laws separate Christian identity as different from Palestinian identity. Full integration into Israel for non-Jews is impossible.

It is possible for individuals to benefit from the short-term material rewards of incentivized conscription but this will never result in integration.

For example: in November 2013, several Druze soldiers (hailing from a community who have served mandatory service in the Israeli army for over fifty years) were for a time not allowed to enter the Dimona nuclear reactor because they were not Jewish.

In the last two years, Christians have been increasingly targeted for recruitment to the military through incentives such as money and promises of social welfare programs like education and employment.

The legislation recently passed by the Knesset — by 31 to six votes — explicitly distinguishes Christians and Muslims as separate groups.

The bill expands the public advisory council, which consists of representative groups promoting workers rights, from five members to ten.

The council will now include Christian, Muslim, Druze and Circassian representatives, despite the fact that all Arabs suffer from the same difficulties and discrimination in the workforce.

My organization Baladna is part of a coalition of groups — including some political parties — resisting this legislation.

Many from the 1948 community (Palestinian citizens of Israel) see that preserving our Palestinian identity is our main struggle. Unfortunately, as in neighboring countries, the Palestinian community has not been immune to the phenomenon of sectarianism.

Sectarianism is further provoked by the “divide and rule” policies of the state which refuse to recognize us as a single Palestinian minority, avoid police intervention in cases of violence against Arabs and consistently discriminates against us in many other ways.

Participating in a military that commits egregious crimes against our own people inGaza, the West Bank and inside Israel, will not improve the circumstance of Palestinians. Participating in the military apparatus fractures our identity and contributes to an immoral system that abuses the rights of our own people.

Participation will not even significantly benefit the lives of the individuals who chose to serve. Yes, the incentives may be appealing but do not confer the rights of full citizenship.

The rewards will be temporary and short-lived while the repercussions will be devastating to Palestinian society as a whole. We have already lost our homes and our lands; it is necessary that we maintain our Palestinian identity.

Luckily, we are not alone in our opinion. Very few individuals support so-called “Christian integration” and these individuals are loud and supported by the government and its security services. They certainly do not represent the Palestinian Christian community.

All Palestinians want the full realization of their rights. However, this system in which marginally more rights can be achieved by military service and acceptance of sectarian identity will never result in full rights for any of us.

Nadim Nashif is director of Baladna, the Association for Arab Youth.