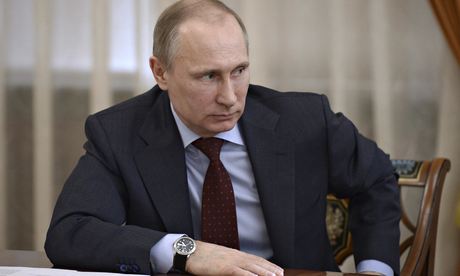 The US and UK condemn him for Crimea but supported him over the war in Chechnya. Why? Because now he refuses to play ball.

Once again, it seems that Russia and the United States are finding it difficult to agree on how to deal with their respective ambitions. This clash of interests is highlighted by the Ukrainian crisis. The provocation in this particular instance, as the leaked recording of a US diplomat, Victoria Nuland, saying "Fuck the EU" suggests, came from Washington.

Several decades ago, at the height of the cold war, George Kennan, a leading American foreign policy strategist invited to give the Reith Lectures, informed his audience: "There is, let me assure you, nothing in nature more egocentric than embattled democracy. It soon becomes the victim of its own propaganda. It then tends to attach to its own cause an absolute value which distorts its own vision … Its enemy becomes the embodiment of all evil. Its own side is the centre of all virtue."

And so it continues. Washington knows that Ukraine has always been a delicate issue for Moscow. The ultra-nationalists who fought with the Third Reich during the second world war killed 30,000 Russian soldiers and communists. They were still conducting a covert war with CIA backing as late as 1951. Pavel Sudoplatov, a Soviet intelligence chief, wrote in 1994: "The origins of the cold war are closely interwoven with western support for nationalist unrest in the Baltic areas and western Ukraine."

When Gorbachev agreed the deal on German reunification, the cornerstone of which was that united Germany could remain in Nato, US secretary of state Baker assured him that "there would be no extension of Nato’s jurisdiction one inch to the east". Gorbachev repeated: "Any extension of the zone of Nato is unacceptable." Baker’s response: "I agree." One reason Gorbachev has publicly supported Putin on theCrimea is that his trust in the west was so cruelly betrayed.

As long as Washington believed that Russian leaders would blindly do its bidding (which Yeltsin did blind drunk) it supported Moscow. Yeltsin’s attack on the Russian parliament in 1993 was justified in the western media. The wholesale assaults on Chechnya by Yeltsin and then by Putin were treated as a little local problem with support from George Bush and Tony Blair. "Chechnya isn’t Kosovo," said Blair after his meeting with Putin in 2000. Tony Wood’s book, Chechnya: The Case for Independence, provides chapter and verse of what the horrors that were inflicted on that country. Chechnya had enjoyed de facto independence from 1991-94. Its people had observed the speed with which the Baltic republics had been allowed independence and wanted the same for themselves.

Instead they were bombarded. Grozny, the capital, was virtually reduced to dust as 85 percent of its housing was destroyed. In February 1995 two courageous Russian economists, Andrey Illarionov and Boris Lvin published a text in Moscow News arguing in favour of Chechen independence and the paper (unlike its Western counterparts) also published some excellent critical reports that revealed atrocities on a huge scale, eclipsing the siege of Sarajevo and the massacre in Srebrenica. Rape, torture, homeless refugees and tens of thousands dead was the fate of the Chechens. No problem here for Washington and its EU allies.

In the calculus of western interests there is no suffering, whatever its scale, which cannot be justified. Chechens, Palestinians, Iraqis, Afghans, Pakistanis are of little importance. Nonetheless, the contrast between the west’s attitude to the Chechen war and Crimea is startling.

The Crimean affair led to barely any loss of life, and the population clearly wanted to be part of Russia. The White House’s reaction has been the opposite of its reaction to Chechnya. Why? Because Putin, unlike Yeltsin, is refusing to play ball any more on the things that matter such as Nato expansion, sanctions on Iran, Syria etc. As a result, he has become evil incarnate. And all this because he has decided to contest US hegemony by using the methods often deployed by the west. (France’s repeated incursions in Africa are but one example.)

If the US insists on using the Nato magnet to attract the Ukraine, it is likely that Moscow will detach the eastern part of the country. Those who really value Ukrainian sovereignty should opt for real independence and a positive neutrality: neither a plaything of the west nor Moscow.