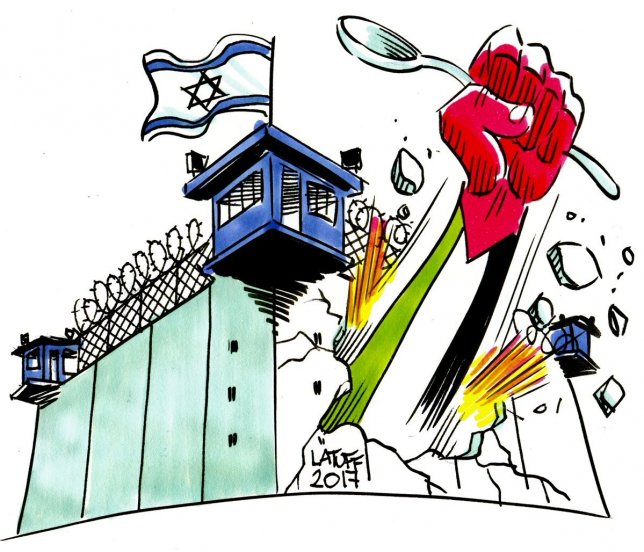 GAZA: After 40 days without food, hundreds of Palestinian prisoners have suspended their hunger strike in Israeli jails.

The end of the strike came after 20 hours of intense negotiations between the strike’s leaders, including imprisoned Fatah figure Marwan Barghouti, and the Israel Prison Service, according to a statement issued Saturday morning by the prisoners solidarity committee.

The committee hailed the agreement as a “victory for the Palestinian people and the prisoners in their epic defense of freedom and dignity.”

It added that Israel was forced to negotiate after realizing that the prisoners “were ready to continue until victory or martyrdom and that the use of oppression, violence and other violations failed to weaken them, but rather strengthened their resolve.”

The statement says Israeli authorities accepted some of the demands of the prisoners, but does not provide details.

However Israel Prison Service sources told the Ma’an News Agency that the agreement, reached between Israel, the International Committee of the Red Cross (ICRC), and the Palestinian Authority, would grant prisoners a second monthly family visit to be funded by the PA.

“The move effectively reinstated the number of family visits that were traditionally provided to Palestinian prisoners, before the ICRC reduced the number of visits they facilitated last year from two to one visit a month, sparking protests across the Palestinian territory,” according to Ma’an.

But the Israeli prison spokesperson reportedly “declined to comment on whether any of the other demands were met.”

Some 1,500 prisoners began their hunger strike on 17 April to demand improvements in conditions and an end to solitary confinement, heavy restrictions on family visits and administrative detention – prolonged imprisonment without charge.

They also called for Israel to ease restrictions on the entry of books, clothing, food and other items from family members.

Israel quickly resorted to harsh punitive measures in its effort to break the strike, including transferring prisoners between prisons, subjecting leaders to solitary confinement, blocking visits by lawyers and confiscating personal belongings.

As the strike continued and the health of many prisoners sharply deteriorated, Israel increased psychological pressure: media reports suggested Israel would resort to the dangerous and medically unethical practice of force-feeding and Israeli ministers publicly smeared Marwan Barghouti in an apparent effort to discredit him and break the strike’s unity.

By Friday night, 834 prisoners remained on hunger strike, according to the Tel Aviv newspaper Haaretz, and 18 remained hospitalized.

Activists in Palestine and around the world have organized solidarity actions with the hunger strikers. Many posted on social media about taking the “salt water challenge” – symbolically drinking only salty water, as the hunger strikers do, to raise awareness about their struggle.

The last mass hunger strike occurred in 2014, when hundreds of prisoners protested the use of administrative detention. Before and since, individuals have waged individual hunger strikes, in some cases reaching three months.

The end of this strike coincides with the beginning of Ramadan. Some prisoners had announced the intention to fast by refusing even salt and water during the hours of sunrise to sunset. This could have placed their already weakened bodies in even graver danger, and sharply increased pressure on Israel.

(Cover Photograph: Palestinians in Gaza City celebrate after hundreds of Palestinian political prisoners in Israeli jails suspended a 40-day hunger strike on 27 May. The end of the strike, which coincides with the start of Ramadan, came after marathon negotiations between Israeli prison authorities and strike leaders. Ashraf AmraAPA images)