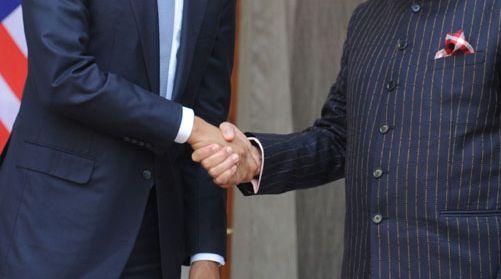 India inhabits a complex part of the geopolitical map, where the simple binaries of us and them break down, especially for the US

The sole Indian journalist called on to address a question to US President Barack Obama and Indian Prime Minister Narendra Modi, during their brief press availability in Delhi, chose rather to extend congratulations on the purported new beginnings in the bilateral relationship. The US news agency journalist who got a similar opportunity addressed Obama on the crises in Ukraine and Yemen, and sought clarity from Modi on India’s climate change position.

Modi responded briefly and in accordance with a practised template about India’s commitment to future generations. And Obama chose to poke irony in the eye — the US had no intent to see Russia weakened, but would nonetheless uphold the “core principle that large countries don’t bully smaller countries”.

India was among many holdouts when the US orchestrated global sanctions against Russia after a colour-coded revolution to bring down an elected government in Ukraine ended in insurrectionary conditions and the Crimean secession. The reasons would have been clear the day after Obama’s brief encounter with the press. Aside from a newly acquired naval reconnaissance aircraft of US origin and a few transport aircraft, most of the hardware on display at the annual military pageant of the republic, he would have noted, was sourced from Russia.

According to a recent reckoning by the Stockholm International Peace Research Institute (SIPRI), India was the world’s largest arms importer in the four-year period ending 2013. With a share of about 14 per cent in all international transfers of military equipment, India was far ahead of Pakistan and China, which tied for second place at 5 per cent each.

India affords a substantial arms market, which the US undoubtedly would be attracted to as its economic fortunes falter. But domestic law in the US imposes a number of hurdles, including a formal requirement that all arms transacted should be used only in legitimate self-defence. This is, of course, a malleable principle. The State of Israel has been a recipient of US generosity despite its military occupation of Palestinian territories, which has nothing to do with self-defence, except in the most perverse reading.

India inhabits a more complex part of the geopolitical map, where the simple binaries of us and them break down. Bringing peace and order to Afghanistan is a US priority, and Pakistan, a vital accessory in the mission. Too strong a tilt towards India, and a heightened military relationship, would sour ties with Pakistan and potentially endanger an already delicate transition in Afghanistan.

China, yet another among India’s prickly neighbours, is among the US’s largest trading partners, with two-way transactions of $640 billion in 2014. With the balance running strongly in its favour, China currently sits on perhaps the largest stash of dollar assets outside the US Federal Reserve. Some of the consequences were recently evident in a cheque that China wrote to bail out Russia when its currency crumbled under the pressure of sanctions and an oil price collapse. The ability China retains to undermine US soft power is a factor in global geopolitics that cannot be ignored in the years ahead.

A vision statement adopted during Obama’s visit may suggest a new resolve in the exercise of hard power. Underlining the importance of secure sea-lanes in the Asia-Pacific and Indian Ocean, the statement spoke of “safeguarding maritime security and ensuring freedom of navigation and over-flight throughout the region, especially in the South China Sea”. All disputes in the region, it affirmed, should be settled through “peaceful means, in accordance with universally recognised principles of international law, including the United Nations Convention on the Law of the Sea”.

Here again was a challenge to irony, since the US is not a signatory to the law of the sea (or UNCLOS, as it is called). Expectedly, this clause in the vision statement brought forth a heated response from Beijing. There were no impediments to free movement through the South China Sea, it said, effectively asking the US and India to butt out of a conversation that was best carried out among the littoral states.

Since taking office, Modi has had three meetings with the political leadership of major littoral States of the Asia-Pacific and Indian Ocean regions — the Chinese President and the prime ministers of Australia and Japan. This is in conformity with the reading that this region is swiftly emerging as the new hub of global power. Yet it is a tricky geometry of power, and for all the euphoria around the Obama visit, there is still a degree of scepticism about how far India can negotiate these complexities as an overt ally of the US.

As Obama touched down, talking heads in the media were warning that the nuclear cooperation deal with the US, long touted as symbolic of the new engagement between the countries, was in danger of unravelling. It will undoubtedly be deemed a notable success of his visit that a salvage operation was carried out. Details are awaited, but the insurance fund of ₹1,500 crore created to indemnify US equipment suppliers in the event of nuclear accidents, is widely seen as pitifully meagre. And the Indian Attorney-General’s opinion on how best to exempt US corporations from the law that empowers groups and individuals to file tort claims is still awaited. The legal opinion, when it comes, will certainly be contested. That could be embarrassing for the BJP, which insisted when in the Opposition for the inclusion of strong corporate liability clauses in the law.

Nuclear cooperation is one among many tortuous acts within the slow-moving tableau of India’s engagement with the US. Despite claims that the logjam has now been cleared, those familiar with the terrain are holding off on celebrations. Given the convolutions of the larger picture, it has been useful to focus on the nuclear domain as representative of the whole. A weapons system that will never be used and an energy source that today contributes just over 2 per cent to India’s electricity mix have, in this manner, come to represent the entirety of India’s engagement with the US.

(Sukumar Muralidharan is a fellow at the Indian Institute of Advanced Study, Shimla)