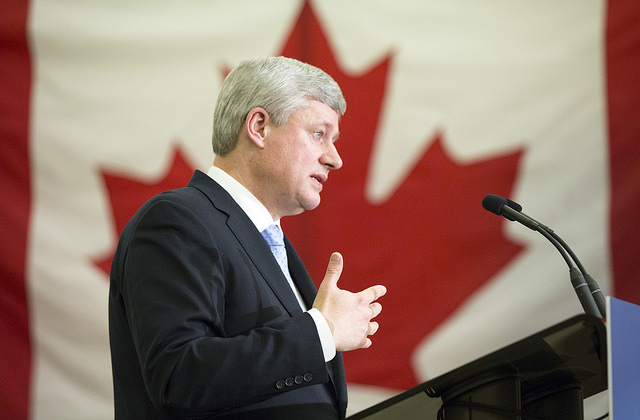 One of the less discussed questions of the Harper government’s anti-terror bill, Bill C-51, is whether Palestinian rights advocates and advocates of boycott, divestment and sanctions (BDS) will be targeted by CSIS agents armed with new powers to target and disrupt, courtesy of a judicial warrant.

Admittedly, the legislation and its intended objects are vague, except that what constitutes "terrorism," seems to be broadening beyond wanton acts of violence.

So, we need to be on guard when Public Safety minister Steven Blaney, the author of Bill-C-51, also talks about "zero tolerance" for promoters of the international BDS campaign against Israel.

What does that exactly mean? We know that Harper and his Conservatives have cozied up so close to Israeli government and policy that there appears to be little daylight between them at the moment.

The extreme right-wing coalition administration led by Likud leader Benjamin Netanyahu in the Jewish state is now in the midst of a hard fought Israeli election for March 17; and he has made no bones about connecting to "terrorism," any form of Palestinian resistance towards illegal Jewish settlement of occupied Palestinian land and the economic/military stranglehold of the Gaza Palestinian enclave.

After surprising news reports circulated Netanyahu’s willingness to offer concessions in a peace deal with the Palestinian Authority in Ramallah, the Israel PM has now sought to reassure right-wing supporters within the Israeli electorate that he is definitely opposed to a negotiated Palestinian state, arguing it would "fall into the hands of Islamic extremism and terror organizations supported by Iran."

How this jives with a January 18 2015 memorandum of understanding between Canada and Israel where both parties indicated a desire for a "peaceful" two-state solution negotiated between Israelis and Palestinians should be interesting to observe in the upcoming months if Netanyahu and his Likud party sweep to the election victory and lead a new rightist coalition.

Nonetheless, there is a consistent theme here and in other Canadian government statements of a hard line against BDS, which was originally mounted by Palestinians NGOs in the occupied West Bank after it became obviously apparent that armed struggle against Israel was not the answer.

Just days after the signing of the memorandum of understanding, Blaney alluded to this claim during a bizarre speech before the United Nations General Assembly where he combined the murders of the Charlie Hebdo cartoonists and the attack on a kosher supermarket in Paris, the war against ISIS in Iraq and "zero tolerance" approach to BDS.

"The Harper government is shameless in its opportunism," states Tyler Levitan, a spokesperson for Independent Jewish Voices. "It stoops to capitalize on a tragic situation by attacking human rights activists."

Further along, the House of Commons on Feb. 25 unanimously condemned global anti-semitism following the introduction of a motion by Liberal MP Irwin Cotler, who once addressed Israel’s major annual policy in Herzliya.

But look past the perfectly reasonable expressions of outright horror at the violence against Jews and their communal institutions and cemeteries, presumably in Europe, it is apparent in implicitly in the hyperbolic language of the Feb. 25 resolution that BDS is the intended target.

"Criticism of Israel is not anti-semitic, and saying so is wrong. But singling Israel out for selective condemnation and opprobrium — let alone denying its right to exist or seeking its destruction — is discriminatory and hateful, and not saying so is dishonest;" the motion states.

In a Canadian political climate of heightened hysteria about terrorism and little sympathy for the Palestinians, should it be surprising that not a single parliamentarian in Ottawa was willing to tackle what this resolution was really all about. (Also forgotten in the Cotler motion is that Palestinian Arabs are also Semites.)

Something prescient was expressed a little over a year ago by Israel-American journalist Larry Derfner that still seems relevant today.

He said the two-state Israel-Palestine solution — now on its deathbed in face of mounting Jewish settlements on the West Bank — may need BDS for an infusion back to life.

He represents a number of liberal Zionists — which Derfner identifies as — who are also despairing of the direction of Israel with the continued occupation and the daily and violent racism directed against Palestinian Arabs.

Up to now, many of these same people have been uncomfortable with the failure of BDS organizers to spell out one way or another on the resolution for the Israel-Palestine conflict — should it be two states versus one.

But that is becoming academic for Derfner:

"Moreover, BDS isn’t an all-or-nothing tactic. If liberal Zionists don’t want to boycott Israel, let them just boycott the settlements. If they want to support the economic boycott but not the cultural boycott, or the cultural boycott but not the academic boycott, that also helps. But if they don’t want to boycott anything, let them come up with a better idea for transforming the status quo, or just any idea that hasn’t already failed," he wrote in May 19, 2014.

Since then, it has been apparent that the Netanyahu government is in trouble and could lose the March 17 election to the Zionist Camp, led by the Labor Party. But it is not clear that the latter will differ much from its predecessor in seriously uprooting the Jewish settlers to make way for the much discussed Palestinian state.

At the same time, a surge of support for the Joint List of Arab parties and Hadash (the Jewish-Arab Communist party) will add a new dimension to Israel politics where Palestinians have for decades been marginalized.

BDS has not yet made a significant dent in the Israel economy. But Israel’s supporters are sufficiently nervous about its impact that they are trying to put it out of business.

To dub it anti-semitic is particularly abhorrent for those whose parents or offspring experienced the real thing up close in its grossest and genocide-form in Europe.

Finally, there is not direct evidence that BDS activists will receive the same kind of intelligence scrutiny that already affects anti-pipeline protesters and some members of the Muslim community.

However, amidst this toxic atmosphere in Ottawa, it is hard to rule anything out at the moment.

Paul Weinberg is a Hamilton based freelance writer who can be reached at paulweinberg@bell.net.