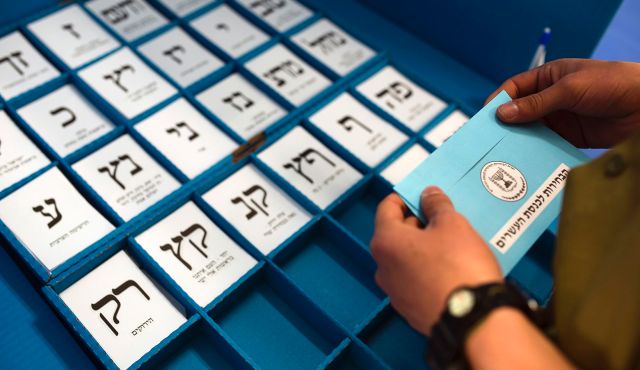 Netanyahu Deserves the Israeli People, and They Deserve Him

The first conclusion that arose just minutes after the announcement of the exit polls was particularly discouraging: The nation must be replaced. Not another election for the country’s leadership, but general elections to choose a new Israeli people – immediately. The country urgently needs that. It won’t be able to stand another term for Benjamin Netanyahu, who emerged last night as the man who will form the next government.

Netanyahu deserves the Israeli people and they deserve him. The results are indicative of the direction the country is headed: A significant proportion of Israelis has finally grown detached from reality. This is the result of years’ worth of brainwashing and incitement. These Israelis voted for the man who will lead the United States to adopt harsh measures against Israel, for the man whom the world long ago grew sick of. They voted for the man who admitted to having duped half the world during his Bar-Ilan speech; now he has torn off his mask and disavowed those words once and for all. Israel said "yes" to the man who said "no" to a Palestinian state. Dear Likud voters, what the hell do you say "yes" to? Another 50 years of occupation and ostracism? Do you really believe in that?

On Tuesday the foundations were laid for the apartheid state that is to come. If Netanyahu succeeds in forming the next government in his spirit and image, then the two-state solution will finally be buried and the struggle over the character of a binational state will begin. If Netanyahu is the next prime minister, then Israel has not only divorced the peace process, but also the world. Piss off, dear world, we’re on our own. Please don’t interfere, we’re asleep, the people are with Netanyahu. The Palestinians can warm the benches at the International Criminal Court at The Hague, the Israel boycotters can swing into high gear and Gaza can wait for the next cruel attack by the Israeli army.

The battle for all these has yet to be officially decided. The next prime minister will be crowned by Moshe Kahlon and the heads of other small parties. At the time of this writing, Kahlon has yet to declare his intention. The ball is in these parties’ court; they will decide if Netanyahu continues. Most of them despise him, but it’s doubtful whether they will have the courage to turn their backs on the public. That will be their test. That will be the test of their courage and integrity. Moshe Kahlon and Aryeh Dery, do you truly believe Netanyahu is better than Isaac Herzog for the society and social welfare you purport to care for? Does the country’s decent and courageous president, Reuven Rivlin, believe Netanyahu will be a better prime minister than Herzog? There is a lot resting on his shoulders now – but the fact that a figure like Netanyahu and a party like Likud succeeded in maintaining power as the country’s leading faction already says a great deal.

Netanyahu is threatening to surpass David Ben-Gurion as Israel’s longest running leader. He is already in second place, and yet it’s hard to think of one significant achievement on his part. The list of damage he has done is long. But he is the nation’s, or much of the nation’s, chosen one. That choice must be respected, even if it makes it difficult to hope for a good outcome. The only consolation is that another Netanyahu term will prompt the world to act. That possibility is our only refuge.