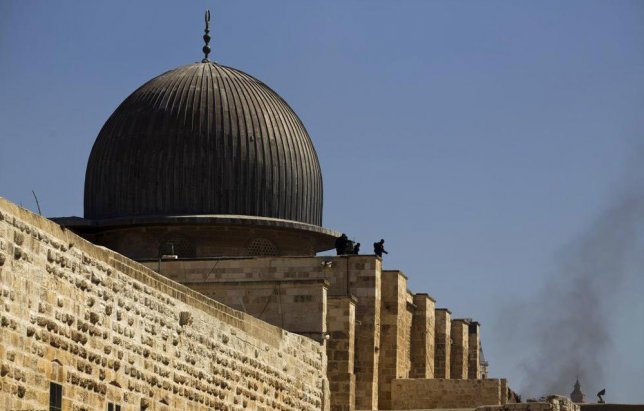 As Modi Dumps Palestine at UN, His Praise for Israeli Army Does India Military No Credit

In his zeal to harvest political capital from the Indian army’s recent action targeting terrorists along the Line of Control, Modi has conveniently forgotten that the Israeli army’s ‘valour’ has been against people fighting foreign occupation.

Israel is not India and Pakistan-occupied Kashmir is not Occupied Palestine or Lebanon – where the Israeli army regularly violates the United Nations charter and the laws of war to attack people fighting to end the foreign occupation of their homeland.

All of these distinctions seem to have been lost on Prime Minister Narendra Modi in his zeal to harvest political capital from the Indian army’s recent action targeting terrorists along the Line of Control in Kashmir.

Speaking at a public function in Himachal Pradesh on Tuesday, Modi appeared to compare the Indian army’s targeted action along the LoC to the Israeli policy of targeted assassinations and full-fledged aggression against the people of Palestine and Lebanon.

“Our army’s valour is being discussed across the country these days. We used to hear earlier that Israel has done this. The nation has seen that the Indian Army is no less than anybody,” PTI quoted him as saying.

It is one thing for lay persons and analysts to romanticise Israeli military actions, and another for the prime minister of India to do so. Modi needs to remember that Israel is an occupying power in Palestine. Its status as an occupying power has been acknowledged by the United Nations. Gaza, the West Bank and East Jerusalem, along with the Syrian Golan Heights remain the last territories in the world formally considered to be under foreign occupation.

According to a unanimous resolution passed by India’s parliament, a major part of the Indian state of Jammu and Kashmir is under Pakistani occupation. Pakistan is to India what Israel is to the Palestinians – an occupying power. The fact is that whatever Israeli military action Modi finds praiseworthy has been undertaken in defence of an illegal occupation against weak and ill-equipped adversaries. Is it then not insulting to compare the Indian army’s strikes against the terrorist proxies of an occupying power (Pakistan) to Israeli operations against the Palestinians (and the Lebanese)? What makes the comparison even more odious is that the Israeli army has been frequently and credibly accused of committing war crimes. Does Modi not know any of this?

The Israelis have always sought to suggest that New Delhi and Tel Aviv are in the same boat when it comes to terror but the Indian side has resisted facile comparisons. When Silvan Shalom, who was Israel’s deputy prime minister and foreign minister at the time, met leaders of the BJP-led government in Delhi in February 2004, he argued that the fence India was building along the LoC was no different from the ‘security fence’ Israel had erected to ‘protect’ itself from terrorist attacks – in reality, a monstrous wall built on Palestinian land. Shalom’s hosts, including Atal Bihari Vajpayee, who was prime minister at the time, heard him out but rejected the comparison. They refused his request that India join Israel in telling the International Court of Justice not to take up the ‘security fence’ matter. Similarly, his demand that India declare Hamas and Hizbollah as terrorist organisations was not accepted.

There was smart politics at play here – Vajpayee knew that whatever his or the RSS’s preferences may be, the vast majority of Indians believe India should stand with the Palestinians in their just struggle. But he also understood two other important points. First, that accepting Shalom’s suggestions would strengthen the hands of those in Kashmir who paint their state as another Palestine, and India as an occupying power – a state no different from Israel. And second, that Israel’s methods of fighting its foes were not particularly effective. As Shashank Joshi wrote last month, the targeted assassinations and surgical strikes Mossad and the Israeli military have resorted to in Lebanon and Gaza have not made Israel more secure or decimated or even weakened the capability or resolve of those fighting them. It is this failure that has driven the Israeli military towards more and more reckless – and illegal – methods that the world at large reviles and condemns.

Modi’s remarks may be poorly conceived but they come from the reflexive adulation the Sangh parivar drills into its cadres about Israel. It is not surprising that the RSS’s skewed worldview should find expression elsewhere too. On Thursday, the Ministry of External Affairs changed its stand on an important UN resolution condemning Israeli violations of international humanitarian law in the Occupied Territories, particularly East Jerusalem and Gaza.

Israel’s attempts to permanently change the status of the Occupied Territories by building settlements, barriers and interfering with water flows have been well documented. Over the past year, its aggressive efforts in and around Jerusalem to prevent Palestinian and Muslim access to holy places under occupation have been the subject of discussion at the United Nations Educational Scientific and Cultural Organisation (Unesco).

In April 2016, India joined 32 other countries on the Unesco general board to condemn Israel for its excavation and exclusion policies around the Al-Aqsa mosque and the Al-Haram Al-Sharif area, much to the anger of the Israeli government. But when a similar resolution was put to vote on October 18, the Indian delegate was instructed by the MEA to abstain. Since the text of the resolution was more or less identical, the only explanation for the change in vote is Israeli and US pressure.

The Netanyahu government’s spin on the resolution is to ignore the substantive demands it makes on Israel as the Occupying Power and focus on the use of the name ‘Al-Haram Al-Sharif’ to describe the area that Jews also revere as the Temple Mount. This, Israeli officials claim, is tantamount to denying the connection between the Temple Mount and Judaism.

In fact, it was in order to refute this diversionary Israeli argument that the latest resolution included a line “affirming the importance of the Old City of Jerusalem and its Walls for the three monotheistic religions”.

India’s change of stand in a resolution that correctly calls out Israel for its violations of the Geneva Conventions, the Hague Convention for the Protection of Cultural Property in the Event of Armed Conflict and a raft of other treaties is inexplicable from the perspective of statecraft. Along with Modi’s adulation for an army notorious for enforcing illegal occupations, the unwarranted abstention damages India’s reputation as a serious power – as well as its national interest.

These are the highlights of the resolution India abstained on, after voting for similar language in April:

• Deeply deplores the failure of Israel, the occupying Power, to cease the persistent excavations and works in East Jerusalem particularly in and around the Old City, and reiterates its request to Israel, the occupying Power, to prohibit all such works in conformity with its obligations under the provisions of the relevant UNESCO conventions, resolutions and decisions

• Deeply decries the continuous Israeli aggressions against civilians including Islamic religious figures and priests, decries the forceful entering into the different mosques and historic buildings inside Al-Aqṣa Mosque/Al-Ḥaram Al-Sharifby different Israeli employees including the so-called “Israeli Antiquities” officials, and arrests and injuries among Muslim worshippers and Jordanian Awqaf guards in Al-Aqṣa Mosque/Al-Ḥaram Al-Sharif by the Israeli forces, and urges Israel, the occupying Power, to end these aggressions and abuses which inflame the tension on the ground and between faiths;

• Deplores the military confrontations in and around the Gaza Strip and the civilian casualties caused, including the killing and injury of thousands of Palestinian civilians, including children, as well as the continuous negative impact in the fields of competence of UNESCO, the attacks on schools and other educational and cultural facilities, including breaches of inviolability of United Nations Relief and Works Agency for Palestine Refugees in the Near East (UNRWA) schools; Strongly deplores the continuous Israeli blockade of the Gaza Strip, which harmfully affects the free and sustained movement of personnel and humanitarian relief items as well as the intolerable number of casualties among Palestinian children, the attacks on schools and other educational and cultural facilities and the denial of access to education, and requests Israel, the occupying Power, to immediately ease this blockade;