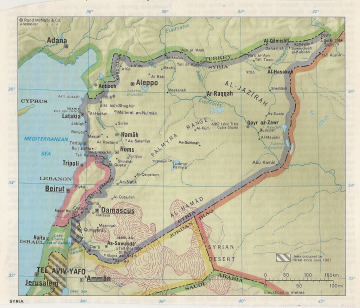 An Obama Attack on Syria Will Backfire

While the US, UK and France (the old and the new colonial powers) debate their response to the suspected chemical weapons use in Syria, the Syrian government continues to deny the allegations. Since last Saturday we have witnessed a number of reports, documents and pictures that plainly indicate that the use of these weapons was by the mercenaries supported by the US and the Saudis, not by Damascus.

The US on the other hand has ignored all such evidence and continues to talk of attacking Syria, which might have already taken place before this article goes to print. The Syrian government and its allies maintain that it was the mercenaries that launched a “false flag” attack by using chemical weapons on civilians, anticipating that the blame would fall on the government and provoke the international community into a response that would help their positions on the ground after being defeated by the Syrian army in a number of confrontations.

What is a ‘false flag’ operation?

In its crudest and simplistic form, a “false-flag” attack is a covert operation that is carried out with the aim of being perceived as the work of another group, organization or country. False flag operations provide the pretext, or excuse for military action, or war, while hiding the deeper more strategic reasons. It provides the opposition with a double challenge: first to deconstruct the false flag operation; then to seek the actual rationale for war-making.

Most often the notion of “false flag” conjures the memory of the imaginary WMD and historical debacle in Iraq, yet the tactic is as old as colonialism. Although colonial history is replete with false flag attacks, the end of the Cold War saw a systematization of a specific complex of measures designed to give a sophisticated illusion of an undeniable fact. Here is how the operation is put into practice:

First, a highly visible target is identified. In this case it was Damascus.

Second, a specific moment is chosen for the attack, a moment rich in political significance. Often on the verge of negotiated settlements, the false flag attack is carefully constructed to destabilize. It can be right before or after a crucial negotiation or an election, or it can be matched to a religious or secular holiday so that maximum coverage is attained. In the Syrian case, it was just as the UN inspectors had landed to check for any lead on the previous chemical attack.

Third, the actual false flag attack is conducted with the aim of having a maximum amount of killed civilians, to secure the maximal amount of media coverage. The accused perpetrators are viewed as monsters, not the kind of people any government should negotiate with. Thus tarnished, the rest is as easy as pie.

Kerry Brushes Aside Criticism, But Is Pressed to Respond

Secretary of State John Kerry has brushed aside criticism that the chemical attacks in Syria were false flag operations. But the very fact that the Obama Administration has had to respond to the charge at all suggests that they are nervous and on the defensive about it, and worried that people everywhere have caught on so quickly.

For those that still believe such proposition is highly unlikely, please continue to read the following reports:

• The Lavon Affair – In 1955, in an effort to press Great Britain to maintain its military presence in Egypt, the Israeli secret service initiated plans to attack British facilities in that country to give the impression that it was done by Egyptian nationalists encouraged by Nasser. The plan failed, it caused the collapse of the Moshe Sharett government in Israel and the return of David Ben Gurion to the Israeli prime minister-ship.

• The Tonkin Bay Incident is a classic example. On August 2, 1964, a sea battle occurred between the US and North Vietnam in the Gulf of Tonkin. Both sides experienced damage to their vessels and the North Vietnamese lost 4 men and suffered 6 casualties. Two days later a similar battle was claimed by the National Security Agency. Based on the assumption that these two incidents occurred, the US Congress granted permission for military action, which resulted in air strikes on North Vietnam and ongoing intervention in South East Asia. However, in 2005 the NSA released hundreds of de-classified documents from the Vietnam War period which included research that assessed the second attack had never happened.

• In 2003 UK newspaper The Guardian published an article that presented recently unearthed documents that revealed candid discussions about “false flag” operations in Syria. In 1957 UK Prime Minister Harold Macmillan and US President Dwight Eisenhower approved a plan to organize fake border incidents as justification for an invasion of Syria by its pro-Western neighbors. Concern had been growing about the increasingly pro-Soviet and anti-Western attitudes in the country since the Ba’ath and Communist parties had overthrown the military regime.

The documents are quoted as saying: “a necessary degree of fear… frontier incidents and (staged) border clashes, would provide a pretext for intervention… the CIA and SIS [MI6] should use … capabilities in both psychological and action fields to augment tension.”

The plan, also talked about “eliminating” key individuals in Damascus: “In order to facilitate the action of liberative (sic) forces, … a special effort should be made to eliminate certain key individuals. … [to] be accomplished early in the course of the uprising and intervention.”

• A series of “false-flag” attacks, known as “Operation Northwoods” was proposed within the US government in 1962, with the goal of justifying military intervention in Cuba. The propositions, which were finally rejected by President John F. Kennedy, included carrying out “terror” attacks on US cities and planting fake evidence to implicate the communist Cuban government. The documents, which were released in 1997, stated: “Since it would seem desirable to use legitimate provocation as the basis for US military intervention in Cuba, a cover and deception plan…could be executed as an initial effort to provoke Cuban reactions.” It went on to specify potential tactics that included: “start rumors (many),” “land friendly Cubans in uniform ‘over the fence’ to stage attack on base,” “burn aircraft on air base (sabotage)” and “conduct funerals for mock-victims.”

• Add to these, the case made against Iraq in 1990 with the fabricated report of Iraqi soldiers taking babies from their incubators, witnessed by no other than the daughter of one of the Kuwaiti emirs. Or the report that Gadhafi distributed Viagra to his troops to rape Libyan women, etc.

• Among those with expertise at false flag operations are the Algerian military and security apparatus which, during the 1990s, carried out a series of these operations to undermine the opposition and turn the population against the growing Islamist movement in the country. Among the more odious of these operations was the kidnapping and execution of a group of French Trappist monks, the monks of Tibhirine. The operation was meant to derail talks in Rome between the Islamists and the government. After the killings, the talks were cancelled.

False flag operations tend to be “time-considered.” It is only necessary to defend such actions temporarily, in order to provide public support for some broader military intervention. What is needed is “plausible deniability” (a CIA-coined expression meaning that it is possible that the US was not behind the attack) in the short term while the attack takes place. Once the attack is complete, the administration can hide behind a number of excuses such as “faulty information,” etc. and by then people have either forgotten or care less about the consequential crisis. Just remember Iraq and how the war was sold and consent was engineered. But by then the damage is done, the war fully operational. There is no turning back.

The same old media that sold the American public the Iraq quagmire are at it again. According to these media outlets, the US is preparing for cruise missile strikes. Now, to understand what that really means, one has to recognize what cruise missiles stand for in the collective psyche of the U.S. Democrats: Democrats use cruise missiles not only to destroy a target, but also to “appear strong” and macho, and to get the Republicans off their backs. Just remember Clinton and his attack on Iraq, Sudan and Afghanistan every time he was in a political pickle with the Republicans. In the current crisis and the intended attack on Syria, the evidence available and facts are irrelevant. The fact that such claim is totally ludicrous (Syria could not have used chemicals 2 days after the arrival of the UN investigation team) will not at all prevent Obama to launch a series of cruise missile strikes just to appear strong and macho.

The major goals of the current attempt to attack Syria are many folds: to placate the Republicans and the Neocons in the Democratic Party that seems to have more control of foreign policy, and to change the military balance of power on the ground in favor of the mercenaries after the latter had suffered an ignominious defeat at the hands of the Damascus government, as such, derailing U.S. regional plans to bring down Syria in order to isolate Iran.

The role of Turkey, the Saudis, Israelis (not to mention the French and the British) — who, notwithstanding the facts, are somehow sure that it was the work of the Syrian government — in the creation of this crisis should not be overlooked. They have all played a role in trying to bring down the Assad government at Washington’s behest. Their failure to do so, to fulfill this role assigned to them, is one of the main reasons for the U.S. strike and has forced Washington’s hand to involve itself openly militarily in the conflict.

At this juncture the Obama Administration had a number of choices: to accept that their plans for regime change in Syria had failed, to encourage the opposition to come to the negotiating table and with the Assad government, and perhaps other international, regional players, hammer out a political solution to the crisis. But it chose instead to up the ante, to intensify the military confrontation bringing their French, British and Israeli allies along for the ride, and in so doing risk an even broader conflict.

It might sound cliché-ish but this is a time for negotiations, not war before the region and the world sink more deeply into the abyss. It is not too late – but we, the world, are very close to a major, avoidable conflagration.