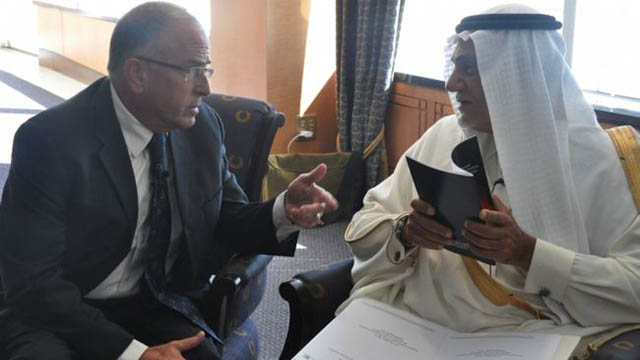 Saudi Arabia and Israel Against Gaza

Israel’s assault on Gaza has confirmed warm ties between Israel and several Arab regimes. Now, however, these ‘moderate regimes’ have made a strategic alliance with Israel to finish off Palestinian resistance and restore PA power in Gaza. Saudi Arabia is leading this group. Dr. Tariq Dana explains.

The current Israel assault on Gaza has confirmed what we already know about the existing warm ties between Israel and several Arab regimes. This time, however, the so-called ‘moderate camp’ has constructed a strategic alliance with Israel and shown a blatant hostility to Palestinian resistance. And again, similar to the logic that guided this camp’s antagonistic position toward Hizbullah in 2006, the Palestinian resistance was accused of provoking Israel to wage a deadly war, thus echoing the baseless Zionist claim of Israel’s right to “self-defense”.

The Palestinian cause has always been exploited as justification for sustaining tyrannical regimes in the region. Most Arab states used to express dishonest support for the Palestinian cause while simultaneously maintaining diplomatic, economic and security relations with Israel.While this politics is still valid and evidently echoed by some countries, others such as Saudi Arabia, Egypt and United Arab Emirates, among others, have shown a growing alignment with Israel, openly hoping that Israel will finally finish off Hamas and other resistance forces and restore PA power over Gaza.

Whereas Egypt appears to be the key actor in this camp-given its historical/regional weight, control of border crossing with Gaza, ceasefire proposals and as the favored mediator between the Palestinians and Israelis- it is in fact Saudi Arabia that is leading, guiding, financing and promoting expansion of the anti-resistance camp. Despite its crucial role, Egypt is no longer a commanding regional force capable of enforcing its will over the region. Rather, the military leadership has apparently transformed Egypt’s political system into a puppet regime in service of the Saudi and Gulf States’ strategic interests, a matter that clearly runs counter to the real interests of the Egyptians. Regarding Gaza, Egypt has become a channel through which the Saudis pass their diktats to damage the resistance infrastructure in Gaza and weaken its capacity to deter Israel’s aggression.

There are many reasons to believe that the growing Saudi-Israeli alignment is well suited. Above all, Saudi Arabia and Israel are ideologically compatible in the sense that both have exploited, manipulated and subjugated their respective religions for fascistic purposes. The result is the emergence of racist and violent political ideologies that have been feeding the most narcissistic murder and bloodshed in the region. The implicit agreement between Saudi Wahhabism and Israeli Zionism on fueling destruction of the region is a natural historical outcome of their ideological encounter.

Although the Saudi-Israeli relation is not formalized with a peace treaty, recent years have witnessed intensified cooperation between them, particularly in fields of security, trade and through regular meeting between security and political officials. The first sign of Saudi-Israeli trade relations was expressed in the 2005 Saudi announcement that it was ending its ban on Israeli goods and services. Crucially, Saudi economic normalization with Israel came at a time when Palestinian civil society initiated the global BDS campaign to increase international pressure on Israel through economic boycott.

However, it was the Saudi and Israeli paranoiac obsession with security that brought to light their common interests and solidified their behind-the-scenes alliance. Beginning in the 1970s, the Saudis, Israelis and Americans collaborated closely to form and foster the Afghani and Arab Mujahidin groups against the Soviet Union.These groups have subsequently become organized in Al-Qaeda, and presently in the Al-Nusra front and ISIS. Saudi Arabia and Israel have also played key roles in supporting the US aggression on Iraq in the 1990s, and its occupation and destruction of the Iraqi state and society in 2003. The Saudi-Israeli common interests became more evidently organic in their enmity toward the rising regional influence of Iran. Both have regularly expressed analogous statements and attempted to push the US administration to attack Iran. As part of their proxy war against Iran, the Saudis and Israelis, under the tent of the US, have jointly founded, funded and equipped terrorist groups to destabilize and divide Syria, Lebanon and Iraq along sectarian and religious lines.

Saudi Arabia’s unambiguous support for Israel’s ongoing aggression against Gaza has taken different forms. As usual, the Saudi oligarchy’s initial step to justify its policies begins with recruiting its Wahhabi establishment to offer a religious justification. Its grand Mufti has issued a fatwa against pro-Gaza marches, saying that such marches “are just useless demagogic actions”. Second, the Saudis have publicly blamed Palestinian resistance for encouraging the Israeli slaughter in Gaza. Its illiterate king went so far as to say that Hamas and other resistance forces “have distorted the image of Islam with its purity and humanity and smeared it with all sorts of bad qualities by their actions, injustice and crimes.” Unsurprisingly, reports suggest that Saudi, Israeli and Egyptian officials and intelligence meet regularly to discus the war’s progress and confer on its next steps. Not least is the Israeli official confession that Israel, as never before, is increasingly finding itself in a much-needed regional coalition.

The growing capacity of the Gazan resistance to achieve a solid level of deterrence marks a defeat for Israel and its regional allies. Those who relied on Israel to smash Palestinian resistance are again disappointed, as was the case with the victory of Lebanese resistance in 2006. Saudi Arabia in particular has become the main regional backer of Israel’s aggression. There is no surprise in this, given that the Saudi Wahhabism-backed Takfiri ideology and Israeli Zionism are two sides of the same coin.