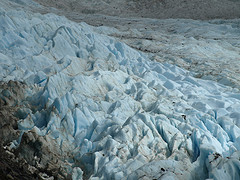 SANTIAGO, Chile — A white gas mask hanging from her neck, Paula Bañados strode side by side with 30,000 other marchers through this capital one recent Friday, a determined look on her face.

“Patagonia without dams!” Ms. Bañados, 19, shouted with the others, pumping a fist in the air.

“The government is saying we will be left without energy, but it’s a lie,” she said. “They are just trying to scare us. But we won’t be scared away, because we know we’re right.”

By the time Ms. Bañados reached Chile’s presidential palace, some demonstrators had begun hurling stones and pieces of wood at the armored police vehicles. As sirens blared, the police responded by firing water cannons on the crowd, driving protesters back.

Other protests took place in several more Chilean cities. In what has become a surprising national movement, organizers have mounted large protests for several weeks since a government environmental commission in May approved the $3.2 billion HidroAysén dam complex in a pristine region of Patagonia, known for breathtaking glaciers and lakes, that draws thousands of tourists a year.