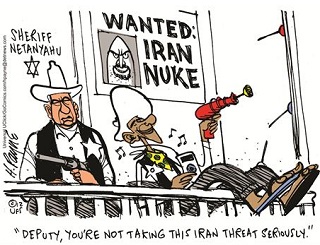 Gibbon in his The Decline and Fall of the Roman Empire writes of the Romans, "They endeavored to convince mankind that their motive was not the temptation of conquest but was actuated by the love of order and justice."

West Asia, the Middle East is probably the most unstable part of the world - thanks largely to U.S. policy. And because of the region’s importance to U.S. hegemony people here are saturated with propaganda. Today, the drumbeats of war are getting louder and louder.

Relentless media coverage of Iran is almost always negative. The breathless overpaid network anchors intone in somber tones: Iran denies, Iran refuses, Iran turns down, Iran won’t accept, etc. Iran is a piñata for the regime in Washington. It is blamed for everything from measles to arthritis to acne. I don’t use the word administration for the rulers in Washington but rather regime.

Often U.S. people only become interested in the history of other countries when it’s too late. Iran is a case in point. History tells us that Iran has not invaded another country in at least 250 years.

Ignorance about Iran is laced with hubris and arrogance. The U.S. destroyed democracy in that country in 1953 with the CIA-led coup, Operation Ajax then supported the autocratic Shah for the next 26 years. These were fatal first steps.

Pompeo, when he represented Wichita, was known as the congressman from Boeing, demands that Iran “behave like a normal nation.” Does he mean, by any chance, the U.S. itself or its allies Israel, Saudi Arabia and Egypt, all of whom violate international law?

The Joint Comprehensive Plan of Action, popularly known as the Iran Deal was agreed to in 2015 by the 5 permanent UN Security Council members plus Germany. Yukiya Amano, the Director of the UN’s International Atomic Energy Agency, in charge of inspecting Iranian sites said Iran was "subject to the world’s most robust verification regime" and after multiple inspections said Iran was in compliance. In May of 2018 the U.S. pulled out of the Deal. Why did the U.S. abandon its commitment? The Deal which Washington hawks turned their backs on was working. A year later the Tweeter-in-Chief, National Insecurity Adviser Bolton and Pompeo turn up the heat on Iran, impose harsh sanctions and utter repeatedly the menacing phrase, “All options are on the table.”

Iran is accused by the U.S. of many things but far and away the most absurd charge is that Iran is somehow allied with Al-Qaida and the Taliban. Both these fundamentalist fanatical groups, and let’s include ISIS, detest Iran and regard its Shia Islamic faith as heresy.

This is what negotiations look like. It’s right out of the Mafia playbook. The U.S. is holding a gun to Iran’s head. Tehran must concede all of Washington’s demands in advance then and only then will we sit down and talk. Obey the Godfather or else.

Another regime hardliner is Brian Hook. He goes on PBS and NPR and denounces Iran’s “expansionist foreign policy from Lebanon to Yemen.” Is the pot calling the kettle black here? Hook and other regime officials accuse Iran of “malignant behavior in the Middle East” and call it the “the world’s leading sponsor of terrorism.”

The Great Prevaricator-pulled out of the Iran Deal-maybe a form of birth control. More graphic terms would be, broke its word, abandoned or reneged.

Nick Shifrin on the ever sober and serious PBS News Hour on May 13 said that Iran, which he called uh-ran-, “had not received the benefits of the Deal.” He got that right. But why Nick? It’s because of the draconian sanctions Washington has imposed on Iran, causing great hardship for ordinary Iranians. Sanctions are a major weapon in the U.S. imperial tool box. Ask the Cubans. Sixty years of them. They got a little relief under Obama but that’s been rolled back by the Great Prevaricator.

NYTimes May 15, 2019, Front-page article - “This is a crisis that has entirely been manufactured by the Trump administration,” said Vali R. Nasr, dean of the Johns Hopkins School of Advanced International Studies and a frequent guest on the PBS NewsHr and NPR.

He pointed to Mr. Trump’s decision to pull out of the Iran nuclear deal in May 2018, coupled with the administration’s failure to get any other nations to do so.

“None of the other signatories to the Deal were persuaded by the case the U.S. was making,” Mr. Nasr said. “And that is because this administration’s policy on Iran, at a fundamental level, does not have credibility.”

NYTimes May 14, 2019 front-page article - “One American official, speaking on the condition of anonymity to discuss confidential internal planning, said the new intelligence of an increased Iranian threat was “small stuff” and did not merit the military planning being driven by Mr. Bolton. The official also said the ultimate goal of the yearlong economic sanctions campaign by the Trump administration was to draw Iran into an armed conflict with the United States.”

In echoes of the 2003 attack on Iraq there are hyped-up threats to what is called U.S. interests. These interests are never spelled out but surely they involve oil, U.S. military bases, Israel and the feudal, fundamentalist, patriarchal, homophobic, misogynist monarchies of Saudi Arabia, Kuwait and the UAE. Saudi Arabia itself, the home of intolerant Wahhabism, has done much to foment and bankroll jihadist groups in many countries..

The threats announced by Washington are never qualified as alleged, possible, supposed, rather they are stated as fact and are attributed to anonymous sources and couched in the passive voice, always a good cover as Orwell astutely pointed out. The media with few exceptions parrots the official line.

MidEast policy is being driven by war hawks Bolton and Pompeo, the latter says he is guided by the Bible. The bellicose war talk is not conducive to bring about peace talks and reconciliation. A first step would be to reestablish diplomatic relations. When I go to Iran I have to go through the Pakistani Embassy in Washington.

The Abraham Lincoln aircraft carrier battle group has been dispatched to the Persian Gulf. It was scheduled to go there on what is euphemistically called routine patrol. Its deployment was moved up a week. The carrier has 6,000 personnel and 50 fighter jets. It is accompanied by other warships. Iran has virtually no navy, certainly no aircraft carriers, or air force to speak of. Its ancient U.S. and French jets are mostly grounded as there are no spare parts.

Iran spends a pittance on its military compared to the U.S. and many other countries. According to the Stockholm International Peace Research Institute, Iran in 2018 spent $15 billion. A little more than the cost of one U.S. aircraft carrier. Pentagon spending is close to a trillion dollars when all the budgets are factored in.

Wars and the threat of wars are great for the military industrial complex. Lockheed Martin, Northrup Grumman, Boeing and the other arms merchants make a fortune on weapons.

Be afraid. State Dept personnel are being evacuated from Iraq.

Trust U.S. intel and pronouncements from the White House? Do so at your peril. The record does not inspire confidence. The 17 intelligence agencies with budgets in the billions missed such minor events like the Tet Offensive, the overthrow of the Shah, the fall of the Berlin Wall, the collapse of the Soviet Union and 9/11. The agencies promoted as fact their “slam-dunk” cooked-up intel on Iraq and its weapons of mass destruction, mobile chemical labs and “mushroom clouds,” its putative links to Al-Qaida and 9/11, relying on charlatans like Ahmed Chalabi and a screwball informant known as curveball. We don’t even have to discuss the consequences of the invasion/occupation, the hundreds of thousands of deaths and millions of refugees and the rise of ISIS. The biggest intel failure of them all - climate disruption.

U.S. views of Iran are jaundiced by the 1979 revolution. Iran, under the Shah was a key part of U.S. control and domination of the Middle East. That was followed in November, 1979 with the hostage crisis. You have to ask, Why would Iranians seize the embassy? A little history is informative. Go back to 1953 when the U.S. embassy was the base for the coup which overthrew the popular democratic leader of Iran, Mohammed Mossadegh and reinstalled the Shah on the Peacock Throne. The first instance, that I know of, of the term blowback occurs in the CIA report on the coup.

In September 1980 Iraq invades Iran, a clear violation of international law. Iraq uses chemical weapons against the Iranians. Iran does not respond in kind. Baghdad was removed from the State Department’s terrorism list and Iran was added. Donald Rumsfeld, Reagan’s Special Envoy, goes to Iraq and meets with Saddam Hussain. There’s a photo of the two great statesmen shaking hands. By 1987 the U.S. is fully backing Sadaam Hussein. U.S. warships are attacking Iranian oil installations. On July 3, 1988 Iran Air Flight 655, a civilian plane, is shot down by the U.S.S. Vincennes killing all 290 passengers and crew.

The captain of the Vincennes rather than being court martialed was given a medal. Later, when Bush the First is asked about the incident, he infamously said, “I don’t care what the facts are. I will never apologize for the United States of America.” A few years later the U.S. paid compensation to the victim’s families but without acknowledging any guilt or wrongdoing. The ancient Greeks knew hubris well and its deadly outcomes.

The U.S. does not like independent nationalism. All over the globe it seeks out and nurtures servile, obedient and compliant states who will speak when spoken to and will avert eye contact with the master.

After 9/11 – you’ll recall the Great Prevaricator saying he saw Muslims in Jersey City dancing in the streets. A total fabrication. In Iran there was a spontaneous outpouring of solidarity with the U.S. Many people lit candles and participated in vigils.

Iran has been attacked by jihadis from neighboring Pakistan and Afghanistan. Iranian diplomats were slaughtered in Mazar-e-Sharif in Afghanistan.

It looked like in the aftermath of 9/11, and with the moderate cleric Khatami as President that there would be closer relations between Iran and the U.S. Iran played a role in driving Al-Qaida out of Afghanistan. And then at the Bonn conference in December 2001, it was instrumental in getting its allies to support Hamid Karzai as the leader of Afghanistan. The honeymoon didn’t last long. In the next next month Bush the 2nd announced in his State of the Union address that Iran was on its Axis of Evil list. Quite a blow to Khatami who was moving for better ties with Washington. As in the case of the Deal, the hardliners were able to say, you can’t trust the Americans, they keep moving the goal posts..

Israel says Iran poses an existential threat. Israel has one of the most powerful militaries in the world and it has nuclear weapons. And it has crucially the unconditional military, economic and diplomatic support of the world’s hyperpower. It is highly improbable that Iran would risk suicide by attacking Israel. Israel wants a monopoly on nukes in the Middle East. It reasons if Iran gets the Bomb, then Turkey, Egypt and S.A. will follow.

The bully in the bully pulpit is surrounded by bellicose voices of a dead-end imperialist mindset. Flag waving and war talk is not what is needed. Negotiations instead of confrontation. Send diplomats, not warships, bombers and missiles.