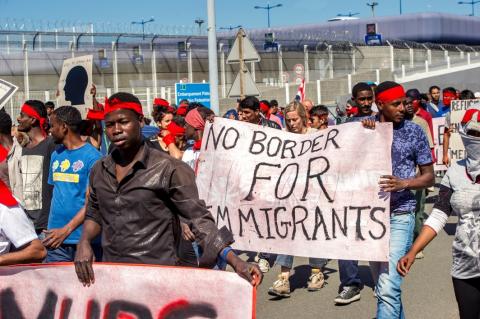 Bolivia’s government and social movements have announced they will host a global people’s summit on migrants and refugee rights. The "People’s Conference for a World without Walls and Universal Citizenship", set for June 20 and 21, is expected to draw together immigration experts and pro-migrant and refugee rights organisations and activists from around the world.

“Given the alarming situation of this international phenomenon and its consequences, we have decided as a government and social movements to extend this invitation,” Bolivian President Evo Morales told reporters on March 9, following a meeting with the National Coalition for Change (CONALCAM), which unites Bolivia’s largest indigenous, worker and campesino organisations.

Morales pointed to deepening global inequality and ongoing military interventions as the main culprits for the world’s migration crisis.

“It is unacceptable that we have walls for immigrants, for Latinos and refugees, but there are no walls for military interventions, for the looting of our national resources. That is why together, the state and people, need to have a deep global debate on migration today.”

A leader of the national rural teachers’ union federation, Fredy Mamani, read out the conference call on behalf of CONALCAM. The call noted that unlike hurtful border controls, migration has been inherent to humanity, as throughout history many peoples have been forced to migrate to flee from disasters, wars, military dictatorships and even ethnic cleansing

The call raises particular concern with the immigration policy of US President Donald Trump, “which seeks to expel up to 3 million migrants”, as well as the European Union’s Return Directive, which was introduced in 2008 with the aim of sending back undocumented migrants.

“We cannot use the excuse of protecting national security and the fight against transnational crime to attack the fundamental rights of migrants and their families, including to the point of unacceptable discrimination and xenophobia.”

“We call on the peoples of the world, on all nations that represent us, to work towards universal citizenship and the elimination of borders ... for these reason we are convening a world people’s conference to generate alternatives.”

Bolivia’s vice minister for co-ordination with social movements Alfredo Rada said on March 12 that the summit seeks to “organise an international response from the people, but also with the support of governments, so that this issue is debated internationally and that walls are put up not to migrants but to xenophobic, discriminatory policies that stop citizens being able to freely move from one country to another.”

He explained that the intention is to push in international forums to get the United Nations to adopt the final declaration once the summit is over.

The conference has already been welcomed by the presidents of the countries that make up the Bolivarian Alliance for the Peoples of Our Americas (ALBA). The proposal had been initially raised in Caracas, Venezuela on March 5 at a meeting of the anti-imperialist bloc that includes Venezuela, Cuba, Bolivia, Ecuador and seven other Latin American and Caribbean countries.

The ALBA president’s meeting also resolved to reactivate a fund – initially set up in 2008 when the EU passed its Return Directive – to provide legal and financial support to Latin American and Caribbean migrants in the US.

The people’s summit will be the third of its kind, after similar summits on climate change and in defence of Mother Earth were hosted by the Bolivian government and social movements in 2010 and 2014.

These summits played an important role in helping to galvanise the global climate justice movement.