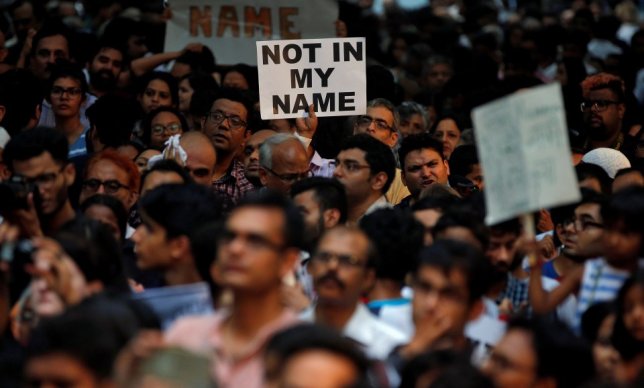 There is a repugnant euphemism that has entered the lexicon of Indian prime-time television lately. “Cow vigilantes” has become contemporary shorthand for murderous right-wing mobs who kill Muslims simply for being Muslim. They shelter behind the misleading respectability of the euphemism.

For us in the media to use the word “vigilantism” to describe hate crimes against India’s Muslims is nothing more than the hideous normalization of bigotry.

The debate has been falsely posited as one about eating beef. (Cows are worshiped by millions of Indians, and many Indian states have banned cow slaughter.) The reality is that rumor, hearsay and prejudice are being used to assault Muslims, many of whom are cattle traders and shepherds or are linked to the dairy and leather business.

A few days ago, 28-year-old Rakbar Khan was killed in Alwar, in the western state of Rajasthan. His attackers accused him of being a cow smuggler.

His death brought home the truth we refuse to say out loud: India’s state and its insitutions have become part of the mob.

Horrific details have emerged about how the police, who found the injured Khan lying in a pool of mud, reportedly took three hours to ferry him to a hospital, stopping instead to drop the cows off at a shelter. Then they allegedly took a break for tea while Khan bled to death. Some eyewitnesses say Khan, who was already reeling from his injuries, was also beaten by the cops. Either way, through their life-endangering callousness, the Rajasthan police have blood on their hands.

But if India is in danger of descending into a Muslim-hating mobocracy, it’s not just because of the police force’s violations and failures. Lawmakers and legislators, most of whom are from the ruling Bharatiya Janata Party (BJP), are guilty of coming to the defense of the Muslim-murdering mobs.

Indeed, Gyandev Ahuja, the local BJP legislator from Alwar, reacted to Khan’s death by defending the men accused of killing him. Khan’s friend Aslam told the police that their attackers specifically named Ahuja, boasting about how no one could touch them because the legislator was on their side. Since then, Ahuja has tried to pin the full blame on the police and has disavowed all responsibility. He has shown this kind of impunity before. Last year, Pehlu Khan, a Muslim dairy farmer in Alwar, was beaten to death by right-wing mobs who falsely accused him of smuggling cows. Then, too, Ahuja defended those accused, warning that “sinners” like Khan would meet this fate.

In case one thinks Ahuja is a fringe leader who can be ignored, let’s talk about Indresh Kumar, a senior functionary of the Rashtriya Swayamsevak Sangh (RSS), the ideological parent of the BJP. His response to Rakbar Khan’s killing was to put the onus on Muslims for their own safety. Stop eating beef, he declared, and the lynchings will stop on their own. His words were supported by Union Minister Giriraj Singh, a ministerial colleague in Prime Minister Narendra Modi’s council. Another cabinet colleague of the prime minister, Jayant Sinha, the former India head of Omidyar Network, was photographed garlanding men who had been sentenced to life imprisonment for lynching a Muslim man. They were released on bail.

Why would Modi not take action against these leaders? Or at least reprimand them by name? If nothing else, one would imagine that a party blemished by the tag of being anti-Muslim would be jolted into doing some serious damage control.

Yes, Modi has more than once condemned the thuggish violence of the cow terrorists (albeit not always swiftly enough). But either his rebukes have been too gentle or his partisans are just ignoring him. Given that the prime minister is a strongman who rules the government and controls the party with an iron fist, it’s tough to believe that an unequivocal message from him would be ignored.

So why isn’t Modi doing more to reign in the cow terrorists — as well as those from his party who defend them? Unless the prime minister shows he means business, the support of BJP leaders will only continue to embolden the Muslim-hating mobs.

The data is especially embarrassing for a prime minister who has sought to showcase Indian soft power and civilizational multiculturalism on the global stage. Last year an analysis by research group IndiaSpend tabulated that 97 percent of the cow-related violence that has taken place in India from 2010 to 2017 was reported after Modi’s government came to power in 2014 — and half of these cases were from states governed by the BJP.

It doesn’t matter that not all Indian Muslims eat beef. Cow consumption in India can be mapped along regional and cultural lines; some surveys show that 12.5 million Hindus are among the 80 million Indians who eat either beef or buffalo. The BJP displays its hypocrisy by not opposing beef consumption in the northeast or in states such as Goa, where many of its constituents enjoy a good steak.

In 2015, Mohammad Akhlaq, father of an air force official, was killed in Uttar Pradesh, India’s most populous and politically significant state, after rumors that he had beef in his fridge. A slew of BJP politicians defended his killers. In 2016, when one of those charged with murder died from health complications, his coffin was draped in India’s national flag. The BJP has always distinguished itself by its brand of muscular nationalism. Ironically for the party, the flag wrapped around the coffin of an accused murderer was not just defiling the Indian tricolor; it was fully anti-national. Among those who defended the accused at the time was Yogi Adityanath, a saffron-robed monk. He was once considered part of the extreme fringe of the BJP. Today, he is the state’s chief minister.

It all makes one wonder whether the Hindu-Muslim polarization that every such incident creates is not part of some larger plan, especially in election season.

But if Modi really wants to honor his promise that the constitution is India’s holy book, then he needs to stop the cow from becoming a cloak for the cowardice of men who hate their fellow citizens.