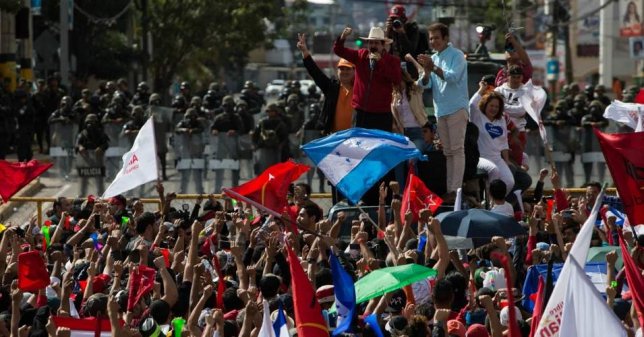 Do you smell a double standard? You should—and hardly for the first time.

As the usual crowd of neo-conservative regime-changers, liberal humanitarian interventionists, and Israel lobbyists join President Trump in backing anti-government street demonstrations in Iran, their collective silence has been deafening regarding the killing of at least 30 people in Honduras by police, after protests against alleged fraud in that country’s recent presidential election.

Do you smell a double standard? You should—and hardly for the first time.

The op-ed pages of major U.S. newspapers weren’t filled with columns demanding a tough response last July when Saudi authorities executed four Shia Muslim men for participating in protests against security forces who run a police state much tighter than Iran’s. The victims—like other pro-democracy demonstrators who have been condemned to death—were reportedly convicted on the basis of confessions produced through torture.

Nor did many columnists and think-tank pundits complain when security forces in Bahrain killed five protesters last May amid what Human Rights First called a “ferocious crackdown against opposition human rights leaders.” The same tough Sunni monarchy crushed huge street protests in 2011 with the help of Saudi troops.

And now, amid serious accusations that the recent presidential elections in Honduras were stolen, where are the voices condemning the killing of protesters there by heavily armed military police?

The protests broke out after a highly suspicious ruling by Honduras’s Supreme Electoral Tribunal—delayed for 36 hours because of thousands of missing vote tally sheets—handed a narrow and unconvincing victory to the incumbent conservative presidential candidate, Juan Orlando Hernández, in the Nov. 26 national election.

His party took power after a military coup in 2009, which the Obama administration, to its great discredit, eventually endorsed. Hernández himself was first elected president in 2013, apparently with the help of funds stolen from the Honduran Social Security Institute. A 2010 State Department cable stated that “he has consistently supported US interests.” He enjoys the respect and friendship of President Trump’s Chief of Staff John Kelly, who got to know the Honduran president while heading the U.S. Southern Command.

Hernandez’s run for re-election last fall violated the Honduran constitution, which grants presidents only one term in office. It was supremely ironic: the military coup in 2009 was predicated on the charge that the left-leaning president at the time, Manuel Zelaya, was contemplating running for a second term, which he staunchly denied.

The only consistent standard shared by the Honduran military and Washington, then as now, is to support conservative governments in Central America.

Within days of Hernández’s latest alleged electoral victory, the Trump administration cleared the way to him receiving $644 million in aid appropriated by Congress, by certifying that his government was fighting corruption and defending human rights.

At the time, the election tribunal had not yet even certified the results; the Hernández government had suspended constitutional rights; and police were battling protesters in the streets with tear gas, water cannons, and gunfire.

Moreover, the government’s record on corruption is debatable at best. Testimony by a convicted Honduran drug kingpin in New York last spring implicated the brother of President Hernández (who denied the charge) in a money laundering operation. The same kingpin reportedly also gave U.S. authorities a recorded conversation with another trafficker who claimed to have made a quarter-million dollar payoff intended for the president himself.

In addition, President Hernández’s security minister—in charge of the country’s national police force—was accused by another former trafficker of helping to facilitate shipments of cocaine from Colombia to Honduras. As a military officer, he attended courses in counterinsurgency and psychological operations at the U.S. military’s School of the Americas in Fort Benning, Georgia.

Under his purview, noted the Washington Post’s Ishaan Tharoor, “the country’s security forces, enriched and empowered in the shadow of the U.S. war on drugs, have been accused of human rights abuses and targeting dissidents, including allegations surrounding the 2016 assassination of Berta Cáceres, an environmental activist and outspoken opponent of Hernández.”

In late December, unsurprisingly, the State Department endorsed the election tribunal’s dubious declaration of Hernández as the winner. It also called on both sides to refrain from violence.

“Amnesty International has accused the government of deploying ‘dangerous and illegal tactics to silence any dissenting voices,’ while the United Nations and Inter-American Commission on Human Rights have denounced torture of detainees in military installations and said they were ‘alarmed by the illegal and excessive use of force to disperse protests,’ reported the Guardian at the beginning of 2018. “But the US-backed government has rejected a request by the Organization of American States (OAS) to send a special delegate to investigate abuses.”

Bottom line: In Iran, U.S. economic sanctions are contributing to the misery that drives protesters to the streets. In Honduras, by contrast, U.S. military aid supports many of the security forces that are killing protesters much closer to home. Yet most pundits with a national platform in the U.S. media ignore Honduras while insisting that Washington must denounce the Iranian government for its crackdown on dissidents. Go figure.

Jonathan Marshall, an independent journalist and scholar, is author or co-author of five books related to national security or international relations, including, Cocaine Politics: Drugs, Armies, and the CIA in Central America. He previously covered "The Honduran Coup’s Ugly Aftermath" for ConsortiumNews.com.