Home > English > NEWS AND ANALYSIS > What is Normalization? 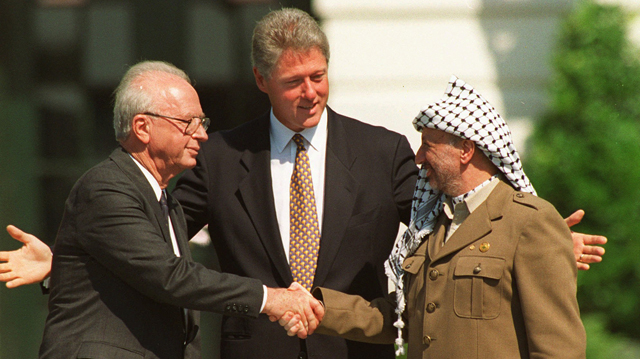 The concept of normalization emerged at the Camp David agreements signed by Egypt and Israel in 1979. The agreements laid the foundation for normalized political, economic, cultural, social and academic relations between Arab countries and Israel before solutions for a just and comprehensive peace were found. Under such conditions normalization can be understood as a process by which normal relations are manufactured in a context of abnormal circumstances - thereby divorcing Israel from its own acts of aggression, occupation and racism, and treating it as a political entity that is somehow independent of its political actions.

Normalizing discourse embraces East/West dialogues of clashing religions and civilizations. These dichotomies serve to distract from the core issues of the conflict, as if they were minor misunderstandings that could be resolved if only the invested parties would sit down together and speak as respected colleagues. This fallacy disregards the unequal balances of power between the two sides and attempts to delegitimise resistance as a tool for obtaining political and civil rights.

Normalization, the occupation of awareness

Beginning with the Camp David agreements, an emerging culture of defeat fostered actual political defeat in a self-fulfilling prophecy. This course was driven by a process that subordinated Arab and Palestinian political frameworks to Israel’s will - characterised by a series of concessions that concerned the very core of Arab and Palestinian national rights. These concessions lead to a crisis that ultimately damaged the legitimacy of leading Arab and Palestinian forces. Even more damaging, was the fact that Palestinian national movement representatives had begun to integrate and submit to the logic and conditions of the dominant side through a gradual process of capitulation and compromise.

The poor performance of the Palestinian leadership established the framework of a Palestinian political culture dominated by defeat; as evidenced by Palestinian and Arab participation in all subsequent agreements with Israel - Oslo, the Hebron Protocol, the Cairo security agreement, the Paris Economic Protocol and finally, the Roadmap agreement – despite their lacking even the minimum conditions needed to end the occupation and establish a just and comprehensive peace in the region.

In its cultural context this behaviour demonstrates a submission to the status quo. Since the power to reach and implement a solution rests almost solely in the hands of Israel and its ally the United States, any demands of the Arab political elite outside the framework imposed by the dominant parties, are viewed as radical, rebellious and unrealistic.

This political culture has deprived Arabs and Palestinians of the ability to apply pressure and invest in the status of Palestinian popular resistance. It has also contributed to the bolstering of Israeli arrogance by reinforcing its culture of paternalistic condescension and encouraging its rejection of meeting even the minimum of Palestinian demands. As a result, Israel has refused to recognize the “other”, and works solely to eliminate the legitimacy of their rights. In the end, the only option available to Palestinians in this framework is a complete surrender to the conditions of the dominant parties.

The culture of power and its stupidity

In light of this political and cultural environment, the elite in Israel began to lose its ability to comprehend the State’s hegemony with any sense of depth, subtlety or awareness. Consequently, it lost the ability to successfully – and respectfully - deal with those it had subordinated, let alone foster conditions conducive to equitable solutions and peaceful co-existence in the region.

Israel found itself burdened with contradictions that cannot be surmounted by victory in battle or fleeting military confrontations. Thus it moved towards reinforcing a culture of distorted self-perception that increasingly distances itself from rational political thought and behaviour. Consciously or unconsciously, it began feeding its own illusions and aspirations, free from constraints and oblivious to fundamental historical, geographical and demographic lessons. One of the most commonplace notions is, for example, the invincibility of the Israeli military and the perception that Israel alone is stronger than the Arab world combined.

The dominant elites in Israeli society have drifted politically and culturally so far into their own delusions that they are no longer capable of objectivity or rationality. Israel perceives itself as existing and operating outside of both history and reality as a “super-army”, “super-state” and “super-society”, capable of bending others to its unstoppable will. This self-actualized concept of power generates an ideology, culture, policy and consciousness of force, ultimately resulting in the concept of peace by force. It is of little wonder then, that following a series of consecutive victories, Israel found itself moving farther and farther away from ideas of peace and a sustainable sense of security and safety.

This imbalance in Israeli political practice is deepened by the elites’ willingness to execute U.S. strategies in the region. This process transformed Israeli society into a military force willing to pay the price of America’s ambitions in the region - even at the expense of its own aspirations. Israel, which is a small country, has not yet realized that regardless of its prowess, it is too small to devour its prey - the Arabs and Palestinians -either politically, culturally, historically or psychologically. As long as Israel overestimates the boundaries of its power, confrontation will ensue.

It would seem that Israel’s easy victories caused it to fall into the trap of colonialist logic. Despite the limits of its capabilities – and the fact it is placed in the midst of the Arab world - it seeks to impose its conditions with no consideration of regional realities. Instead of perceiving itself as an ordinary country with self-respect and respect for its neighbours, it sought absolute dominion, which threw it into a state of contradiction and friction that cannot be untangled in the midst of its vast surroundings.

The Israeli experience represents an overt example of a culture of force that lacks the most basic elements of wisdom - a culture that feeds the collective consciousness of the victor and expresses condescension and contempt for the defeated. It formulates strategy according to the megalomaniacal idea that “If the Arabs or Palestinians do not surrender to this amount of force, then they will heed and kneel to the use of more force.” Hence, the victor has become a hostage to its own superior power and seeks only to perpetuate that power through a cycle of military, political and cultural violence that pushes all sides into a constant state of terror.

According to this perspective, Israel must limit and obstruct the options available to Palestinians and Arabs at the negotiation table. Energy must also be focused on normalizing political, diplomatic, economic etc. relations with its neighbours and distorting the resulting local and regional contradictions of these relationships.

Among many countries in the Middle East, Israel is viewed as a secondary threat to those of other Arab nations in the region. In cases such as these, where Arab nations perceive a more immediate threat from other Arab states, Israel can exploit these fears and nominate itself as a strong ally against these fabricated or perceived primary threats.

In this context, the normalization of the occupation is the primary mechanism used to overcome the contradictions of the conflict in all its dimensions – historical, political, and psychological – by reducing the problems to a public relations campaign that distorts debates of the core problem (the occupation), and holds the Palestinian’s rejection of Israeli attempts to build normal relations responsible for the failure of the peace process.

Upon this assumption of Palestinian culpability, Israel can use the facts on the ground created by the occupation to blackmail Arab states and the Palestinians into making more political concessions. Thereby making the building of normal relations with Israel as an occupier a necessary prerequisite to participation in the peace process.

Normalization then, is a political, cultural and economic tool that allows Israel to dispense with the historical causes of the conflict and make its resulting realities seemingly banal. The most dangerous dimension of normalization policies is that Israel presents them as peace deals in themselves. Israel continues its practices of occupation, disenfranchisement and siege, whilst simultaneously advancing normalised political and economic relations as if they were somehow independent of the conflict. This approach both protects the occupation under the guise of ‘business as usual’ and delegitimizes the Palestinian struggle as if it were no longer relevant.