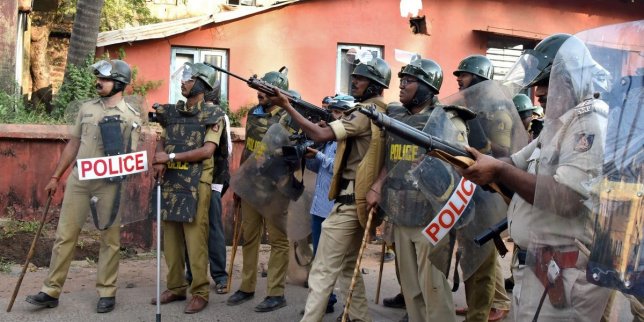 We are acutely aware of the unprecedented, non-violent yet militant struggles breaking out all over the country against the arbitrary and undemocratic actions of the Central Government of Prime Minister Modi, in particular the legislative passage of the blatantly unconstitutional Citizens Amendment Act (CAA) and the related moves to implement the anti-minority National Register of Citizens (NRC) and link it to the National Population Register (NPR) to harass minorities and create a permanent surveillance state with a Damocles sword hanging over the head of anyone in the country who dares to criticize the government.

We are also aware that while consolidating Hindutva and implementing the Sangh Parivar’s anti-Muslim agenda has been a constant feature of the (Bhartiya Janata Party) BJP government ever since it assumed power in 2014, the protests against its latest acts have been led mainly by a broad coalition of students and youth, with Muslim students only in the forefront in historically Muslim majority institutions like Aligarh Muslim University, and a broad front of non-Muslim and Muslim youth in other colleges and universities all over the country.

We know that until recently the violence perpetrated against minorities, mainly Muslims and Dalits, by Hindutva thugs like the lynch mobs, especially in states ruled by BJP, was ignored by police who behaved as passive onlookers, if not colluders, while individual Muslim men were brutalized, beaten and made to chant “Jai Shri Ram” before being killed.

However, the scale of the protests against CAA/NRC/NPR is such that violent repression of the protests by Hindutva groups alone is no longer feasible. It is the police in BJP ruled states and in the national capital who have clearly been ordered by their political masters to behave like thugs, beating and shooting protestors and breaking into the homes and shops of minorities, even those totally uninvolved, to teach them a lesson. The worst affected state is Uttar Pradesh (UP) where the police have begun to imitate and recreate the actions of Nazi gangs and SS stormtroopers of late 1930s Germany that took place then against the minorities, mainly Jews but also communists, socialists, and others.

“While protests across the country have seen students being fired at, peaceful protestors being detained and also suspension of internet, Uttar Pradesh has become a state that has seen the worst until now. With a BJP government in majority, and a Chief Minister like Yogi Adityanath who conforms to the Centre’s plan of action, Uttar Pradesh has become the worst example of excessive police action by a force which has been clearly given a free hand by the state with one agenda, to create and establish a climate of fear among people. This is being done to subdue the masses and to dissuade them from agitating against the government.”

A senior police officer in Meerut was openly captured on video threatening residents they would be packed off to Pakistan or worse if they dared to protest and raise their voice against the government. Other videos portray cops and plainclothesmen openly breaking into houses and looting cash and vandalizing property, or destroying minority-owned shops and stores. Not content with these depredations, police have had the effrontery in this state to levy heavy fines on protestors for destroying public property. In Lucknow, a very well-known advocate Mohd Shoaib was detained and, reportedly, his whereabouts are unknown. When his wife and colleagues went to the police station to inquire about him, they were detained too for a long period. Actress and activist Sadaf Jafar has been in jail since December 19, is reportedly ill but denied treatment. This is Nazi-style “goonda raj” with a vengeance but the cops obviously think they can get away with it since they either have political coverage at the highest level or are acting on the orders of their masters. Another state where police goondaism has been permitted is BJP ruled Karnataka. In Mangaluru, two Muslims were shot dead by the police who also barged into private homes and commercial establishments carrying out destruction of private property and beating people.

Meanwhile, Modi and his cohorts have begun lying about NRC and NPR claiming there was no plan to implement NRC when in fact there is a mountain of evidence to the contrary. Clearly, the mounting agitation against their policies is making the Modi-Shah duo edgy.

On the other hand, the BJP has begun to lose its control over state governments. Its latest loss was in the Jharkhand elections where it was ousted by a coalition of the Congress and a local party. Most non-BJP ruled states, like Kerala, Rajasthan, Madhya Pradesh, Chhattisgarh, West Bengal, etc. have strongly opposed CAA and vowed not to implement NRC or the BJP version of NPR. The Kerala Assembly passed a bill demanding repeal of the CAA with just one vote of a BJP member against.

Hopefully, the struggles will continue in 2020 to preserve India as a secular, democracy.