Home > English > NEWS AND ANALYSIS > We Must Support the Revolution in Iraq! 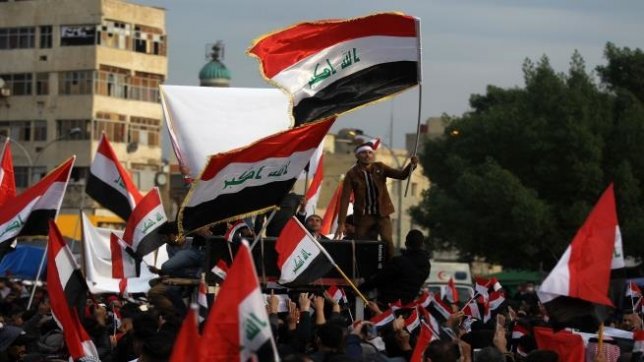 We Must Support the Revolution in Iraq!

On October 1, 2019, a popular protest movement ("Tishreen" revolution) erupted throughout Iraq, mainly in Baghdad and the cities of Basra, Najaf, Nasriyeh and Diwaniya. Led mainly by youth, precarious and poor workers, the movement has women at the forefront. Their demands include dignity, jobs and improved public services (including water and electricity). Rapidly, the movement grew demanding a complete change in the structures of the government.

The protests aspire to a profound revolution in politics. The main demands include an end to the widespread corruption that is plaguing the system, a non-denominational electoral system rather than the current confessional quota system and to put the interests of the people, including the political, social and economic reforms needed by the working classes, ahead of the objectives of foreign powers, with the United States and Iran in the lead, and thus to put an end to the relations between militias, political parties and foreign states that undermine Iraqi sovereignty.

Popular pressure against an unpopular government continued, and as a result, the Prime Minister, Adel Abdul-Mahdi, submitted his resignation two months after the movement started, on November 29. By the end of December, the Parliament adopted a new electoral law based on pluralistic principles. For the first time, voters will be able to elect candidates individually rather than on party lists, which may reduce the dominance of the major political parties. However, this new electoral law is criticised and deemed insufficient by the demonstrators to meet their demands for a renewal of the political class and a future independent Prime Minister.

An unprecedented popular movement in Iraq and the Arab world

Under the slogan "Silmiyeh!" (peaceful), the popular mobilization, however, has met with extremely brutal repression unleashed by the security forces (there are also reports of unidentified armed groups and snipers), a repression that has resulted in more than 500 deaths and 20,000 wounded according to the Iraqi Ministry of Health, as well as countless kidnappings, disappearances and arbitrary arrests. This repression has been described by Lynn Maalouf, Amnesty International’s Middle East Research Director, as a "full-on attempt to crush the protests in Iraq through instilling fear among the population".

Among the forms of violence aimed at quelling the movement, the Iraqi High Commission for Human Rights (IHCHR) has documented abuses against journalists, including arrests. On January 10, murder of the reporter Ahmed Abdul Samad of Dijlah TV and his cameraman Safaa Ghali, who were covering the Basra demonstrations, created shock waves within the journalist community. Dozens of journalists in the city of Basra responded by launching a campaign to highlight the dangers to the journalists’ rights of expression due to the use of excessive force and killings affecting demonstrators and journalists. According to information compiled by the Committee to Protect Journalist (CIJ), at least two more Iraqi journalists have been killed since the start of the demonstrations in October.

Geopolitics affecting a way out of the crisis

On January 3, 2020, the US government killing of Iranian General Qassem Soleimani in Baghdad brings a geopolitical dimension to the fore. Demonstrators condemned the US strike as an attack on Iraqi sovereignty while at the same time refusing to take a pro-Iranian stance. But this position, which is both anti-Iranian and anti-American, seems difficult to sustain. Iraq could once again become a battlefield for armed organisations hostile to the United States, the pro-Iranian Shiite militias, such as the powerful Kata’ib Hezbollah, which was led by Abu Mahdi al-Muhandis, another victim of the US drone strike.

In the eyes of Tehran, the Iraqi popular movement is worrying because it may change the current conditions of the mode of governance and thus mean the loss of local political-military relays, which are essential to Iran’s politics of influence. The movement is seen as part of a plan designed by the United States and its allies (Israel and the Gulf States) to overthrow the existing political system in Iraq. Unable to retaliate for Soleimani’s killing, pro-Iranian organizations in Iraq will now be in a position to direct their anger at those they consider "US allies" - the anti-government protesters. The targeted strike on Iraqi soil ordered by Trump can serve as a justification to target the demonstrators and thus instrumentalize the political crisis.

The Iraqi ruling elite, which rightly sees the revolutionary movement as the greatest internal challenge it faces, could also take this as an opportunity to become more repressive. As the leaders currently reject any real reform, they could intensify their efforts to eliminate all opposition. Moreover, due to escalating tensions, instead of listening to the demands of the demonstrators, the government’s attention is being diverted to crisis management arising from the actions of the United States and Iran. It is important that the Iraqi Government and the international community take into account the demands of the protest movement, which is a genuine guarantee of peaceful and democratic transformation.

Iraq must not become a battlefield again

With this escalation of hostilities due to the standoff between Tehran and Washington, the revolutionary movement in Iraq thus faces more adversity now than in 2019.

Canada maintains a good diplomatic reputation in Baghdad and must use its influence to reject attempts to turn Iraq into a battleground for settling scores between international powers. It must also publicly denounce the flagrant violations of the right to life, safety, security, freedom of opinion and expression affecting Iraqi citizens. At the same time, it must stress the importance of the demands of the popular movement and support the struggles for a pluralist and democratic Iraq, built and shaped by its own people.