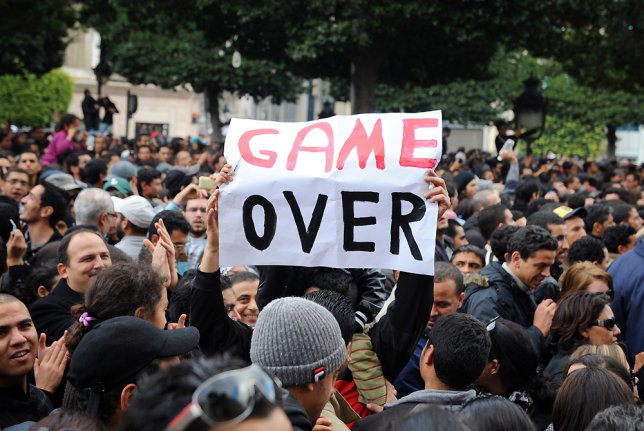 I just remembered this humoristic quote when reading Pompeo, the US Secretary of State’s speech at the American University in Cairo (January 2019), struggling hard with words to “re-define” the new US “evangelical” international policy, referring to his Bible he said he always keeps in his office to remind him of “God, His word and the Truth.”

Criticizing the Obama administration, which had tried to reach two main goals in the region, using diplomacy and negotiation instead of war drums and trying (without much success, we should say it) to get to a solution to the Israeli- Palestinian conflict, he advocated a new beginning for US policy. A large part of Pompeo’s speech was on demonizing Iran, threatening the Islamic State with “more punitive actions until it behaves like a normal country.”

No word was said about the massive human rights violations in three allied countries of the region: Egypt, where thousands of people have been arrested and imprisoned, forcibly disappeared or sentenced to death because of their opposition to the military regime; Saudi Arabia, where Trump has made it clear that he prefers arms deals to “American traditional values” such as human rights and democracy. Or about the Palestinian Occupied Land, where the Israeli security forces had killed 290 Palestinians, including 55 minors in 2018. Three months later, he spoke of the “religious duty” to protect Israel, using a messianic tone when he said that President Trump may have been sent by God to save Jewish people from Iran, a statement that may incite for more violence against Palestinians.

One thing is sure, human rights is not a priority for the Trump administration. In an interview with NBC News, Trump admitted that in his “America first” doctrine, he prefers arms deals with major countries in the region, including Saudi Arabia, to other “American values” such as promoting democracy and human rights. For Amnesty International, however, “this approach only encourages other countries to adopt a disregard for basic human rights standards and risks weakening international, as well as regional frameworks, placing the rights of millions of people around the world in jeopardy.”

Recently, Pompeo launched a new Commission on Unalienable Rights, aimed at giving a” fresh thinking” about human rights “based on natural law and natural rights.” This reference to “natural rights” worries advocates; and there are good reasons for concern, as it could express a narrow, more conservative vision of human rights since most evangelists, including Vice President Mike Pence, consider religious freedom as “our first freedom.”

Let’s go back to 1948, when the USA, after the horrors of two World Wars, played an important role in the adoption of the Universal Declaration of Human Rights. Taking the lessons from two most devastating wars, the international community eventually understood that human rights are inherent in human beings regardless of their race, sex, religion or any other status.

The danger of involving religious beliefs in human rights is that those who speak in the name of God could interpret his intentions/ sacred law according to their whims, justifying violence, racism, bigotry or misogyny. Thus, LGBT rights are threatened by Evangelists in Trump administration and so is same sex marriage:” God made Adam and Eve, not Adam and Steve,” they say with intended irony.

Not only LGBTs and Women

Last week, the Guardian reported that the Trump administration had come under fire when imposing restrictions on USA foreign aid to groups that provide abortion services and Amnesty International considered the Trump administration “politicization of human rights” which “appears to be an attempt to further hateful policies aimed at women and LGBT people, is shameful.”

Worse still in 2018, US officials tried, among other things, to replace the word gender with “women”. “Sex means a person’s status as a male or female based on immutable biological traits identifiable by or before birth,” says a memo of the Department of Health Department and Human Services, challenging a decision taken by Obama administration to loosen the concept of gender so as to include transgender. This decision would, according to New York Times, threaten the rights of 1.4 million Americans who recognize themselves as “a gender other than they were born with.”

Internationally, the new panel created to advise Pompeo on the “re-definition” of human rights in relationship with American diplomacy runs counter all human rights reports. In fact, it goes beyond a “hateful policy “targeting women and LGBT” groups. Its narrow religious view is in perfect tune with Trump’s thinking, that for the sake of the so-called national interest, favors allies and friends, not holding them accountable for any human rights violations.

In fact, Trump’s creed “America first” seems to reshape foreign policy according to his background as a businessman, focusing on three major concerns: undoing “unfair deals” to promote American commercial leadership, protecting Israel at the expense of Palestinian rights, and strengthening alliances with oil -rich countries in the Middle East.

That’s why he has been engaged in a merciless trade war with China which has, according to New York times, led to catastrophic results as Chinese investment in Us has fallen by 88%.

With Saudi Arabia, one creed summarizes his relationship with the Kingdom: “take their money, take their money,” as he tweeted once. The scandalous killing of journalist Jamal Kashoggi? Trump refused a UN request to investigate his murder although(because?) the UN Special Rapporteur pointed accusing fingers to Saudi authorities and said clearly that there is credible evidence that Crown Prince Mohamed Ben Salman and other Saudi officials were responsible.

Throughout its history, the USA has mostly thought that moral values have to complete national interest. Hans Morgenthau, who worked for the States in the beginning of the twentieth century, wrote a book “In Defense of National interest”. His conclusion was “The Nation” should not subordinate its national interest to any other moral standards. Because if it does, it would become “the prey and the victim of other nations.” But could national interest harmonize with human rights?

Jimmy Carter (1977-81), for instance, was one of the few presidents who believed that human rights could contribute to national interest as it would lead to a more stable and peaceful world.

But, although the US has never been a champion in human rights, there has not been, in the last decades, such conspicuous (and often shameless) support for dictators and never have domestic and international laws and institutions been so slighted. And that is done in the name of three mottos: religion, populism and national interest. Giving another meaning to “human rights”? It’s distorting them by giving the words a narrower meaning. In the book “nineteen eighty-four”, George Orwell said: “It is a beautiful thing, the destruction of words.” That is exactly what totalitarian regimes are always looking for. And Trump administration is giving them good reason for that.